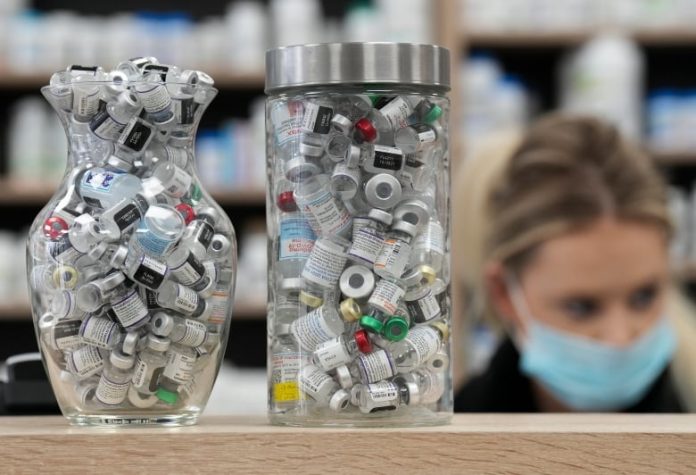 Starting next year, pharmacists in Ontario will be able to assess and prescribe medication for minor ailments, but some are calling on the province to expand that list and make the changes sooner to alleviate some of the pressure on the health-care system.

Justin Bates, the CEO of the Ontario Pharmacists Association (OPA), says the changes are a good first step but he would like to see more services added.

“We need to expand it. Ontario is taking a very cautious approach with only 13 conditions,” Bates told CBC News.

“There are provinces that allow pharmacists to prescribe for all medications except for narcotics and controlled substances.”

The Ford government is set to expand the scope of practice for pharmacists in January 2023. The list of 13 minor ailments they’ll be able to prescribe medications for includes pink eye, urinary tract infections and allergic rashes. While pharmacists welcome the news, they say more can be done to add capacity to a system that’s already under strain.

Since the onset of the pandemic, pharmacists have performed COVID-19 testing and administered vaccines.

Kyro Maseh, a pharmacist at a drug store in Toronto’s east end, says while he is glad to see the changes, they are set to start “too late.”

“We need this now,” Maseh said.

“It should include other minor ailments; we shouldn’t have to go through all of this trouble just to give this patient something for their osteoporosis that could potentially prevent a fracture.”

The changes would apply to the following conditions:

All of the above are short-term ailments that would not require lab results and are low-risk to treat.

But Maseh says the antiviral treatment for shingles should be included.

He says the same goes for Paxlovid, an anti-viral drug often prescribed for COVID-19 that requires a doctor’s prescription. The OPA says pharmacists should also be able to prescribe it.

Maseh says since it has to be administered within the first five days of the onset of COVID-19 symptoms, having to get a doctor’s prescription for Paxlovid wastes precious time.

“This takes up resources from the system as a whole and as a consequence we all suffer for it.”

Another challenge is not having a unified electronic health record, Bates says, “so that we don’t have challenges of repeat visits to the hospital.”

Bates says the lack of a unified record often leads to miscommunication between hospitals and pharmacies. He says that can lead to mistakes that get patients readmitted to hospital soon after they’re discharged.

A University of Toronto study appears to back up Bates’s assertions.

The research found that nearly 35 per cent of avoidable emergency room visits could be managed by pharmacists prescribing for common or minor health issues.

Pharmacists should be able to help fill those gaps in care, says Lisa Dolovich, dean of the Leslie Dan Faculty of Pharmacy at the University of Toronto. She says the research shows that when pharmacists are able to review prescribed medications with patients, they can identify and resolve potential problems before they happen.

“If people have been discharged from hospital and they get a review done by their community pharmacist, that actually helps prevent them from being readmitted to the hospital in a short period of time,” Dolovich said.

“We have 17,000 pharmacists in Ontario, we have over 5,000 technicians, we have over 1,500 pharmacy students. So that’s a pretty large number of people who we think can be part of the solution.”

The Ministry of Health has confirmed to CBC News the regulatory amendments that will authorize pharmacists, students and interns in Ontario to prescribe medications for the listed ailments.

“Pharmacists, through their training and formal education, possess in-depth knowledge and strong clinical skills that are a critical part of the health-care system,” a ministry spokesperson said in a statement.

“The changes that have been made to the scope of practice for pharmacists will provide greater convenience and choice to patients to obtain health-care services.”

But Bates warns that patients will have to pay for the services and says they should be publicly funded.

“Your socioeconomic status shouldn’t determine whether you can access the services if we’re truly going to add capacity and create more access throughout the system,” he said.

“We can’t shy away from the realities that costs are going up everywhere, patients and the public and health-care providers.”