We ‘ll fight against restructuring that affects our members – PENGASSAN 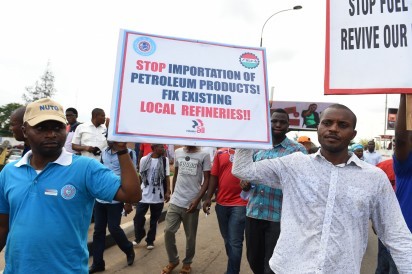 ABUJA – THE petroleum and Natural Gas Senior Association of Nigeria, PENGASSAN, has vowed to kick against any restructuring in the oil and gas industry that will have a negative effect on its members and anything that could make the workers redundant.

Members of Petroleum and Natural Gas Senior Staff Association of Nigeria, PENGASSAN during the picketing of General Electric, GE, in Lagos.

President of PENGASSAN, Comrade Francis Olabode Johnson who made the vow in his post election speech after his re-election in a keenly contested election reiterated that security of his members’ jobs would form the fulcrum of his regime.

He said, “Under no guise will we allow our members to lose their jobs. We will fight any form of unprocedural redundancies or restructuring that affects our members.

“We are ready to collaborate with the government and other agents towards the development and growth of our industry.”

Comrade Johnson in the election at the association’s triannal delegates Conference in Abuja defeated two other contestants Comrade Mohammed Saleh of NAPIMS and Comrade Eze Emmanuel Eze of NPDC.

The newly elected officers will be joined by six other officers who had earlier been elected at the various zonal elections that took place on May 25th 2017 in Abeokuta, Ogun State; Yola Adamawa State and Asaba, Delta State.

However, the elections of the Zonal Chairman and other three notable positions for Port Harcourt Zone were nullified due to alleged irregularities.