We are not part of Victoria Island, Lekki flooding — Eko Atlantic – Vanguard Newspaper 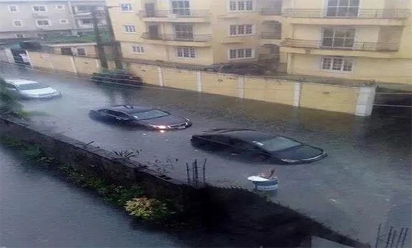 FOLLOWING allegations by some  environmentalists and Lagos residents,  penultimate week, that Eko Atlantic City, located beside the Bar Beach along Ahmadu Bello Way, Victoria Island, Lagos was partly responsible for the severe flooding that submerged the entire Victoria Island and Lekki corridor due to torrential rainfall that weekend, the management of the ongoing emerging city has debunked the allegations.

The environmentalists and residents had noted that the construction of the sprawling project beside the Atlantic Ocean had narrowed the course of the ocean at the bar beach end with the reclamation of part of the ocean for the construction of the multi-billion dollars city. According to them, the water that would have been retained within the ocean in times of surges is now being forced to flow to the neighbourhoods by the tide, thereby causing floods.

But the management of South Energyx Limited, developers and promoters of the city while debunking the allegations, told Vanguard Homes & Property that “Eko Atlantic City has not in any way contributed to the incessant flooding of Victoria Island, Lekki, and other adjoining areas.”

Managing Director of South Energyx, Mr. David Frame, who said the project is aimed at changing the face of the Lagos shoreline by finding a permanent solution to the incessant ocean surge that is threatening Victoria Island by reclaiming and protecting its infrastructure, added that Eko Atlantic project neither contributes nor interferes with the drainage of Victoria Island or Lekki. According to Mr. Frame, “In the current stage of development, the site has minimal hard surfaces, meaning that most of the rain water infiltrates into the sand.

“When fully developed, the topography and infrastructure of Eko Atlantic will manage the storm water through an internal drainage system with a major central canal that connects to the sea as designed, This ensures that no additional surface water will flow to Victoria Island or Lekki.

“Also important to note is that the storm water drainage of Victoria Island and Lekki is designed to drain towards the Lagos Lagoon, as such the presence of Eko Atlantic does not interfere with this in any way whatsoever. Furthermore, the general topography of Victoria Island slopes towards Ikoyi. This is readily observed along Akin Adesola Road linking Ahmadu Bello Way to Ikoyi via Falomo Bridge. The slope is clearly discernible.

“The city has been designed to protect Victoria Island and parts of Lekki from coastal erosion and flooding. The construction of the project is carried out in line with international best practice. The company works with notable companies who have executed similar projects in other countries. One such company is Royal HaskoningDHV, the appointed marine engineers for the Eko Atlantic Project. The team is on ground to monitor the daily progress of works and ensure compliance to International standards.

“Eko Atlantic City has constructed over six kilometres of the 8.2 kilometre long “Great Wall of Lagos”. It is a revetment which serves as the defence structure. The basic principles of revetment, as a proven engineering solution for river and coastal protection, have been used for centuries, if not millenniums, around the world. The sea wall is designed and tested to handle the worst storms in a hundred years, putting into consideration global warming and rising sea levels”, South Energyx boss stated.