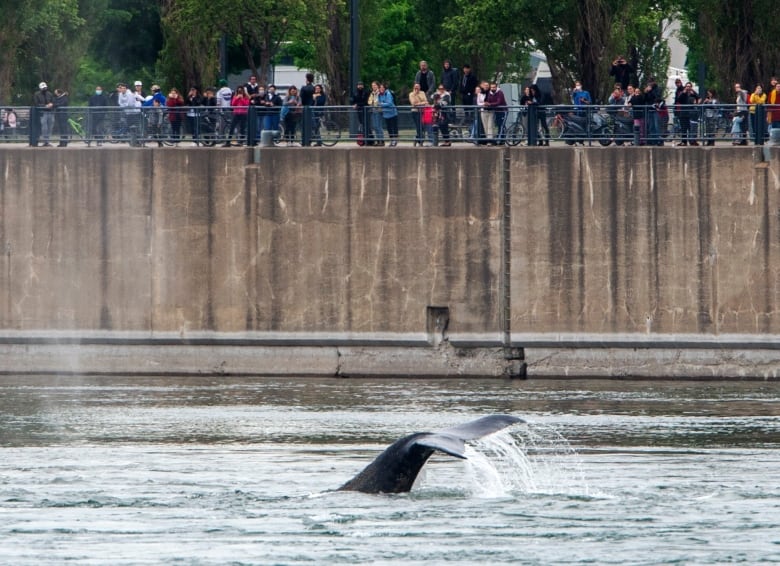 A wayward humpback whale that had enchanted Montrealers and drawn crowds near the city’s Old Port appears to have died.

The whale’s lifeless body was seen Tuesday morning, drifting down the St. Lawrence River near Varennes, about 30 kilometres downstream from the city.

Simon Lebrun, a maritime pilot, spotted the whale near Beauregard Island and posted a video on social media.

Robert Michaud, co-ordinator for the Quebec Marine Mammal Emergency Network, said he doesn’t doubt that the whale in the video is the same one spotted by Montrealers last week.

Michaud said a team will be on-site in the next few hours to assess what to do with the carcass. They will be working with Fisheries and Oceans Canada and the faculty of veterinary medicine at the University of Montreal.

“We don’t want to let it drift,” Michaud said.

The whale was last seen swimming near Pointe-aux-Trembles Sunday morning.

According to Michaud, it was the first time a humpback whale made its way into Montreal waters. It was first spotted in the city on May 30, near the Jacques-Cartier Bridge.

The body of a humpback whale is now drifting down the St. Lawrence River after a week of visiting near the Old Port of Montreal. 0:50

Far from its natural habitat

Experts had hoped that the humpback was swimming home to Tadoussac, where it belongs.

“We definitely thought that she was heading back downstream, for the estuary and the gulf,” said Michaud.

Michaud said that while the whale seemed like it was in good health, it was facing several challenges on its journey back home.

The humpback, far from its natural habitat, may have been dehydrated after swimming so long in the fresh waters of the St. Lawrence River.

The whale was also in a busy shipping zone, Michaud said, and it may have collided with a vessel.

Humpback whales are one of the largest marine mammal species, measuring up to 15 metres long.

Montrealers, who had flocked to the Old Port with cameras in tow to watch the whale, mourned its death on social media Tuesday.

Some said the whale was a bright spot in a chaotic time, and expressed sadness about its death.

Others said this incident is a reminder of the importance of keeping the St. Lawrence River clean from pollutants.