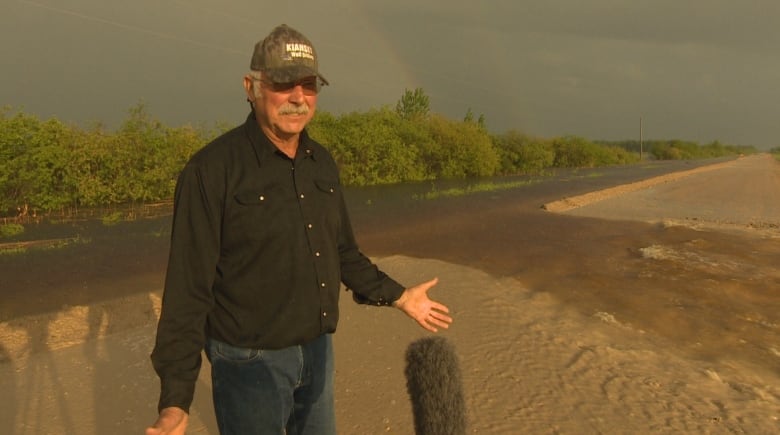 Residents of a small rural community in southeastern Manitoba are scrambling to prevent flooding from causing further damage after a rainstorm prompted some residents to leave their homes Monday night.

The rural municipality of Stuartburn, near the U.S. border, declared a state of local emergency on Monday morning after torrential rain led to overland flooding of the Rat River and washed out roads on Sunday night.

Manitoba’s Hydrologic Forecast Centre issued a flood watch for both northwest and southeast Manitoba, including the Whiteshell lakes, on Monday.

David Kiansky, the reeve for the community, said Tuesday morning that he estimates as many as 12 houses could be flooded out.

He said he’s never seen anything like it before, even during the Red River flood of 1997, when much of southern Manitoba resembled a large lake.

Dikes that have been in place for 40 years are being overwhelmed by the fast-moving water, he said.

“It’s a scary situation here, with a torrent of water that come in. That’s the problem here right now,” he said.

Even people who have lived all their lives along the Rat River haven’t seen anything like it before, he said.

No evacuation orders are in place, but people living in four homes voluntarily left due to the flooding Monday.

Though crews are out sandbagging, Kiansky is worried they won’t be able to build dikes fast enough to protect homes, and he suspects more people will have to leave.

Kelly Stadnyk, who has lived in the RM of Stuartburn for 28 years, woke up Monday morning to see her entire yard was flooded.

She said she’s not as worried about her home because it’s high off the ground, but she does worry about roads being flooded out.

She’s also worried for her friends and their homes.

“I know that most of my co-workers that live in town, their sump pumps have not stopped going off. It’s constant,” she said. “So if the power goes out, they’re in trouble, so that’s scary.”