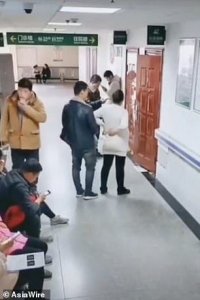 A husband in China turns himself into a human chair so his heavily pregnant wife could sit on his back while she was waiting to see her doctor at a hospital.

In a video shared online by police and liked by millions of people, the wife is seen struggling to stand with a bulging tummy as she waited outside a consultation room.

A number of people can be seen sitting in the waiting room but none gave up their seat for the woman who was already experiencing numbing legs.

After a while, her husband bends and gestures for her to lean against him. He then passed a water bottle to his wife to quench her thirst.

The video was posted onto Hegang police’s official account and it has been liked more than seven million times.