Was Nigeria created for Dangote or was Dangote created for Nigeria? – Femi Fani-Kayode asks after FG exempted Dangote Cement from land border closure 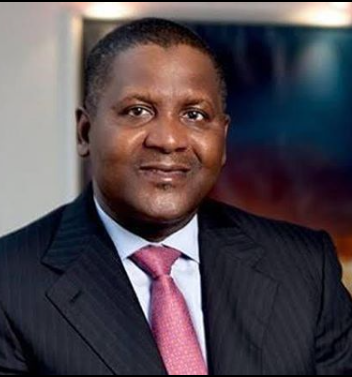 The Nigerian government has allowed Dangote Cement to resume exports across its land borders which have been closed for over a year and this has raised brows.

In October 2019, the Federal Government of Nigeria ordered the complete closure of the Nigerian border, placing a ban on both legitimate and illegitimate movement of goods in and out of the country.

President Muhammadu Buhari’s administration has now given permission for Africa’s biggest cement producer, Dangote Cement, to export to Niger and Togo in the third quarter for the first time in months, Michel Puchercos, chief executive officer, said on an investor call Monday, November 9.

BUA Group and a gas company have also received presidential approval to move goods across the land borders, Joseph Attah, the spokesperson for Nigerian Customs, said.

A number of Nigerians reacted by asking the reason for this preferential treatment.

Former Aviation Minister, Femi Fani-Kayode reacted on Instagram by sharing a photo of Dangote and writing: “During the Covid19 lockdown Dangote trucks were allowed to drive through Ogun state but everyone else was stopped.

“Today Dangote trucks are allowed to go through our land borders but everyone else is stopped. 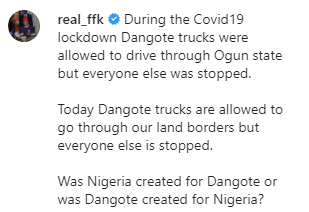 Atedo Peterside, the founder of Stanbic IBTC Bank Plc, also reacted, tweeting: “Allowing legitimate exporters & importers to move their goods across the border should be a no-brainer. Why refuse everybody else & allow only one company (Dangote)? This is why some of us argue that the Nigerian economy is rigged in favor of a handful of well-connected persons.”

He later added: “I have since learned that Bua Group were also allowed to export goods through Nigeria’s “closed” land borders. FG should please accept that what is good for the goose is also good for the gander. When will the FG consider small honest businesses that are not so well-connected?”