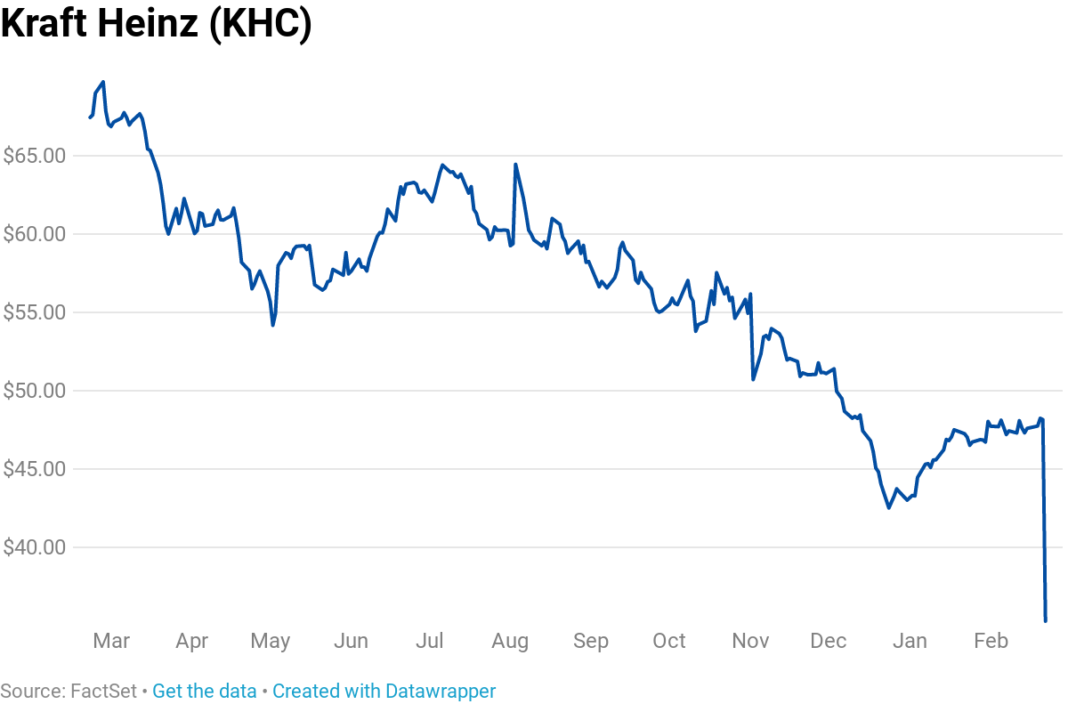 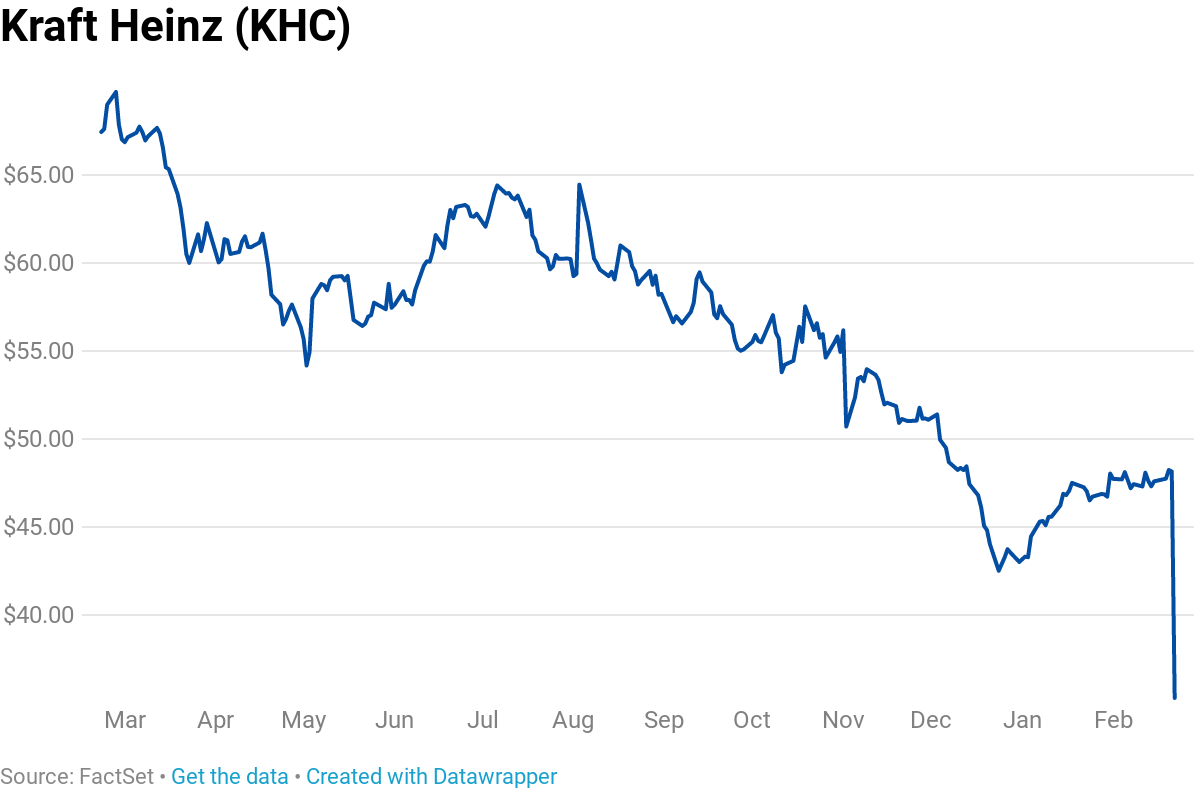 Warren Buffett’s Berkshire Hathaway lost more than $4 billion in a single day after shares of Kraft Heinz — one of the investor’s largest holdings — plunged on slew of bad news including a dividend cut and a government investigation.

Stock of the packaged food giant, whose products include Heinz Tomato Ketchup, Jell-O and Kraft Macaroni & Cheese, plunged more than 25 percent shortly after the opening bell Friday. And for Berkshire — which owned more than 325 million shares at the end of 2018 — the losses are steep.

At current levels, Berkshire Hathaway is down $4.2 billion on paper in Friday’s session alone. Kraft is Berkshire’s sixth-largest holding behind Apple, a few banks and Coca-Cola.

As one of the world’s most revered money managers, Buffett is renowned for his bargain-based buying strategy and molding it into a sustainable, no-frills investing philosophy. Though simpler and perhaps less exciting than others tactics on Wall Street that try to time the market with short-term trades, Buffett’s method has long served as the backbone for many looking for reliable, drama-free returns over a longer period.

As such, double-digit stock moves are almost unheard of for the managers at Berkshire Hathaway, who gravitate toward sizable dividends and strong household brands with steady cash flow. Going forward, Kraft Heinz will award shareholders with a dividend of 40 cents each quarter, a marked drop from the 63 cents it paid out prior.

But Buffett’s affection for brands through investments like Kraft Heinz and Coca-Cola have come at a cost in recent years amid a shift among consumers toward healthier and local food and beverage options, which has weighed on sales growth of these once American staples.

Though Coca-Cola stock is up more than 5 percent over the past 12 months, the beverage giant has slipped more than 4.5 percent this month after management issued a gloomy 2019 profit projection during its fourth-quarter report. Kraft Heinz was down more than 28 percent in the past 12 months even before accounting for Friday’s losses.

But despite the secular shift away from prepackaged snacks and mounting stock losses, Buffett defended the investments as recently as May 2018 in an interview with CNBC’s Becky Quick. 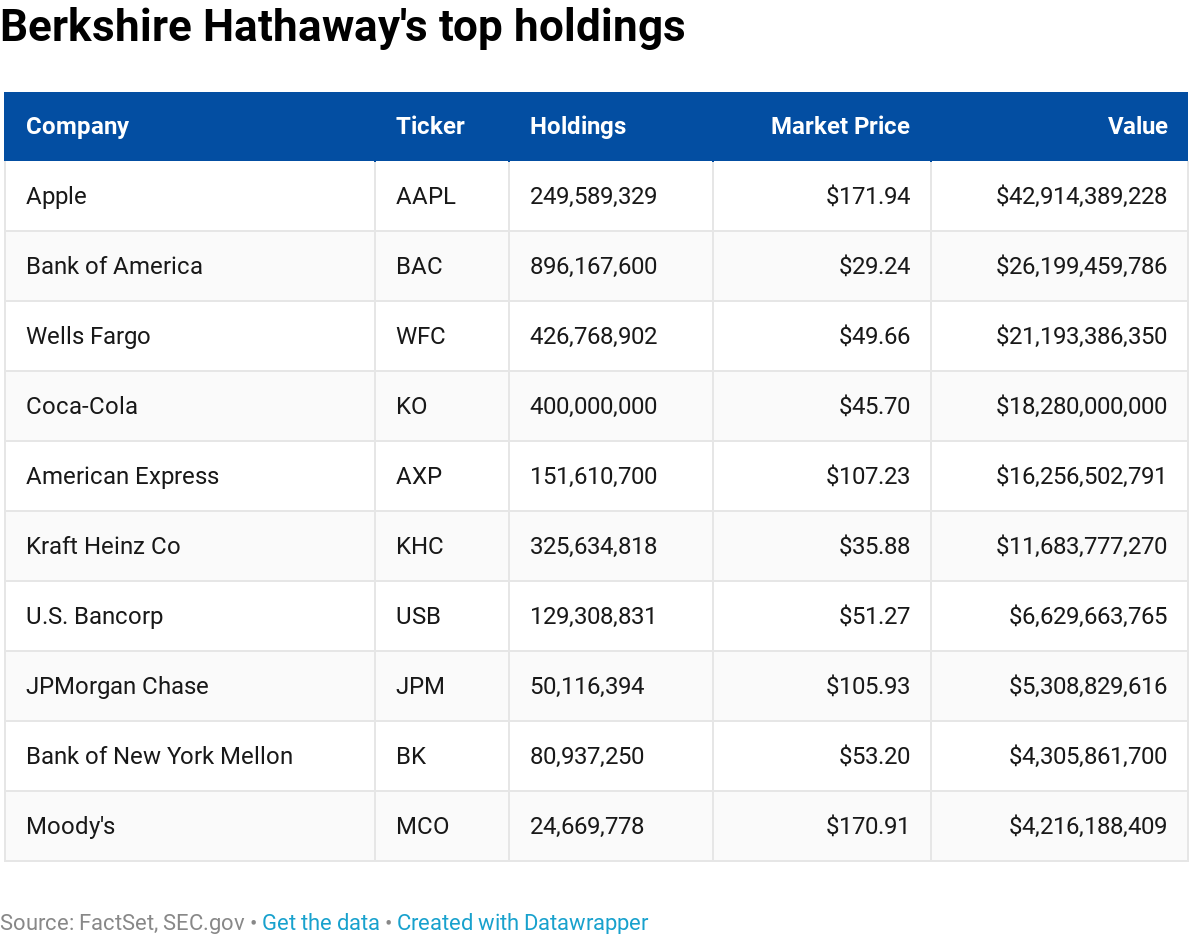 The investor did acknowledge that the power behind Kraft Heinz’s brands appeared to have eroded over the past several years as a result of shifting dietary trends and negotiations between retailers and big packaged food brands.

Those fears appeared confirmed Thursday, when Kraft Heinz said higher costs and meaningful pressure on the value of its brands hampered its fourth-quarter results. Write-downs to the value of its Kraft and Oscar Mayer brands of $15.4 billion caused the company to notch a fourth-quarter profit loss, representing a notable about-face following years of stringent cost control and industry-leading margins.

Kraft Heinz Chief Financial Officer David Knopf went so far as to suggest that the company could continue to sell stagnant brands as it looks to remedy the bottom-line miss.

“The recent transactions we have announced, India beverages and Canada natural cheese, provide a good template of precedent for additional actions to exit areas with no clear path to competitive advantage and sell assets at strong valuations,” the executive said during Thursday’s earnings call.

Kraft Heinz reported earnings of 84 cents per share in the fourth quarter thanks to the write-down of its assets, down 6.7 percent from a year ago; it posted fourth-quarter revenues of $6.89 billion. Both metrics fell short of analyst expectations.

The company also said the Securities and Exchange Commission issued the company a subpoena in October as part of an investigation into its procurement accounting policies.

Kraft Heinz said it launched an internal investigation into the matter after receiving the subpoena. Following its investigation, Kraft Heinz said it posted a $25 million increase to the cost of products sold after determining it was “immaterial to the fourth quarter of 2018 and its previously reported 2018 and 2017 interim and year to date periods.”