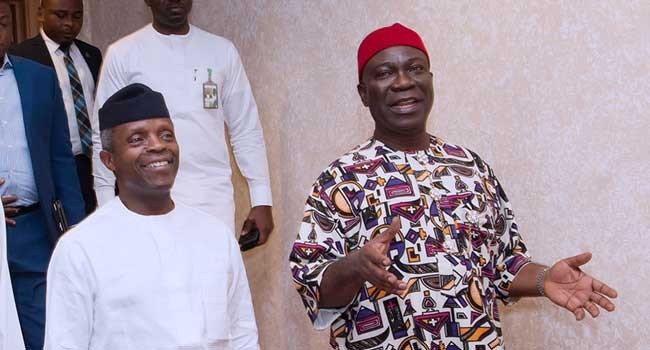 The Vice President Yemi Osinbajo this evening met with the deputy senate president, Ike Ekweremadu, over the chaos at the National Assembly earlier on Thursday where the mace was carted away by touts allegedly sponsored by suspended Senator Ovie Omo-Agege.

Speaking to state house correspondents after the meeting, Ekweremadu described Omo-Agege’s action as a threat to democracy.

”Well I am sure you are aware of the Senate invasion today and we have to come and brief the Vice President because the President is not in town, so it was appropriate for him to know what transpired because we run democracy we are all in one government and it is the responsibility of the President or the Vice President to ensure that law and order in the country and once we have this kind of major development it is important that he is briefed at the earliest opportunity. The Senate President is out of the country, its therefore my responsibility to come over and brief the Vice President, he has sympathized with us over what happened and he is going to join forces with us to ensure that we get to the root of the matter to make sure that this will not happen again.