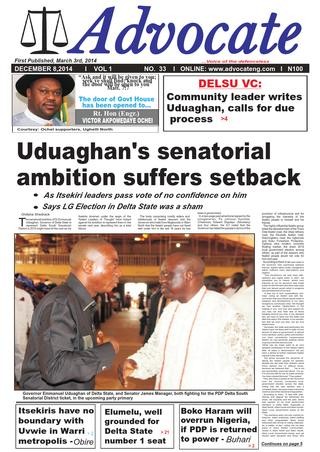 ONE attribute of democracy is the organisation of elections as at when due  at all levels of governance. Dr Arthur Ifeanyi Okowa’s  attitude to this, is regenerativeness  aas opposed to what obtained during the era of his predecessor, Dr. Emmanuel  Uduaghan who apointed sole administrators to mann the local government councils. For the eight years of Uduaghan as governor, he was only able to organise local government elections once, that is at the twilight of his exit from office, an aberration that could only be tolerated in a conservative political environment.

Indeed, failure to organise election  as at when due is a popular antithesis of all that liberal democracy stands for and a verile tool of autocrats hence the detour of the Okowa administration is praiseworthy. Though some issues need review.

Let the people choose who lead them. And since  it became public knowledge that elections would be held to choose those who would run the affairs of the third tier of government in Delta State come October 2017, the political clime has grown a little restive with political aspirants into various positions warming up. The demonstrations of those intentions have not been too explosive beyond graffito like expression on public places and on the walls along the streets. However, one occasion to showcase political intentions was during the governance visit on June 23, 2017 to Sapele in his mega rallies across the three senatorial districts of the state.

So far, politicians’ attitude across the state to the supposedly upcoming election appears lukewarm and greatly contradicts what happened in Lagos State.

On a recent visit to Lagos, one observed the political fire of politicians at the local level in preparation for the election. The streets were adorned with posters of intending chairmen and councilors. Hand bills were commonplace. Politicians seeking offices should be able to sell their programmes to the electorate during these campaigns and not  depend on godfathers. This is an independent step in the growth of democracy, for a candidate for an office to be an independent motivator within the manifesto of his party.

Consistency in the framework of the party is the element that makes for party unity. But not carpet crossing seeking where one’s bread could be buttered. This is retrogressive politics though common place in Nigeria. It is politically immaturity for people of the same party to challenge an office holder. This smacks of lack of party unity. If party supremacy reigns, it becomes scandalous when party members challenge (office holders) within a party. Those on such mission without any visible misconduct on the part of those incumbents are on a self seeking adventurism. They are seeking for perceived wealth to be got from the office but not power or leadership. They need to be sanctioned but not the frail support of so called political godfathers who even sponsor same.

In some parts of the state, there are politicians who carpet cross from party to party. Some even get back to sponsor candidates. Where is the mentor factor in this. It is an anti-party behaviour and a source of corruption. It must not be encouraged.

Politics could be practised based on family tradition. It almost happened in the First Republic when we had three major political parties but was scuttled in the west due to crises in the then Awolowo led Action Group, AG.

But I always cite late Jeremy Thorpe of the Liberal Party in Great Britain. For decades, he led the party. All their leaders and followers till date claim their ancestral leanage to the party’s glorious days  which they still yearn for. No carrot ever tempted Thorpe and till date Liberal Party members believe in the party’s ideology. They don’t waiver.

Let us examine another hypothesis for the demonstration of party unity. Assuming President Mahammadu Buhari is ready for re-election in 2019, no APC member should challenge for the sake of party development and unity. The PDP can fight within to get the best candidate who would give him a tough fight.