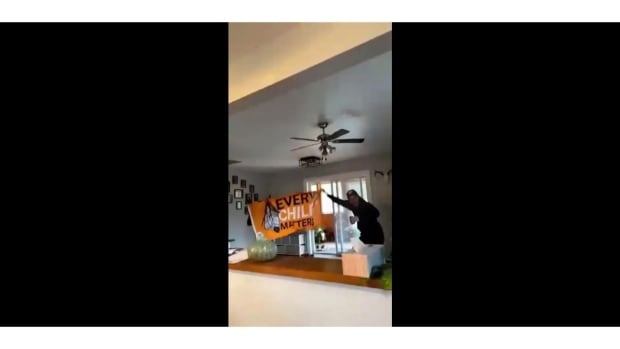 People in two northern Ontario communities are taking action after a series of social media videos were posted showing young adults dancing with an Every Child Matters flag while at a house party.

On Friday afternoon, residents of the town of Massey, Ont., and nearby Sagamok Anishnawbek First Nation will walk together to educate community members about the Indian residential school system and denounce the videos.

In a public address posted to YouTube on Feb. 11, Sagamok Anishnawbek Chief Alan Ozawanimke said the videos were recorded at a house party in Massey the weekend of Feb. 5:

“They [the videos] triggered our elders and grandparents as those who hold a living memory of their personal experiences away from home, attending these institutions of coercion, oppression and subjugation, subsequently dealing with the impacts when they return home,” Ozawanimke said in his address on YouTube.

“With sadness and disappointment, they felt the pain of their grandparents, relived in watching a video. They disturbed our families as they relive their traumas and grief associated with the residential school experience.”

Const. Bev Gauthier of Manitoulin Ontario Provincial Police told CBC News that citizens reported the videos to police on Sunday, and they are under investigation.

Gauthier said that as of Thursday, no charges had been laid against anyone involved in the videos.

Obviously, we’ve … torn some wounds open with this, and that’s all I’m hearing is that there’s a lot of hurt going on.– Glenda Massicotte, deputy mayor, Township of Sables-Spanish Rivers

In a Feb. 9 council meeting of the Township of Sables-Spanish Rivers, which includes Massey, some councillors raised the issue of the videos.

“Obviously, we’ve … torn some wounds open with this, and that’s all I’m hearing is that there’s a lot of hurt going on,” Deputy Mayor Glenda Massicotte told CBC News.

Massicotte said she is working with other councillors to draft a statement for the next council meeting on Feb. 23 to discuss the videos in greater detail.

Jayson Stewart, an educator and former council member, said he was horrified by the videos.

“When I saw that the Township of Sables-Spanish Rivers wasn’t being very proactive in any type of public statement, I knew that it had to be a grassroots movement,” Stewart said.

“So I pitched the idea through the Sagamok Facebook page that it would be nice to have some type of a candlelit vigil or a walk of sorts in the community.”

Stewart connected with a number of Sagamok residents, including Cynthia Owl, who helped organize the walk.

Owl said both her father and grandfather were residential school survivors.

“So it just kind of shook me to the core,” she said about the videos posted to social media. “It kind of opened up a lot of wounds. “

Owl said her grandfather is deceased, but she showed the videos to her father, who rarely speaks about his residential school experience.

“He couldn’t finish watching them,” she said. “He was just, it just hurt.”

“But you know, it’s one thing to say, ‘I’m sorry,'” she said. “It takes time. It really does. And actions do speak volumes, for sure.”