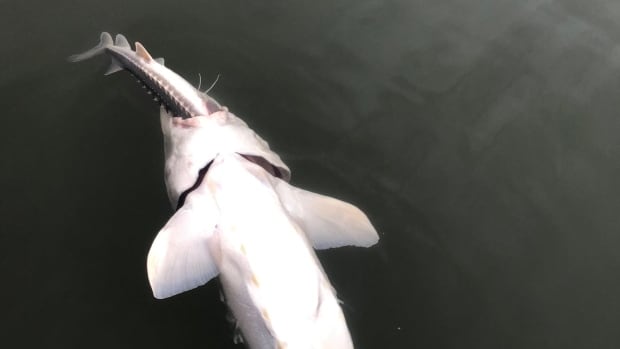 Colin Bond was in his boat on the Fraser River near the Golden Ears Bridge on Feb. 5 when he came across a bizarre sight.

Something white in the water had caught his eye and he quickly realized it was an upside-down sturgeon.

“It wasn’t moving, so I thought it was dead,” Bond said.

He then noticed something else.

“It had another smaller sturgeon in its mouth, and it was probably about 20 inches long and I thought it was dead at the same time.”

The Fraser Valley is home to some very large sturgeon and when the prairie flooded, it meant the sturgeon got into places they aren’t supposed to be in. We hear from a volunteer who helped rescue several of the big fish. 8:33

Bond said when he tried to grab the sturgeon’s fin, it jumped to life and swam away. He motored around the area searching for the fish, but didn’t see it again.

Bond, who has been fishing on the river for 30 years, said he has never seen anything like it.

“They’re just looking for food and just happened to find another little sturgeon and I guess he was trying to eat it,” he said. “That’s the only thing I can think of.”

Bond volunteers with the Fraser River Sturgeon Conservation Society, which shared a photo of his discovery on social media. The society said it is concerned about the survival of sturgeon due to habitat loss and lack of food supply.

“This observation of, possibly, cannibalistic behaviour is a first for adult fish and occurs on the heels of a stressed environment for the Fraser River after the floods and low returns of salmon and eulachon,” the group said in a Facebook post.

One possible explanation, he says, is that the two fish may have been feeding in close proximity of one another and the big sturgeon sucked in the smaller one. Sturgeon, he said, tend to feed off of dead fish or things on the bottom of the river, rather than catching live fish and eating them.

“Because there’s not a lot of food in the river these days, they’re going to be more concentrated and potentially be in really close quarters with each other,” he said.

“This sort of thing can happen when you’ve got a big suction-type of mouth and smaller fish around. You never know what you’re going to get in your mouth.”

“If they have an issue, then it’s a real signal to the health of the Fraser River, so it definitely makes us pay attention,” she said.