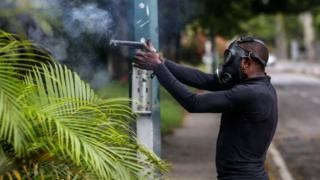 Venezuela’s electoral authorities have dismissed a claim that turnout in Sunday’s controversial vote for a new constituent assembly was inflated.

The firm behind the voting system said turnout was at least one million fewer than the government figure.

But the head of the election council hit back, calling it an “irresponsible claim, with unfounded estimations”.

President Nicolás Maduro has said that the new assembly will be inaugurated on Friday.

The opposition see the assembly as an attempt by Mr Maduro to cling on to power.

They boycotted the election and also held an unofficial referendum in which they said more than seven million Venezuelans voted against the constituent assembly.

Turnout in Sunday’s poll is seen as a key indicator of the level of support the government enjoys.

The government said more than eight million people, or 41.5% of the electorate, had voted.

What are the allegations?

“It is with the deepest regret that we have to report that the turnout numbers on Sunday 30th July for the Constituent Assembly in Venezuela were tampered with,” the boss of Smartmatic, Antonio Mugica, told journalists in London.

He said a full audit was needed to establish the exact number of voters but he said the firm estimated there was a difference of at least one million.

Mr Maduro said the vote was free and fair and that it would not be tainted by “a company with its headquarters in London and its bank accounts in the United States”.

The opposition-controlled National Assembly has approved a request to open a criminal investigation into Smartmatic’s claims.

Despite intense pressure at home and abroad, Mr Maduro is ploughing on with the constituent assembly.

The first deputies for the new body have received their credentials, among them Mr Maduro’s wife and son. Swearing in has already begun and the assembly’s first sitting is due on Thursday.

Mr Maduro says the constituent assembly, which has the power to rewrite the constitution and bypasses the National Assembly, is needed to restore order after months of crisis.

The opposition is calling for fresh demonstrations with a march planned to coincide with the expected installation of the assembly.

Venezuela remains in political and economic turmoil. Tumbling oil prices have hit social programmes hard and scores of people have died protesting against the government.

But despite the unrest the government retains the crucial support of the armed forces.