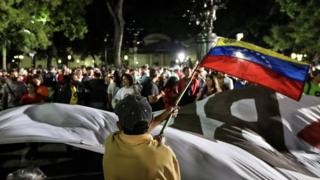 Electoral officials in Venezuela say turnout in the controversial election for a constituent assembly was 41.5%, a figure disputed by the opposition.

The opposition coalition said 88% of voters abstained and it refused to recognise the election.

The opposition also called for more protests on Monday.

Sunday’s election was marred by violence, with widespread protests and at least 10 people killed. President Nicolás Maduro hailed the election.

He called it the “biggest ever vote for the revolution”.

Venezuela’s new constituent assembly will have powers to rewrite the constitution and override the opposition-controlled congress.

Mr Maduro says it is the only way to restore peace after months of protests and political stalemate. But his critics describe it as a power grab.

Despite the violence, Ms Lucena described the election as “a success” and the turnout as “extraordinary”.

Venezuela faces mounting international criticism over the new assembly and on Sunday the US said it was considering fresh sanctions targeting the oil industry there. It has already imposed sanctions on 13 members of Mr Maduro’s government.

The US State Department said it would take swift action against what it called the “architects of authoritarianism”.

US ambassador to the UN, Nikki Haley, dismissed the vote as a “sham election” and a “step towards dictatorship”.

Maduro’s sham election is another step toward dictatorship. We won’t accept an illegit govt. The Venezuelan ppl & democracy will prevail.

Aside from the call for further protests on Monday, the opposition also appealed for a mass demonstration in Caracas on Wednesday when the new assembly is due to convene for the first time.

“We do not recognise this fraudulent process,” said opposition leader Henrique Capriles. He described Sunday’s deaths as a “massacre”.

The BBC’s Will Grant in Caracas says that although President Maduro claims a resounding victory in the election, the challenge will be governing afterwards in Venezuela’s conflicted political environment.

As voting got under way on Sunday, anti-government protesters took to the streets despite a government ban.

At least three people were reported shot dead in the western state of Táchira – two teenagers and a soldier from the national guard.

A youth secretary with the opposition Acción Democrática party was shot dead during a protest in the north-eastern town of Cumaná while a 39-year-old lawyer standing in the election was also reportedly killed in his home in Bolívar state.

In the capital Caracas, an explosion near one demonstration injured several police officers and set a number of their motorcycles on fire.

Why did the election happen?