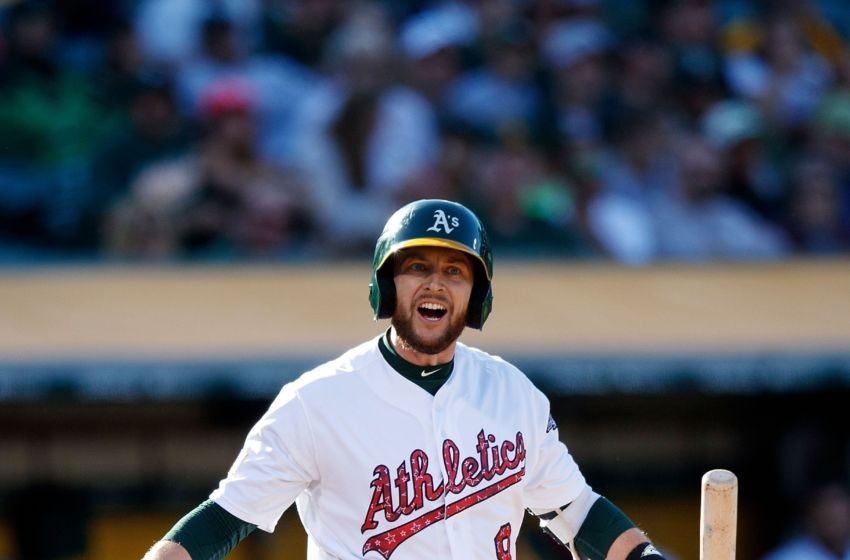 Here we stand, less than a day from the trade deadline and things have been remarkably quiet. Not just for the A’s, who have made one major but not entirely surprising move, but across the league. It appears to be a healthy market for buyers, causing teams to hold on trading their assets.

With Sonny Gray, it makes sense to hold onto him if the market doesn’t bear the proper return for his services. While the idea of a desperate team overpaying at the deadline in an Andrew Miller type package is appealing, it’s not a guarantee. Gray is under control past 2017 meaning the A’s don’t need to rush to send him off.

With Yonder Alonso and Jed Lowrie, the A’s other two obvious assets, it’s a bit different. Both are slated to be free agents and neither are good candidates to be extended. Neither is a safe bet to command the free agent market that would enable the A’s to extend a qualifying offer, so for the A’s to get future value out of them, they need to trade them now.

A note: that’s just the perspective of looking at it in terms of value, without valuing additional wins this season or the fun that either player provides. Both Alonso and Lowrie have been delightful to watch this year, and I wish them success no matter what happens. Saying the A’s need to trade them of course does not account for the countless parts of baseball the matter beyond wins and losses. Please enjoy this Yonder Alonso walk-off video as a token of our appreciation.

From that value standpoint, moving both is the right move. They won’t give the A’s anything in 2018 or beyond from either player, so cashing in now is imperative.

Equally importantly is the development of the A’s youngsters. There are multiple players languishing at AAA Nashville, ready to take over a the big league level behind Lowrie and Alonso.

Joey Wendle is having a solid season and while he’s older and unlikely to provide all that much value, giving him playing time if it’s available isn’t the worst thing in the world. He’s a defensive stud and could provide a potential Sogardian type presence for years to come.

More likely to take over second would be Chad Pinder or Franklin Barreto. The former is probably more likely at this instance, as he’s spent more time at AAA with less to prove. His results haven’t been quite as impressive as we’d like and his bat isn’t a sure thing. It’s got much more upside than Wendle and is more ready than Barreto, and regular at bats for Pinder will give the A’s a lot of clarity into his future. And of course, Barreto is there too. He probably could use a bit more time at AAA, so moving him up isn’t a necessity, but will likely happen sometime in August. Whoever does take over will give us another exciting youngster to watch in August, and would represent a defensive upgrade in terms of range up the middle.

At first, Matt Olson is ready and awaiting full time play in Oakland. He’s having a truly excellent campaign at AAA, and has been decent in his limited big league play. It wouldn’t be surprising to see him succeed with the bat at the big league level given consistent playing time. His defense at first is rumored to be Chapman-esque (on the other side of the diamond) and should be at least as solid as Alonso.

It’s exciting to know the A’s might go from a truly terrible defensive team at the start of the year to a rather excellent in just about one deadline. We’ve seen how fun the Matt Chapman experience is, and how much it can impact a team’s performance: they’ve allowed 4.27 runs per game after his return from the DL, compared to 5.3 runs per gamebefore hand.

Assuming the A’s do move Alonso and Lowrie, they’ll be able to improve their defense now while forming a cohesive unit for the future. Most importantly, they’ll be able to suss out which of their prospects can hack at the big league level, and if they need to target a player at any particular position. One of the most valuable things a non-contending team can do is find out what exactly they have in the minor leagues, and the A’s can only do so if they move the players blocking those burgeoning minor leaguers.

Problem is, the market for both players isn’t exactly expansive. For Alonso, it looks like it’s the Yankees or bust, possibly only if he’s attached to Sonny Gray. The most likely suitors for Lowrie have snatched up alternatives. The buyer’s market at the hands of a sport lacking parity has made for a rumor-less deadline and underwhelming deals for this year’s sellers. The return for options for Lowrie and Alonso are likely to underwhelm.

But even if the return is underwhelming, the smart play is to move both players. Not only for the return, but to clear the way for more youngsters in the A’s continued youth movement.