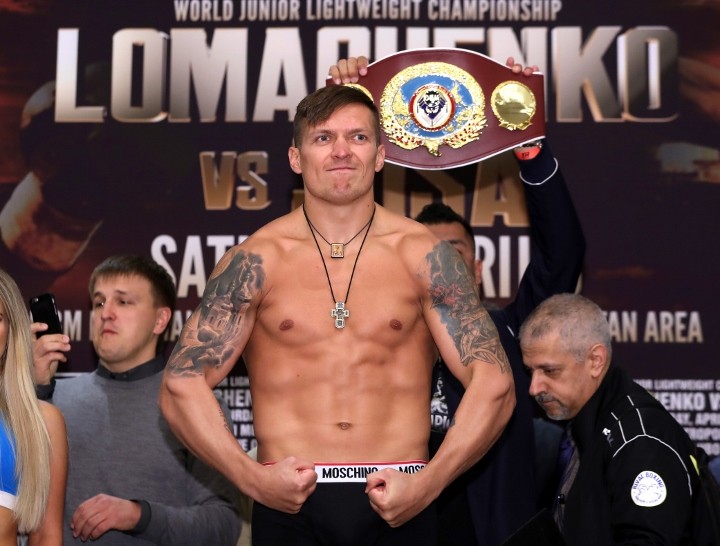 “The first fight of the tournament will be staged in one of the most famous and influential cities in Europe in one of the most important boxing markets,” Comosa AG’s Roberto Dalmiglio said. “Two great champions and the first glimpse of one of the favorites in such renowned venue.”

At the July 8 draft in Monte Carlo for the eight-man, single-elimination tournament, No. 1 seed Usyk (12-0, 10 KOs) picked the unseeded Huck (40-4-1, 27 KOs) as his quarterfinal opponent in a match that pits the new guard of the 200-pound weight class against the old guard.

“I can’t wait for the start of the tournament,” said Usyk, who will be making his third title defense. “I miss the ring and look forward to hearing the opening bell ring again. At the moment I am not thinking of my opponent. I am concentrated on my preparation. I’ve got many things to do in my training camp. If he wishes, he may think about me.”

Usyk, a 30-year-old southpaw from Ukraine, won the 2012 Olympic heavyweight gold medal and then made cruiserweight history in September, when he traveled to Poland and dethroned Krzysztof Glowacki. By winning a cruiserweight world title in only his 10th professional bout, Usyk set the division record for fewest fights needed to win a title, breaking the mark of 12 held by Hall of Famer Evander Holyfield.

Usyk has since defended his title twice in the United States, a ninth-round knockout of Thabiso Mchunu in December and a lopsided unanimous decision against Michael Hunter Jr. on April 8. In Huck he faces a much more formidable opponent.

“I have seen that I am the favorite (to win the tournament),” Usyk said. “I am confident in what I am doing at the moment. Once the first round begins I will start doing my job. I will box with passion and devotion.”

Huck, 32, of Germany, who turned pro in 2004, is one of the biggest names in division history but seen by many as being on his last legs after going 2-2 in his last four fights and engaging in many grueling bouts.

In 2015, Huck tied Johnny Nelson’s record for most defenses in division history at 13 before losing by dramatic 11th-round upset knockout to Glowacki in a fight of the year contender. Huck bounced back with wins against rival Ola Afolabi, in their fourth fight, and Dmytro Kucher but then lost a clear decision challenging Mairis Briedis for his world title on April 1.

Huck will have the hometown advantage and is eager for a chance to get back to the top of the division.

“I am very excited that I am meeting the so-called favorite for the tournament already in the first fight,” Huck said. “This will definitely be a fight that no fan should miss. I have won world titles and defended them many times, but the Muhammad Ali Trophy (that will go to the tournament winner) is unique. I would love to win it.”

Kalle Sauerland, who spent years promoting Huck, knows what he is capable of and, like many, expects Usyk-Huck to produce action.

“I believe that the fans in are in for an electrifying opener to the World Boxing Super Series and eight consecutive weekends of action,” Sauerland said. “I genuinely felt electricity between the pair. I think Huck really wanted Usyk to pick him and the way they faced off on the stage in Monaco (at the draft) was a sign of things to come. I’m not sure the judges will be needed in this one.”

The fight kicks off eight consecutive weeks of tournament action with the four cruiserweight quarterfinals and four quarterfinal bouts in World Boxing Super Series super middleweight tournament. The 16 fighters in the two tournaments will divvy up $50 million in prize money. After the quarterfinals in September and October, the semifinals are supposed to take place in early 2018 with the finals ticketed for May 2018.

An American television deal for both tournaments has not yet been worked out.