Forecasters are warning parts of the UK to brace for gale-force winds of more than 60mph overnight.

The strong westerly winds will be at their height from 9pm on Wednesday, and will continue until about 9am on Thursday.

The Midlands, Mid Wales, North Wales, the North West, Yorkshire and East Anglia are the areas most likely to be affected.

A wet & windy night is in store across some northern and central parts of the UK, with heavy #rain and #gales

A yellow severe weather warning has been issued for #wind

with the potential for disruption to travel and power supplies #weatheraware pic.twitter.com/7kkeQHBLhg 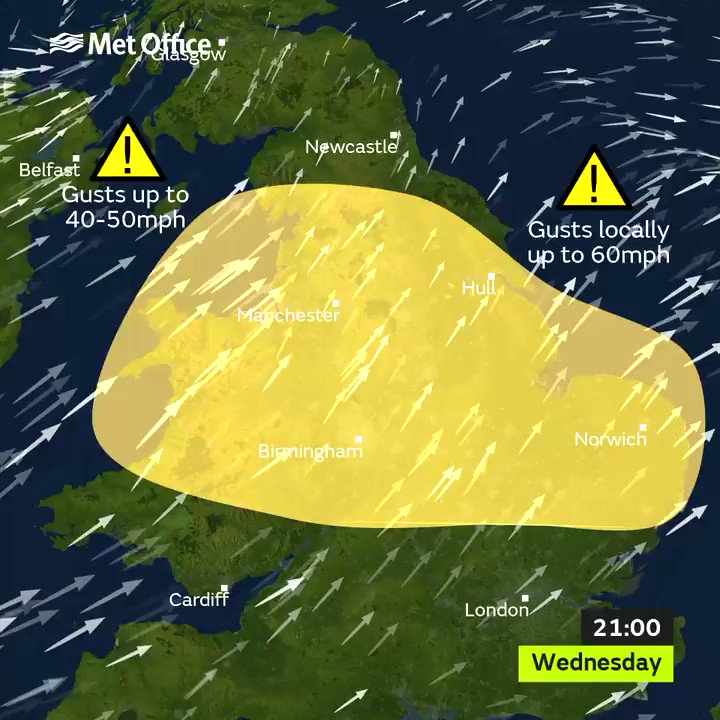 Sky News weather producer Chris England said: “It’ll be wet and windy through many central parts today, with heavy rain and 60mph gusts bringing the risk of some disruption to travel, especially as many trees are still in leaf.

“The wind and rain will spread south tonight, with coastal gales likely around the Channel early tomorrow, but will clear during the morning to leave a mainly fine day.”

While rainy and windy weather in not unusual in the UK in October, this month is expected to be the wettest on record due to the fallout from tropical storms Lee and Maria over the Atlantic.

Another two storms – Brian and Caroline – are due to reach UK shores in mid-October.