UK Home Secretary Amber Rudd stepped down Sunday because she “inadvertently misled” a government committee about deportation quotas for immigrants, she said in a resignation letter obtained by CNN.

The Home Affairs Select Committee questioned Rudd last week over quotas for removal of the Windrush generation, the first large group of Caribbean migrants to arrive in the UK after World War II.
Rudd told the committee she had no knowledge of quotas. However, The Guardian on Sunday published a memo written by Rudd in which she said deportation quotas had been set. 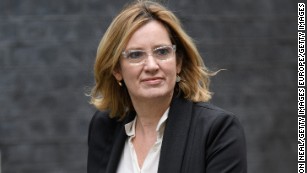 Amber Rudd
“Since appearing before the Select Committee, I have reviewed the advice I was given on this issue and become aware of information provided to my office which makes mention of targets. I should have been aware of this, and I take full responsibility for the fact that I was not,” Rudd said in the letter.
Prime Minister Theresa May accepted Rudd’s resignation, writing: “I was very sorry to receive it, but understand your reasons for doing so.” 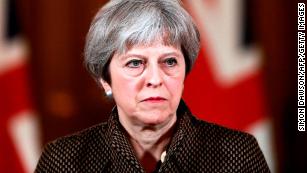 Theresa May
May’s government recently said the Home Office destroyed landing documents for Caribbean immigrants, meaning some of them and their children faced deportation after decades living in Britain because they don’t have the correct paperwork.
May apologized to Caribbean leaders for any “anxiety” caused by the records destruction, which occurred when she was home secretary under the previous administration.
May served as home secretary from 2010 to 2016 under Prime Minister David Cameron.
Rudd also apologized and told the House of Commons the UK would work to ensure citizenship for the Windrush generation. 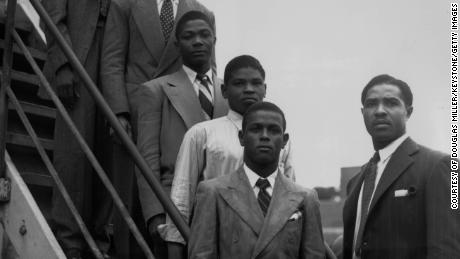 Caribbean immigrants in UK face deportation 02:27
The Windrush Generation came to symbolize the seismic demographic changes that took place in post-war Britain, when hundreds of thousands of people came to the United Kingdom from former British colonies, known as the Commonwealth.
But in recent years, successive British governments have sought to appear tough on illegal immigration, and their descendants are now struggling to prove a citizenship status they previously took for granted.

Rudd’s resignation may further weaken May’s government.
The prime minister doesn’t have a majority in the UK parliament and is struggling with Brexit negotiations.
Blame on Sunday was quickly directed toward May. Tom Watson, the deputy leader of the Labour Party, tweeted: “I see Amber Rudd is carrying the can for the person originally responsible for this scandal – Theresa May.”
Rudd was appointed home secretary in July 2016. She previously served in the government as secretary of state for energy and climate change, parliamentary under secretary of state for climate change and assistant government whip.
Rudd has been a member of Parliament since 2010, though she won her constituency in Hastings and Rye by only a few hundred votes in 2017.
May shook up her cabinet last January, but Rudd and other major figures kept their jobs.
Share
Facebook
Twitter
WhatsApp
Pinterest
Linkedin
ReddIt
Email
Print
Tumblr
Telegram
Mix
VK
Digg
LINE
Viber
Naver
Previous articleCaravan asylum-seekers heading toward showdown as US officials say border crossing is full
Next articleAvengers: Infinity War estimated to break global opening weekend record