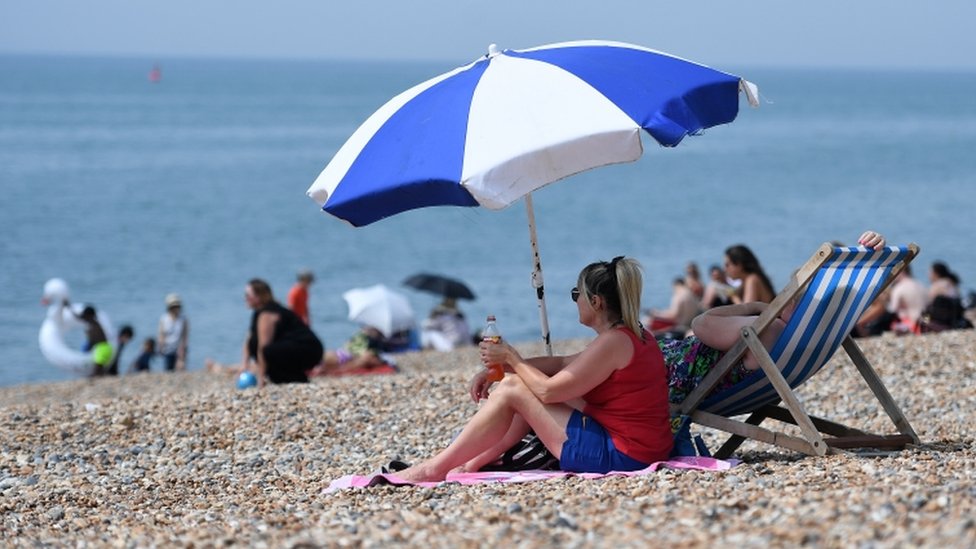 It is officially the hottest day of the year so far in the UK with temperatures soaring to 35C in west London.

A temperature of 35C (95F) was recorded at Heathrow Airport and it is expected to rise further.

The UK’s all-time temperature record could be broken by Friday as the hot and dry summer continues.

Temperatures of 37C (99F) have been forecast in southern, eastern and central England for Friday.

But much of England could also experience thunderstorms and hail showers, bringing the risk of flash flooding.

Some places could see as much as 30mm of rainfall in an hour and 60mm in three hours.

The high temperatures have been blamed for delays to cross-Channel rail services of up to five hours.

Eurotunnel said air conditioning problems meant some carriages could not be used, which led to the delays.

It added that the queues were on the UK side because of the sheer number of France-bound passengers at the start of the summer getaway.

Meanwhile, London’s fire chief has called for barbecue bans to be imposed in the capital’s parks after a record-breaking number of grass fires.

London Fire Brigade’s Commissioner Dany Cotton urged all borough councils to impose a temporary ban in the “tinder dry capital” as it was “only a matter of time” before someone was seriously hurt.

There have already been 43 large grass fires in London so far this year, compared to seven in the whole of 2017.

A high pollution warning was issued for London on Thursday, due to a mix of toxic air, extreme highs, emissions from the continent and a lack of cloud.

Young people, the elderly and those with lung or heart problems were advised to reduce strenuous exercise and physical exertion.

Hospitals, too, have been affected by the heat.

One nurse was admitted to A&E with dehydration after working three 12-hours shifts in a row during the heatwave.

Kim Sun-Lee, national officer at the RCN, said: “It is vital employers adapt working practices to the heat – both patients and nurses must have easy access to water, and all healthcare staff should be able to take regular breaks, preferably somewhere cool.”