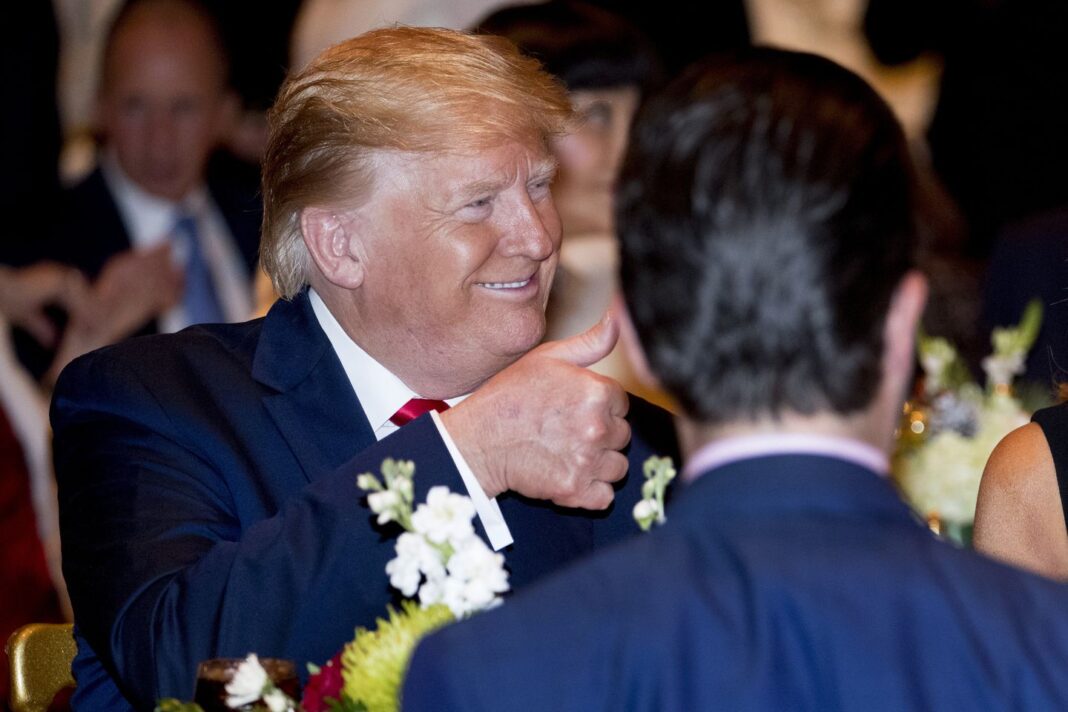 The Dow Jones industrial average has gained about 45 percent since Trump was sworn in nearly three years ago. The Dow was up about 53 percent at this point in Obama’s presidency and a whopping 57 percent in Clinton’s early years in office. How much credit presidents deserve for market gains — or losses — remains a big debate, but Trump points to the stock market frequently as a barometer of how he’s doing as president.

Trump’s claim that stocks are “far outpacing” what occurred under prior presidents is based off a CNBC article that uses data from Bespoke Investment Group showing that stock market performance under Trump is better than the typical gains for a president’s initial three years in office. Bespoke did not claim that Trump is presiding over the best gains of all time.

Still, the rally under Trump now outpaces Republican presidents from the recent past, including Ronald Reagan, at this point in their presidencies. And Trump might be able to claim an especially big milestone for 2019.

This could be the best year for stocks since 1997. Most investors watch the S&P 500 index, which tracks 500 of America’s largest publicly traded companies. It is up 29.3 percent so far this year.

The best calendar year for stocks under Obama was 2013, when the S&P 500 finished the year up 29.6 percent as the economy was rebounding from the Great Recession. If this year tops that mark, it would be the best for stocks since the late 1990s.

Roughly half of Americans have money in the stock market — mainly through pensions or 401(k) retirement funds.

If the S&P 500 ends the year up 30 percent, it would be only the fifth time since the 1950s that the index has crossed that 30 percent threshold. The stock market is open Monday and Tuesday, the last chance for an end-of-year rally.

While Trump likes to take credit for the stock market’s great 2019, he rarely mentions last year when U.S. stocks posted a negative annual return. Stocks tanked last December after Trump proclaimed he was “tariff man,” a signal his trade war would ramp up more, and the Federal Reserve indicated it would likely hike interest rates further.

“We had a bear market at the end of 2018, so stocks were beaten down at the end of last year. We had a low starting point, so the 2019 market increase was magnified,” said Gus Faucher, chief economist at PNC Financial Services Group.

Many Wall Street analysts say Trump’s tax cuts and deregulatory push helped fuel the stock market rise in Trump’s first year in office, but they credit much of this year’s gains to the U-turn at the Fed.

Trump has repeatedly lashed out at the Fed, calling its leaders “boneheads” for keeping interest rates too high. This year, the Fed cut interest rates three times and Fed Chair Powell promised he would do whatever it takes to keep the economy humming.

Investors cheered as the Fed shifted gears and stimulated the economy. Lower interest rates make it cheaper to borrow money and encourage people to invest in stocks since they earn so little interest in savings accounts or on bonds.

“This year was all about the fact that the Fed cut rates,” said Bran McMillan, chief investment officer at the Commonwealth Financial Network. “It’s not so much that companies are doing great. It’s that investors looked at interest rates and realized stocks were going to be the place to be and they were willing to pay up for that.”

Some are warning that the stock market is now overvalued and exhibiting similar signs to the dot-com boom, but McMillian notes that a recession and market downturn tend to go hand-in-hand. Recession fears have largely abated in recent months as hiring and consumer spending have remained strong.

For now, cautious optimism abounds on Wall Street. Most economists predict another year of solid growth around 2 percent and stock market gains, albeit far more modest ones than this year’s. A scenario like that bodes well for Trump’s reelection, according to historical models.