Trump’s latest shot at the press corps: ‘Take away credentials?’ 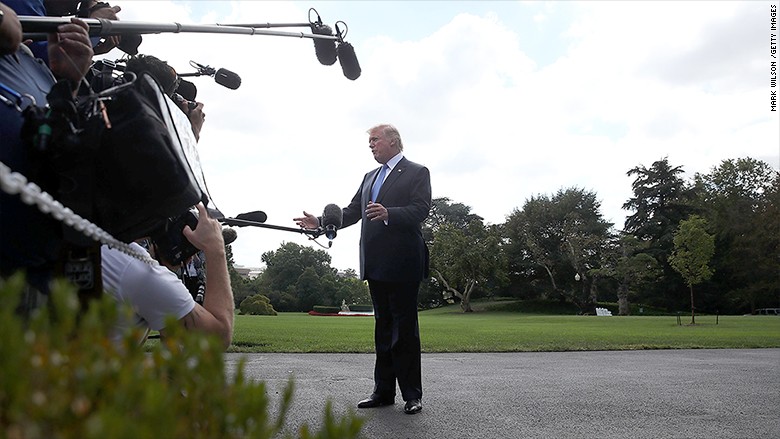 President Trump has mused privately during his nearly 16 months in office about revoking reporters’ press credentials, according to multiple people familiar with his comments.

On Wednesday, he brought it up publicly, tweeting “take away credentials?” as a question.

If he intended to provoke a reaction, he succeeded. Some journalists expressed outrage at the idea. Others dismissed it as typical Trump bloviating.

The White House Correspondents Association, which represents the press corps, expressed concern about the tweet.

“Some may excuse the president’s inflammatory rhetoric about the media, but just because the president does not like news coverage does not make it fake,” the association’s president, Margaret Talev, said. “A free press must be able to report on the good, the bad, the momentous and the mundane, without fear or favor. And a president preventing a free and independent press from covering the workings of our republic would be an unconscionable assault on the First Amendment.”

The White House has historically been permissive about press passes, erring on the side of greater access, even for obscure, partisan or fringe outlets. There are no indications that Trump is actually taking steps to change that.

But Wednesday’s comment showed his continued hostility toward the journalists who cover him.

“These authoritarian impulses of yours are anti-American,” former Office of Government Ethics director Walter Shaub, now a CNN contributor, tweeted in response.

Trump, apparently in venting mode, linked the “credentials” question to a complaint that network news coverage of his presidency is “negative (Fake).”

“He has a lack of understanding of how news coverage actually works, and unfortunately so do a lot of his supporters,” Maggie Haberman of The New York Times tweeted.

Trump’s question faced some criticism from one of his most powerful allies in conservative media. Matt Drudge, the founder of The Drudge Report, tweeted Wednesday morning, “I fear the future result of Trump’s crusade on ‘fake news’ will be licensing of all reporters.”

“The mop up on this issue is going to be excruciating,” added Drudge, who stays in regular contact with the White House, but who has fired a number of warning shots at the administration.

In private, Trump sometimes grumbles about the press and grasps for possible penalties, like revoking credentials, according to the people familiar with his comments.

At times, the people said, Trump names individual reporters whose coverage he doesn’t like and feels is unfair to him, but more often he talks about blocking specific television networks or other outlets.

He has a history of doing this. During the presidential race, Trump’s campaign denied credentials to several news outlets, including The Washington Post, Univision, and Politico.

But he told CNN in a June 2016 interview that if elected, he would not kick reporters out of the White House. “When I’m representing the United States, I wouldn’t do that,” he said.

After the election, Trump aides like Steve Bannon continued to push proposals that would have inhibited the work of the White House press corps. But none of those ideas — like moving press briefings out of the West Wing — came to pass. A ban on television coverage of the briefings only lasted a few weeks.

Despite the president’s constant complaints about the media, journalists have given the administration generally high marks for access around the White House.

During Trump’s cabinet meeting on Wednesday morning, when the press pool was brought in for a photo op and a few questions, Yahoo’s Hunter Walker asked, “Will you ban press from the White House?” Trump did not answer.

But at the same cabinet meeting, he talked about the press covering the Americans who were released from North Korea on Wednesday. The three men are expected to arrive back in the United States early Thursday morning.

“It’ll be quite a scene,” Trump said.