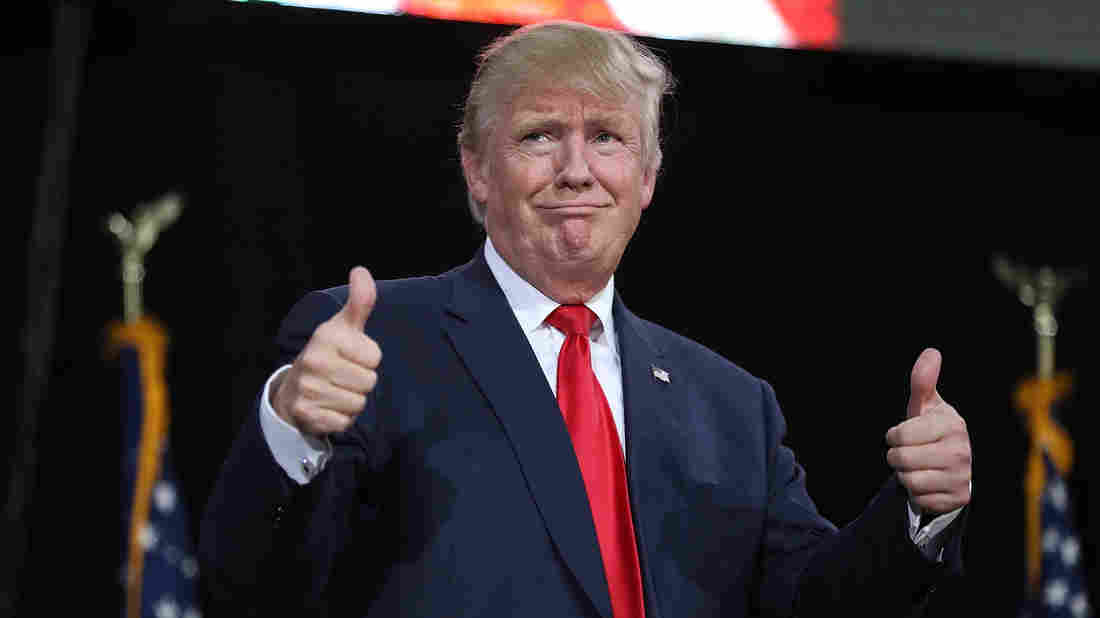 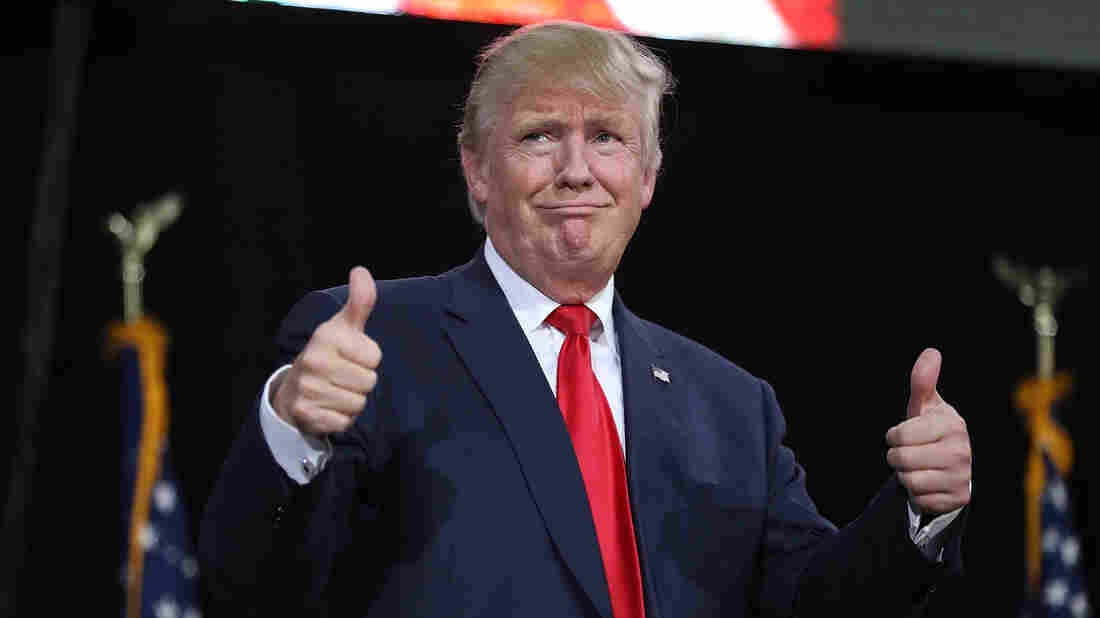 Donald Trump, at a Florida campaign rally in October, hasn’t gotten a thumbs-up from the vast majority of Democrats, a reflection of the partisan divide in modern politics. Joe Raedle/Getty Images hide caption

Donald Trump, at a Florida campaign rally in October, hasn’t gotten a thumbs-up from the vast majority of Democrats, a reflection of the partisan divide in modern politics.

Look at his ratings on polling aggregators like RealClearPolitics or FiveThirtyEight, and the drop sure looks dramatic.

While his approval rating has fallen and the gap between approval and disapproval has widened considerably, it has not shifted in any extraordinary sense. This is, in part, because of how those charts are scaled, as well as the fact that they show the widening gap between approval and disapproval (and that he started lower than past presidents — there is only so low you can go).

To be clear, this isn’t to say that those are misleading. But it is to say that with more historical context, Trump’s sliding approval rating really hasn’t slid that much.

By RealClearPolitics’ average, Trump’s approval rating has fallen off by about 4 points since the first day of his term. FiveThirtyEight has it a bit bigger, at around 6 points. We wanted to know how big this type of decline compared with that of other presidents. Gallup has been tracking presidential approval ratings since the Truman administration, so we used its data to figure this out.

Trump’s disapproval rating has also climbed, by 9 points in Gallup’s poll. Once again, this is far smaller than the increase that most other presidents have sustained in their first four months.

As a side note here, you might notice that Trump’s disapproval increase is larger than the decline in his approval rating, which may seem odd, but that is a common trend among presidents.

When pollsters have asked in late January about approval of new presidents, people often answer that they don’t know how they feel or have no opinion; they simply haven’t known that president long enough. So once they do decide, approval and disapproval ratings both tend to climb. (For Trump, check out the Jan. 31 through Feb. 3 period, which shows a sharp climb in both.) During that sorting out, as it turns out, disapproval often climbs by more than approval.

“[Approval] is a pretty labile measure in general,” said Frank Newport, editor-in-chief at Gallup. But for Trump, he said, it just “isn’t changing much.”

He added, “When I talk about it, I generally say his approval hasn’t changed that much on a relative basis.”

As with so many other phenomena in politics these days, polarization appears to be another driving factor here.

Democrats had little love for Trump to begin with, and nothing thus far has shaken Republicans’ loyalty to him. Given his record-low approval ratings, Trump would have to lose ground among independents and Republicans in order to dip much more.

For proof, a look at the smallest gap between Republicans’ and Democrats’ views of the past dozen presidents during their first (roughly) four months in office.

Granted, there are differences between Gallup’s data in the 1960s and today — that is, it took far fewer measurements of approval than it does now, so the data doesn’t have the day-to-day ups and downs that today might make any given gap slightly smaller or bigger.

But the trend is what is important — approval gaps for new presidents have widened in recent years, and for Trump, the gap is remarkably wide.

“It’s more tribal than anything else,” said Patrick Murray, founding director of the Monmouth University Polling Institute. “The two-party system has moved from this idea that these were two admirable foes who just have different approaches to governance to seeing the other party as an existential threat.”

He points to the relative movement (or lack thereof) of approval by party as proof, noting that, for example, Nixon’s job approval fell to the mid-20s by the end of his presidency, when he was embroiled in the Watergate scandal.

Should the Russia investigation become much more damaging to the White House or should another scandal arise, Murray said, “there’s the possibility that that won’t happen to Donald Trump, because people are so viscerally tied to their party identification today.”