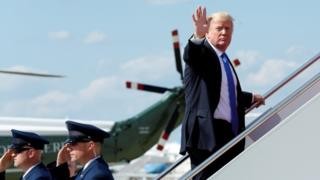 Like many denizens of Washington DC, US President Donald Trump is escaping the heat that smothers the nation’s capital in August.

But his respite is anything but brief. The president will spend 17 days at his private golf club in Bedminster, New Jersey, for what the White House bills as a “working vacation”.

For someone who brands himself as an indefatigable businessman, the nearly three-week holiday has raised a few eyebrows.

In his 2004 book, Think Like a Billionaire, Mr Trump offered the advice: “Don’t take vacations. What’s the point? If you’re not enjoying your work, you’re in the wrong job.”

However, the president’s departure is also part of a planned renovation. The entire West Wing staff is required to vacate the premises in August while the building’s 27-year-old heating, air conditioning and ventilation system is replaced, according to White House spokeswoman Lindsay Walters.

Other maintenance includes repairing steps on the side of the executive mansion facing the National Mall as well as painting, replacing carpets and curtains, and fixing, ahem, water leaks in the press office.

Why are people upset?

But as critics point out, Mr Trump’s 17-day holiday is nearly twice as long as the one Mr Obama took in August during his first year.

If weekends are included, that means he’s taking off 13 days, compared with Mr Obama’s eight.

“I’m going to be working for you, I’m not going to have time to go play golf,” Mr Trump told a Virginia crowd during the campaign, in a gibe at Mr Obama.

Before Mr Obama’s August 2009 holiday in Martha’s Vineyard, he took two other vacations that were said to entail work, including a weekend trip to Arizona and Colorado and a four-day trip to the family’s home in Chicago for Valentine’s Day.

By comparison, Mr Trump has taken 11 such “working” vacations before this month to his properties in Palm Beach, Florida, and New Jersey. He also spent a weekend in June at the government-owned presidential retreat, Camp David, Maryland.

Mr Obama was also labelled a hypocrite after writing in his 2008 book The Audacity of Hope that no president should take vacations.

Mr Trump told 60 Minutes in November: “There’s just so much to be done, so I don’t think we’ll be very big on vacations, no.”

Last month, he told Republican senators to cancel their August recess until lawmakers pushed through a plan to repeal and replace the US health law, known as Obamacare.

The bill failed to pass the Senate and Congress appeared to ignore his advice. The Senate adjourned for summer recess on Friday and will not return until 5 September.

Newsweek’s cover on Thursday depicted the president lounging in a recliner, calling him a “Lazy Boy”.

“Imagine how bad he’d feel if he did any work,” the magazine sniped.

The local airport has been shut down until 20 August, grounding 110 private planes and 60 flight school students.

The US Secret Service also said during his stay it would use an unmanned drone, with optical and infrared cameras. Roads may be closed to clear the way for the president’s motorcade.

Is it normal for presidents to go on holiday?

The tradition of presidential vacations extends as far back as George Washington, who retreated to his Mount Vernon plantation on the Potomac River.

But the custom of controversy over presidential absences from the White House is nearly just as old.

When the capital was still Philadelphia in 1797, President John Adams was criticised for spending several months at his home in Massachusetts, where his sick wife Abigail stayed, as tensions escalated with France.

President Harry Truman preferred the palm trees of Key West, Florida, while Ronald Reagan travelled to his California ranch to ride horses, build fences and cut brush, according to Lawrence Knutson, a historian for the White House Historical Association.

He later came under scrutiny for funnelling millions in public funds for security and improvements at both residences, which included a $400,000 (£306,000) floating helicopter pad in Biscayne Bay.

Why do Americans skip holiday?

The US is the only advanced nation that does not mandate paid leave, which is why the American work ethic seems a bit strange to the rest of the world.

According to the Center for Economic and Policy Research, workers in most European countries are legally entitled to 20 days of holiday or more each year.

Australia and New Zealand also require employers to allow at least 20 vacation days annually, French employees get as many as 30 days off and Swedes enjoy five weeks of holiday.

In contrast, most Americans get only two weeks off, but some workers let that time off lapse out of fear of losing their jobs.

In 2016, 54% of employees ended the year with unused time off, surrendering 662 million vacation days, according to a US Travel Association’s Project Time Off study.

In fact, nearly a third of workers are not granted paid sick leave and more than a quarter do not have any personal time off at all, according to the Bureau of Labor Statistics. States like California and New York have remedied that by requiring employers to offer paid sick leave.

The nation’s workaholic culture also plays a role in the country’s dismal figures on annual leave. Americans are famously addicted to work, which means taking a vacation may not always mean unplugging from work emails and social media.

Two in three US employees (66%) said they continue to work while on holiday last year, according to a report by jobs site Glassdoor.

It remains to be seen how much of Mr Trump’s working vacation will be spent running the country instead of a golf cart.