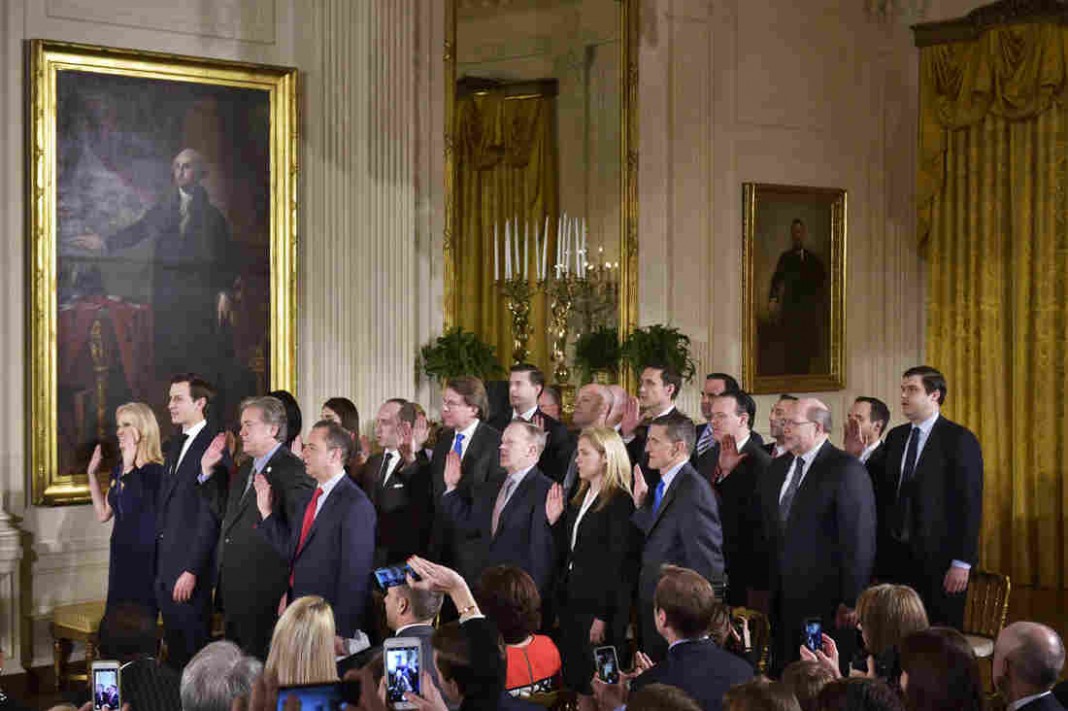 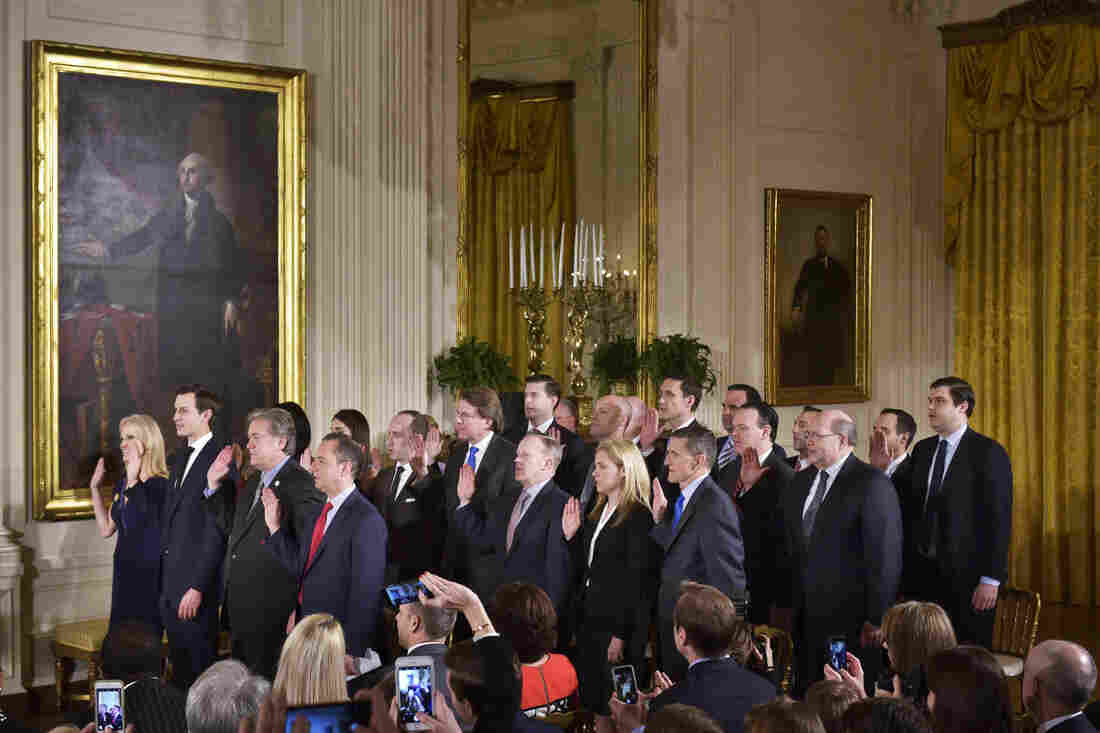 The White House senior staff is sworn in at the White House in January. Twenty-two members of the staff will make $179,700 this year and 18 more earn $165,000 a year, making the Trump administration’s payroll top-heavy compared to the Obama administration. Mandel Ngan/AFP/Getty Images hide caption

The White House senior staff is sworn in at the White House in January. Twenty-two members of the staff will make $179,700 this year and 18 more earn $165,000 a year, making the Trump administration’s payroll top-heavy compared to the Obama administration.

There are currently 377 White House office staff in the Trump administration, about a hundred fewer than were on the Obama payroll in 2016. And, by way of comparison, coverage of Obama’s 2009 report listed 487 staffers in his first year.

This staff size may be an indication that Trump prefers a lean headquarters staff at the White House as he did with his campaign. But David Cohen, a professor at the University of Akron whose specialty includes White House staffing, says this is a sign the Trump administration is “having a hard time attracting talent to the staff.”

With a scaled-down staff, Cohen said, “it can run. It’s running right now, but it’s not running particularly well.”

With fewer people to carry the load, Cohen added, already difficult and stressful jobs get harder.

“You have new levels of stress that few White House staff have ever had to deal with,” said Cohen.

Press secretary Sean Spicer said in an email that the lean staffing was the result of the new administration “trying to give taxpayers the best return” — something the White House is endeavoring to do “throughout all government.” Spicer also noted “there is a huge demand for jobs” in the administration.

Trump’s total payroll adds up to $35,766,744. Helping to contain costs are the three advisers taking no pay at all: the president’s daughter, Ivanka Trump; her husband, Jared Kushner; and Reed Cordish, who works on intergovernmental and technology initiatives with Kushner. Gary Cohn who came to the White House from a top job at Goldman Sachs is taking a salary of just $30,000 a year. (That amount, Spicer told NPR, is the minimum that qualifies for benefits.)

As for the people at the top of the pay scale making $179,700, there are several names that will look familiar:

One person makes more: Mark House, who is on loan from the FAA working on a short-term project, is set to make $187,100 this year.

Sarah Sanders, the principal deputy press secretary who recently has been conducting most of the White House press briefings, earns $165,000 a year as does Keith Schiller, the director of Oval Office operations who was Trump’s longtime bodyguard, and Peter Navarro, director of the president’s National Trade Council.

The median Trump White House office salary is $89,000 compared to a median salary the final year of the Obama administration of $73,051.