Trump to visit Windsor and Chequers on UK trip 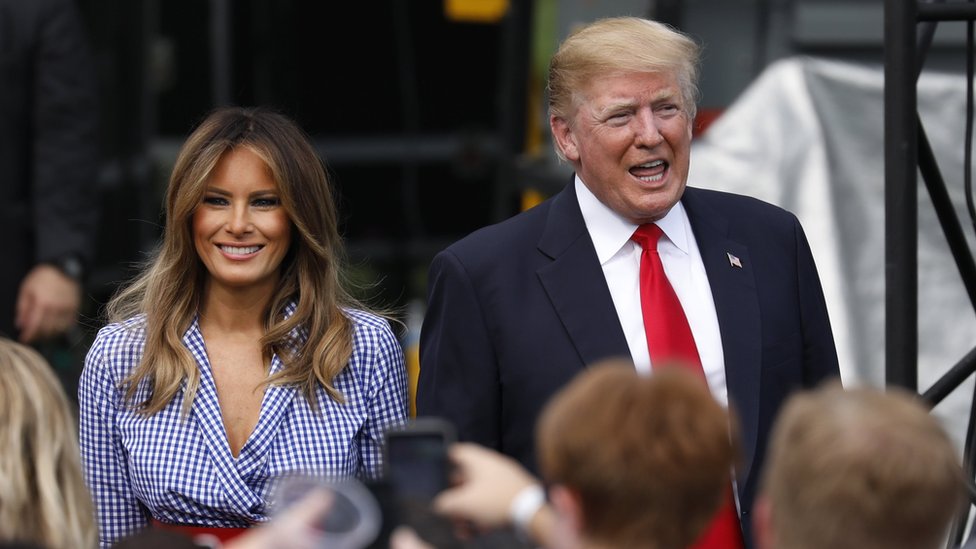 Donald Trump will meet the Queen at Windsor and hold talks with the prime minister at Chequers on his two-day visit to the UK next week.

The itinerary for Thursday and Friday confirms the US president will stay at the US Ambassador’s House in Regent’s Park overnight.

But he will spend much of his time outside London at formal events.

Protests in the capital will go ahead as planned, organisers have said, with others set to demonstrate in Scotland.

BBC diplomatic correspondent James Robbins said it would be “the most controversial visit ever made by an American president to Britain”.

Despite some pomp and ceremony, it will be “far from the original state visit promised to President Trump” and remains what is deemed a working trip, Robbins added.

Robbins said it was also “really noticeable that he will barely spend any time in London” – perhaps to avoid the protests.

But US ambassador to the UK, Woody Johnson, said there was no deliberate plan to keep Mr Trump out of the capital or away from protests, and he was “focused on his objectives”.

He added that it was a “short trip, packed with things he has to do”, but that President Trump “will be spending a lot of time in central London”.

Groups organising protests on Friday have vowed to “be heard” whether he is in the capital or not.

☕ with the Queen
?️‍♂️ in Scotland
? and ? at Bleinham where #Churchill was born

We will be heard.

President Trump will fly in to the UK on Thursday afternoon with First Lady Melania Trump, following a Nato summit in Brussels.

The couple will attend a black-tie dinner on Thursday hosted by Theresa May at Blenheim Palace in Oxfordshire – the birthplace of Sir Winston Churchill.

The president will be greeted with a military ceremony in the Great Court, with the bands of the Scots, Irish and Welsh Guards playing the Liberty Fanfare, Amazing Grace and the National Emblem.

Invited guests, including a number of business leaders, will eat dinner to the sounds of the Countess of Wessex’s Orchestra, which will play a “series of classic British and American hits”, according to Mrs May’s deputy spokeswoman.

Mr Trump, whose mother was Scottish, will then be piped out at the end by the Royal Regiment of Scotland.

After spending the night at Winfield House in London, hosted by his ambassador Mr Johnson, the president will join the prime minister to watch a UK military exercise, before the pair travel to Chequers – the PM’s country residence in Buckinghamshire – for bilateral talks.

The president and first lady will then travel to Windsor to meet the Queen on Friday afternoon.

On the final leg of the tour, the couple will fly to Scotland, where they plan to spend the weekend.

BBC diplomatic correspondent Robbins said while the government realises it is a controversial trip, President Trump is “fully entitled” to be welcomed into the UK in this way.

The government also stressed that previous presidents have met prime ministers at Chequers rather than at No 10, including Richard Nixon and both the Bushes.

US ambassador Mr Johnson said the “special relationship” between the UK and the US was “as strong as ever”, and that Mr Trump knows the UK “better than any other modern president”.

Mrs May announced President Trump would be coming for a state visit to the UK in January 2017 after she became the first foreign leader to meet with him in Washington following his inauguration.

But after a lot of backlash from MPs and more than one million people signing a petition against the trip, a date has still not been set for the state visit.

Thousands are expected to protest in London on Thursday and Friday against the president’s working visit.

Police forces from across the country have been asked to send officers to assist the Metropolitan Police, including 400 from the West Midlands force.

London Mayor Sadiq Khan has granted permission for a giant inflatable figure depicting Mr Trump as a baby to fly over Westminster for two hours on the second day of the president’s visit.

Daniel Jones, part of the group that organised the blow-up caricature, said he hoped Mr Trump would take note of their efforts online, even if he could not see it in person.

He added that, “like it or not”, the government would not be able to “smuggle” the president around the country “without him seeing anything”.

Others are holding marches through the city and in Scotland – where President Trump owns golf courses.