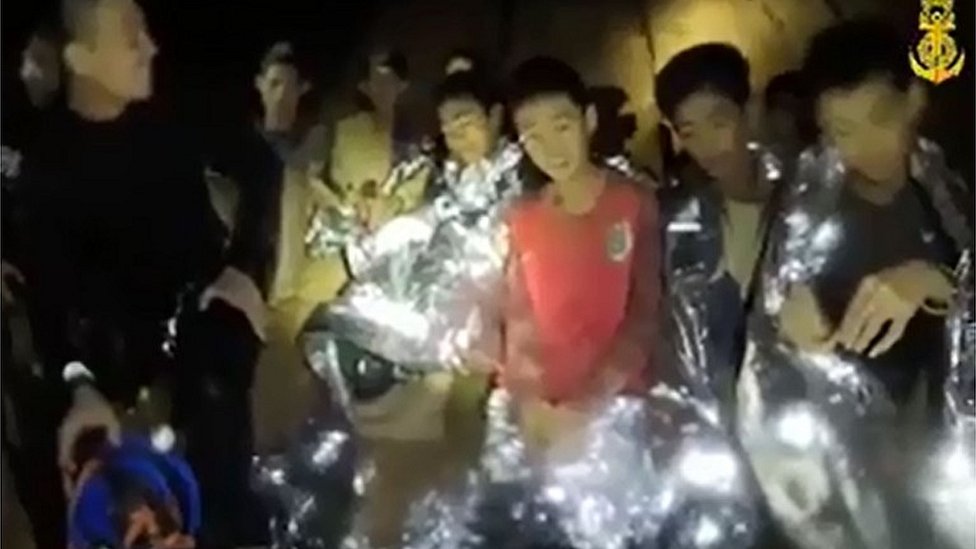 On Friday morning, the army of volunteers at the mouth of the Tham Luang cave in Thailand had the worst news so far – a former Thai navy diver, Saman Gunan, had died.

He had been delivering air tanks to the 12 young boys and their football coach trapped underground.

The joy and elation that came after the group were found alive earlier this week has faded away.

Now the mood at the rescue site is sombre, with diving volunteers saying they are saddened by Gunan’s death.

For the local community, and those who watched the boys grow up, the plight of the group has been deeply upsetting.

“You never imagine someone you know could get trapped in a cave,” says shopkeeper Patcharee Khumngen.

One of the boys, known as most Thai children are by a nickname – his was Note – rode a bike to her shop to buy snacks when he was eight years old.

“He’s a good boy, very friendly, and always liked to joke around,” she told the BBC.

“Now that he’s in his teens he looks quite handsome,” she added, with the fondness of an auntie. “I’ve known his parents since he was a little boy.”

The story has hit the community particularly hard because the cave is just 4km (2.5 miles) away from the local neighbourhood, Maesai, where some of the boys went to school. It’s a spot popular with day trips and visited by local children.

When the news first emerged two weeks ago that the local boys – all members of the same football team, the Wild Boars – and their coach were lost in the vast cave, the village rallied together, donating food and money.

Patcharee prepared sticky rice and deep fried pork – two popular local dishes. In Thai culture, this is a common way of showing care for someone.

He taught one of the boys, nicknamed Mark, back when he was in primary school.

He was a “cheerful, energetic and friendly” student, and they had stayed in touch as he began secondary school, he told the BBC.

Mark loves playing volleyball and, along with another one of the boys, is a member of a local team that came second in a tournament featuring teams from across northern Thailand.

Bunjob said he was particularly worried about Mark, “one of the youngest in the cave”.

At school, once they learned that their classmate was missing, students asked Bunjob to turn on the TV so they could follow the news – as they are not allowed to use phones in class.

“For a whole week, some students were in class while others were following the news on TV,” he says.

Meanwhile, the school came together, donating money to help the parents of the missing boys with rent and living expenses, as many had stopped work to wait at the cave and follow news of their sons.

The plight of the boys appears to have united the community.

“Every house here has been talking about the news of the boys,” says Koywilai Promwijit, who works in a local salon.

“The village has donated hundreds of packages of food.”

She and her sister helped prepare fried pork, chicken, sticky rice and chilli paste, eating less during some of their own meals so they could help.

Koywilai’s face lights up when she recalls the moment she learned the boys were still alive late last Sunday.

“I was about to go to bed when I heard the news – and then I couldn’t sleep.”

The site of the rescue operations in Tham Luang Forest Park, near the entrance of the cave, is buzzing with activity.

The first thing you see as you get near is a steady stream of water.

The efforts to save the boys have been described as a “race against the water” – and engineers have been working around the clock, pumping out millions of gallons of water from the cave.

Hundreds of volunteers and journalists have been drawn to the small rural district in Chiang Rai province.

Given the huge numbers of people crowded into a small country park area, it is surprising how well organised and orderly the public areas are.

The site is divided into several zones – restricted areas are where the Thai Navy Seals, other military personnel and civilian rescuers are based.

The public areas include first-aid tents with medics and mental health first aiders, registration points for volunteers, a media zone, and several food stalls where workers from the Thai royal kitchen have been preparing food for volunteers.

The relatives of the boys are also in the public areas – but their tents are guarded to ensure their privacy.

There is a friendly mood among the volunteers – and a keen sense from everyone that they would like to help however they can. At one point, some volunteers offered massages to those at the site. Others distributed bottles of water and ice lollies to journalists.

There is even a system to keep the toilets clean. Everyone is required to step into a basin of water, to wash the mud off their boots, before entering.

Varee Srichai, a farmer in Chiang Mai, was one of the volunteers washing down the area.

She takes pride in her role in the rescue operations, and told me: “I plan to stay here until the boys are rescued.”

Sam Chareanphol, a village police assistant from Maesai district, headed to the cave on the second day after the boys went missing, and has been shuttling volunteers, journalists and rescuers up and down the hill on his motorcycle.

Saran Churat, a local public servant, said he decided to volunteer because “I consider the boys in the caves as my brothers”.

He added: “As you can see, everyone is ready to gather here and give a hand.”

Rafael Aloush and his son Shlomi travelled up from Udon Thani province.

Rafael, who is Israeli, has been cave diving before and went into Tham Luang cave 25 years ago, although he did not travel as deep as the boys.

“I’ve seen the mothers of the kids on TV and it just breaks my heart. I have to do something about it,” he said.

He is volunteering as a diver and translator, while Shlomi, who is studying business management in Bangkok, also hopes to help with translating.

‘No-one really knew what to do’

The early days of the rescue operations were particularly chaotic, as teams struggled to find the right equipment and divers with cave-diving experience.

Local Max Yuttapong Kumsamut drove to the site overnight when he saw the difficulties rescuers were facing.

He’d seen photos of the operation, and could tell that the water pump was too small for the rescue operations.

“I have experience in mining and underground water… so I wanted to help however I could,” he told the BBC.

“At the time when the incident happened, no-one really had any idea what to do.

“Everything had happened so quickly [and] this had never happened in Thailand before. Officials did whatever they could, they brought together equipment, even though it’s not the right equipment – small water pumps, long pipes, short pipes, agricultural piping, knives, shovels – with limited time and planning.”

Because of his experience in installing pumps, Max helped examine the set-up inside the cave, radioing a team outside with what parts and fittings needed to be ordered.

He has stayed on at the site to help with translation work and transporting goods.

Further up the hill leading to the cave, there are Navy Seals and other rescue divers – and a regular stream of soldiers carrying supplies to and from the cave. A rescue base has been set up far inside.

The boys are safe for now, perched on a tall ledge in the cave, surrounded by water.

Video footage from earlier this week shows the boys looking thin and tired, but in good spirits. Many of them were wearing football shirts.

But rescuers still need to find a way to bring them out. The route is a long and windy path with narrow openings that is fully submerged in water in places.

It’s an extremely difficult operation. The cave is dark, and the boys are several kilometres deep inside. They don’t know how to swim – and some parts of the cave are too narrow to wear scuba tanks.

It’s a perilous journey, as diver Kunan’s death illustrates only too well.

He fell unconscious as he was making the difficult five-hour journey back after taking air tanks into the cave.

He was reportedly 38, and fit and well. He was an avid runner and cyclist – and was once a member of Thailand’s national triathlon team. He was popular within the trail-running community in Thailand.

Thai Seal commander Rear Adm Arpakorn Yookongkaew has vowed that “we will not let the sacrifice of our friend go to waste”.

Officials say their priority is now to get a pipe carrying oxygen into the boys’ cave, as the air quality is deteriorating.

Rescuers have also been trying to set up cables leading to the cave – including a communications line so they can speak to their parents, and a line providing more air.

But the cave is long, with too many twists and turns – and they have been unable to connect the cables to them so far.

While rescue efforts have been helped by mostly dry weather for the past few days, water levels could rise again once the monsoon rains start.

Unless the water levels drop, or the boys learn to dive – a difficult task even for adults in these circumstances – they could be there for months.

If and when the boys and their coach are safely rescued, they’ll face an immense amount of media attention.

The local area has also become famous – and Thai tourism officials have said they plan to promote the cave as a tourist attraction.

For locals, the incident is primarily an important reminder about safety.

After this, “everyone will know you are not supposed to go in the cave during the rainy season”, says Koywilai.

Meanwhile, Bunjob hopes that Mark will soon be able to share his experiences with the classmates waiting desperately for news.

“I wish they could come out soon,” he says.