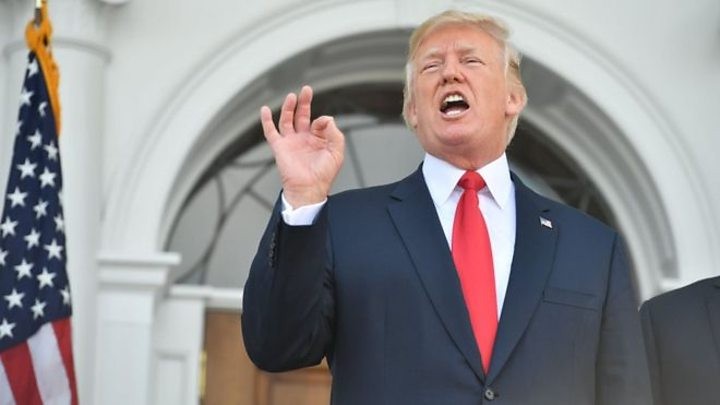 President Donald Trump has warned North Korea it should be “very, very nervous” if it does anything to the US.

He said the regime would be in trouble “like few nations have ever been” if they do not “get their act together”.

His comments came after Pyongyang announced it had a plan to fire four missiles near the US territory of Guam.

Tensions between the two countries have escalated in recent weeks after North Korea tested two intercontinental ballistic missiles in July.

The UN recently approved further economic sanctions against Pyongyang as a result of its nuclear weapons programme.

President Trump also said he was close to revealing his keenly awaited decision on the number of troops he plans to keep in Afghanistan.

He said he had “taken over a mess”, but was going to make it “a lot less messy”.

Speaking on Thursday at his golf club in Bedminster, New Jersey, Mr Trump also offered an olive branch to North Korea, saying the US would always consider negotiations.

He suggested his own statements had not been tough enough on Pyongyang, despite his threat this week to rain “fire and fury” upon the regime.

North Korea has dismissed his dire warnings as “nonsense”.

But Mr Trump struck a defiant tone on Thursday. He railed against previous US administrations for being too weak on North Korea, adding that its pursuit of nuclear weapons was a “tragedy”.

When asked if there was a possibility of a pre-emptive strike against Pyongyang, Mr Trump said: “We don’t talk about that. I never do.”

But he said: “I will tell you this, if North Korea does anything in terms of even thinking about attack of anybody that we love or we represent or our allies or us they can be very, very nervous.

“I’ll tell you why… because things will happen to them like they never thought possible.”

He added: “I will tell you this, North Korea better get their act together or they’re gonna be in trouble like few nations have ever been.”

North Korea said on Wednesday it planned to fire medium-to-long-range rockets towards Guam, where US strategic bombers are based.

However, there has been no indication that any attack on the Pacific island is imminent.

On the streets of Seoul, barely 50km (30 miles) from the border with North Korea, the latest developments have drawn mixed reactions. Kim Seong-su, 62, said he thought Pyongyang was bluffing to preserve its regime and justify its nuclear programme.

But others are more concerned. Yeon Eui-sook says she finds the situation scary. “I hope everyone can live in peace. Kim Jong-un keeps doing this and making us worry,” she said.

Analysts say the language from Pyongyang always gets more aggressive in August, when the US and South Korea conduct joint military exercises. But this time – with a US president who also uses strong words – the confrontation is getting even fiercer than usual.

Mr Trump meanwhile denied there were any mixed messages from his administration.

Earlier this week, US Secretary of State Rex Tillerson played down the rhetoric between the two sides.

But in an interview with the BBC on Thursday, White House Deputy Assistant Sebastian Gorka dismissed the top diplomat’s comments.

“You should listen to the president,” he said. “The idea that Secretary Tillerson is going to discuss military matters is simply nonsensical.”

Mr Gorka recalled a quote from a Holocaust survivor he often refers to when lecturing on grand strategy, saying: “When a group of people repeatedly says they want to kill you, sooner or later you should take them seriously”.

“North Korea has said they wish to annihilate the United States and use nuclear weapons. Sooner or later, somebody should take them seriously,” he said.