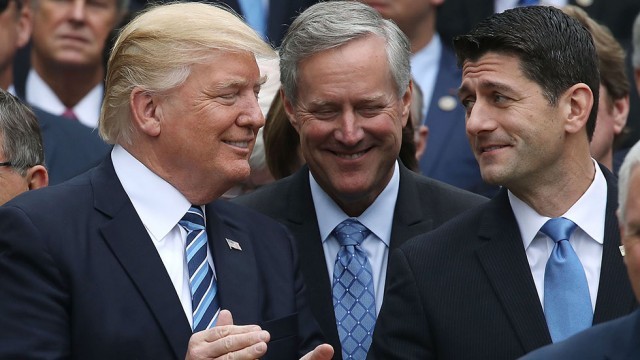 President Trump exhorted lawmakers Wednesday to resurrect the failed Republican plan to “repeal and replace” the Affordable Care Act, injecting fresh turmoil into an issue that had appeared settled the day before, when Senate leaders announced they did not have the votes to pass their bill.

Trump’s remarks, at a lunch with 49 Republican senators, prompted some of them to reopen the possibility of trying to vote on the sweeping legislation they abandoned earlier this week. But there was no new evidence that the bill could pass.

At the lunch, the president also threatened electoral consequences for senators who oppose him, suggesting that Sen. Dean Heller (R-Nev.) could lose his reelection bid next year if he does not back the effort. The president also invited conservative opposition against anyone else who stands in the way.

“Any senator who votes against starting debate is really telling America that you’re fine with Obamacare,” Trump said.

After the collapse of the Better Care Reconciliation Act, which would have repealed and replaced key portions of the Affordable Care Act, Senate Majority Leader Mitch McConnell (R-Ky.) on Monday announced plans for a vote on pure repeal instead, a move that seemed designed to either allow — or force — lawmakers to record a vote on what has been the GOP’s top campaign promise of the past seven years.

A repeal-only approach, which also lacks the votes to pass, would increase the number of people without health coverage by 17 million next year and by 32 million at the end of a decade, according to a fresh analysis released Wednesday by the Congressional Budget Office.

The forecast by the nonpartisan CBO is nearly identical to estimates the office made in January based on a similar bill that passed the House and Senate in late 2015 — and that was vetoed by President Barack Obama.

“I think we all agree it’s better to both repeal and replace. But we could have a vote on either,” McConnell said after the lunch at the White House.

Trump’s remarks introduced a new level of chaos into the GOP, potentially setting up Senate Republicans to take the blame from angry conservatives for failing to fulfill a long-standing GOP vow.

The effort to undo the Affordable Care Act has been fraught for months with internal GOP divisions. The intraparty tension looms over other big-ticket items Republicans are hoping to pass as they control both chambers of Congress and the White House, including passing a budget and enacting major tax cuts. After six months, they can boast no major legislative achievements.

And now, Republican lawmakers head into the 2018 midterm cycle with a president who appears capable of not having their backs.

Despite those tensions, Trump claimed at the lunch that “we’re very close” to passing a repeal-and-replace bill. It was the latest sign of the disconnect between the president and the Senate. It also came a day after Trump tweeted “let ObamaCare fail” — and two days after he called for a repeal-only bill.

The White House appeared determined to keep trying for something. Vice President Pence, Health and Human Services Secretary Tom Price and Centers for Medicare & Medicaid Services director Seema Verma met with roughly two dozen GOP senators for nearly three hours on Capitol Hill on Wednesday evening. The meeting was arranged by the White House to help persuade wavering senators to back the repeal-and-replace bill, according to people familiar with the meeting who spoke on the condition of anonymity to discuss private planning.

Following the meeting, several senators described the talks as productive, but none would name specific areas of progress or new agreement that resulted from the gathering.

Even as Trump’s team tried to work out policy and political disagreements among members, the president was strong-arming skeptical senators in public. Seated directly to Trump’s right at Wednesday’s lunch was Heller, who is up for reelection in 2018 in a state Democrat Hillary Clinton won.

“Look, he wants to remain a senator, doesn’t he?” Trump asked, Heller smiling at his side. “Okay, and I think the people of your state, which I know very well, I think they’re going to appreciate what you hopefully will do.”

Tensions have been evident for a while. After Heller came out against an earlier version of the Senate bill, a conservative organization aligned with Trump vowed to launch an expensive ad campaign against him, angering and shocking many mainstream GOP allies of the senator. Later, the group backed off.

Now, senators are not sure what they will be voting on in the coming days — pure repeal or repeal and replace.

“See, that hasn’t been decided. That’s part of the discussion. So, that’s why I don’t take a position at this point,” Heller said.

Sen. John Cornyn (R-Tex.), McConnell’s top deputy, said Wednesday: “I know it seems like we’ve got a bit of whiplash, but I think we’re making progress.”

But even he had no clarity on the next step. “We’re still discussing,” he said.

Sen. Lamar Alexander (R-Tenn.), the chairman of the Health, Education, Labor and Pensions Committee, told reporters Wednesday that there still are not enough votes for a repeal-only bill.

Separately Wednesday, members of the hard-right House Freedom Caucus started the process of bringing a repeal-only bill to the House floor — a process meant to sidestep GOP leaders reluctant to expose vulnerable members to a politically perilous vote on legislation unlikely to become law.

The House passed its own revision to the Affordable Care Act earlier this year. Wednesday’s gambit would not only allow conservatives to vote for a straight-repeal bill but also force moderates to do the same — adding to the political divisions that Trump had stoked earlier in the day.

“The American people do not know why we did not have something on President Trump’s desk on Jan. 20,” said Rep. Mark Meadows (R-N.C.), the group’s chairman. “Here we are at July 20 with nothing to show for it, and they’re tired of waiting.”

Sen. Ron Johnson (R-Wis.), who has expressed opposition at various times during the months-long health-care drive, said that he understood Trump’s push for repeal and replace at the lunch as a call to return to the broader bill McConnell pulled back earlier this week.

Even GOP senators who oppose the repeal efforts worry about being blamed for failing to act on health care. A recent Gallup poll found that 70 percent of GOP respondents said they support repealing and replacing Obamacare.

“They campaigned on ­REPEAL,” says the website, which the Club for Growth and Tea Party Patriots launched. But now, it says, “they are betraying their constituents by joining with Democrats to defeat Obamacare Repeal efforts!”

Capito has said that she supports repealing the Affordable Care Act, but only if it can be replaced with a bill that doesn’t force millions off their insurance and doesn’t “hurt people.”

“I think we all want to get to the right place,” Capito said after the White House lunch. On Twitter, she sought to use Trump’s words to defend her position, writing: “I’m glad @POTUS agrees that we cannot move to repeal Obamacare without a replacement plan that addresses the needs of West Virginians.”

At the lunch, Trump said, “People should not leave town unless we have a health insurance plan, unless we give our people great health care,” meaning that recess plans should be put off if a deal isn’t reached. Marc Short, the White House’s legislative director, told reporters afterward that “this is not something that we can walk away from.”

Trump, who had invited Republican leaders to a health-care strategy dinner Monday night, was apparently blindsided by the opposition from some conservative members, including Sens. Mike Lee (R-Utah) and Jerry Moran (R-Kan.), whose declared no votes effectively killed the legislation. At lunch, he scolded them.

“The other night, I was surprised when I heard a couple of my friends — my friends — they really were and are,” Trump said, without directly naming the duo. “They might not be very much longer, but that’s okay.”

Trump, as he has done numerous times in recent weeks, reminded the lawmakers that Republicans campaigned against the Affordable Care Act for years and that their supporters are counting on them to make good on their promises.

“I’m ready to act,” Trump said. “I have my pen in hand. I’m sitting in that office. I have pen in hand. You’ve never had that before. For seven years, you’ve had the easy route — we repeal, we replace, but he [Obama] never signs it. I’m signing it. So it’s a little different.”