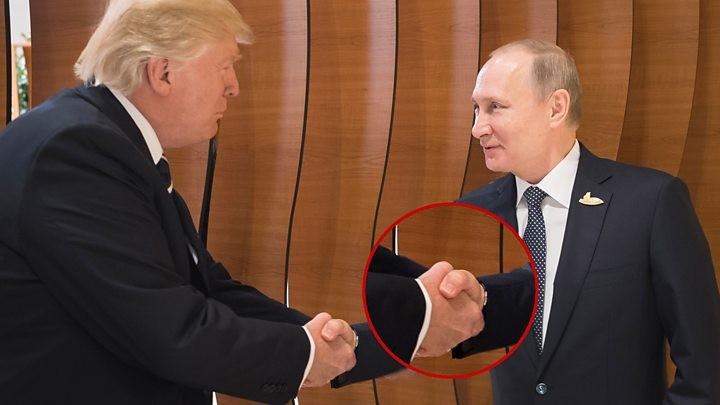 Leaders of both parties in the US Congress have agreed on legislation that allows fresh sanctions to punish Russia for alleged election meddling.

He has previously said he needs diplomatic leeway with the Kremlin.

Mr Trump’s time in office has been dogged by claims that Russia tried to influence last year’s US election.

Moscow denies any wrongdoing but several US investigations are looking into whether anyone in the Trump campaign colluded with Russian officials.

Correspondents say the bipartisan agreement indicates determination in Congress to maintain a firm line against Russia, whatever Mr Trump’s view.

On the other hand, if he signs it he would be imposing legislation that his administration is opposed to.

Senator Ben Cardin, the most senior Democrat on the Senate Foreign Relations Committee, said agreement was reached after “intense negotiations.”

“A nearly united Congress is poised to send President Putin a clear message on behalf of the American people and our allies, and we need President Trump to help us deliver that message,” he said.

Chuck Schumer, Senate Democratic leader, said the House of Representatives and the Senate would act on the legislation “promptly, on a broad bipartisan basis”. He said a strong sanctions bill was “essential”.

The bill also covers the possibility of further sanctions against Iran and North Korea. It has already passed the Senate and the House is due to vote on it on Tuesday.

The legislation would allow new sanctions against Russia for its 2014 annexation of Crimea as well as for its alleged meddling in the US election.

The Kremlin has demanded that the seized compounds be returned and has threatened “specific measures” in retaliation.

After high-level talks last week, one Russian official involved said the row had “almost” been resolved.

However, the new US bill would make it hard for President Trump to alter sanctions or return diplomatic properties without the approval of Congress.

During his presidential campaign, Mr Trump hinted he would consider recognising Crimea as part of Russia and suggested lifting sanctions.

US authorities continue to investigate possible collusion between the Trump team and Russia, claims Mr Trump has repeatedly denied.

In a new twist on Saturday, reports emerged that Mr Trump was considering presidential pardons for family members, aides and even himself.

Presidents have the power to pardon people before guilt is established or even before the person is charged with a crime.

He tweeted: “While all agree the U.S. President has the complete power to pardon, why think of that when only crime so far is LEAKS against us. FAKE NEWS.”

Senator Mark Warner, a Democrat who sits on the Senate Select Committee on Intelligence, described the reports as disturbing, adding: “Pardoning any individuals who may have been involved would be crossing a fundamental line.”