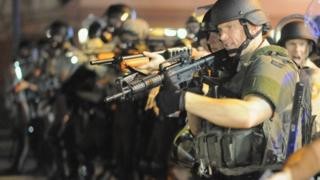 US President Donald Trump has lifted restrictions imposed by Barack Obama on the transfer of surplus military-style equipment to the police.

An executive order provides police with items including bullet-proof helmets and armoured vehicles.

Mr Obama barred the military from handing over some types of military equipment to police after unrest in Ferguson, Missouri.

The ban followed criticism that police were too heavy handed in dealing with the protests that followed the killing of an unarmed black teenager by a white police officer in 2014.

The former US president was concerned about public reaction to images of heavily militarised police on the streets, saying it was important that police were perceived to be part of the community than being seen as an occupying force.

‘We have your back’

“We will not put superficial concerns above public safety,” he told a meeting of police officers.

“The executive order… will ensure that you can get the lifesaving gear that you need to do your job and send a strong message that we will not allow criminal activity, violence, and lawlessness to become the new normal.

“We have your back and you have our thanks,” he told the police convention.

Under the terms of the executive order, government agencies are compelled to take prompt action to reverse President Obama’s rules.

But the order has been criticised by civil rights groups and some Republicans in Congress.

“It is one thing for federal officials to work with local authorities to reduce or solve crime, but it is another for them to subsidise militarisation,” Senator Rand Paul said in a statement.

Mr Paul said that he would work to introduce legislation to ensure there was transparency in relation to such transfers so that law enforcement agencies do not to gain possession of equipment which remains prohibited.