Trump on Charlottesville: Racism is evil 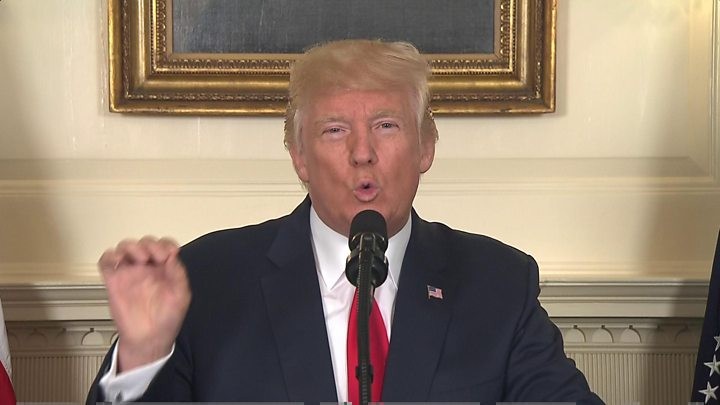 US President Donald Trump has spoken out against racist violence after the killing of a protester in Charlottesville, Virginia, on Saturday.

“Racism is evil and those who cause violence in its name are criminals and thugs,” he told reporters.

He said the Ku Klux Klan, neo-Nazis and white supremacists were “repugnant” to everything Americans held dear.

Mr Trump was criticised for not specifically denouncing extremists in his initial comments on the violence.

Heather Heyer, 32, died and 19 others were hurt when a car rammed into people protesting against a far-right march.

James Alex Fields, 20, was formally charged on Monday with second-degree murder, three counts of malicious wounding and one count of hit and run. He was also denied bail during his appearance in court via video from jail.

He is said to have harboured Nazi sympathies.

The justice department is opening a civil rights investigation into the incident.

On Monday, Mr Trump arrived back at the White House to issue a comprehensive condemnation.

“We condemn this egregious display of hatred, bigotry and violence,” he said. “It has no place in America.”

“Those who spread violence in the name of bigotry strike at the very core of America,”

He paid tribute to Ms Heyer as well as two police officers killed in a helicopter crash after helping to tackle the unrest.

A fire of Trump’s own making

On Monday afternoon Donald Trump tried to put out yet another fire of his own making. The president prefaced his explicit condemnation of the KKK, neo-Nazis and other white supremacists with the words “as I said on Saturday” – but the problem was he had said nothing of the sort.

In the hours after the violence in Charlottesville, Mr Trump had offered a broad condemnation of “many sides” – and caught hell for it from liberals and members of his own party, who felt compelled to break ranks with their leader.

Two days later, the president was in front of cameras again, with words that should have been easy – and obvious to most in a nation that expects its presidents to be comfortable condemning racist extremism.

Even on Monday, however, the president’s strong words were undermined somewhat by his off-topic introductory boasts of the nation’s economic strength and the fact that his obviously carefully crafted statement was read off teleprompters – a practice for which candidate Trump regularly mocked Barack Obama.

After finishing his remarks, the president quickly exited the room, as reporters asked why he had not spoken sooner. The president did not answer, but such questions will follow him in the days ahead.

Hundreds of white nationalists had convened in Charlottesville to protest against the removal of a statue of a general who had fought for the pro-slavery Confederacy during the US Civil War.

They were challenged by anti-fascist and counter-protesters and the rally erupted into violent clashes. Shortly after, Ms Heyer and several others who were leaving the area were struck by the car.

Protests and vigils in solidarity with the victims were held in many US cities on Sunday. In Seattle, police used pepper spray to stop protesters approaching a pro-Trump rally.

Among those to criticise Mr Trump was Ken Frazier, CEO of drugs giant Merck, who announced on Monday he would resign from the president’s American Manufacturing Council.

Mr Frazier, who is African American, tweeted that he had “a responsibility to take a stand against intolerance and extremism”.

John Kerry, who was US secretary of state under Barack Obama, said that Mr Trump’s initial reaction to the death in Virginia had been more telling.

“No matter what @potus says now-first instincts always revealing; his was to look into the camera and say ‘many sides’ – that cant be erased,” he wrote in a tweet.