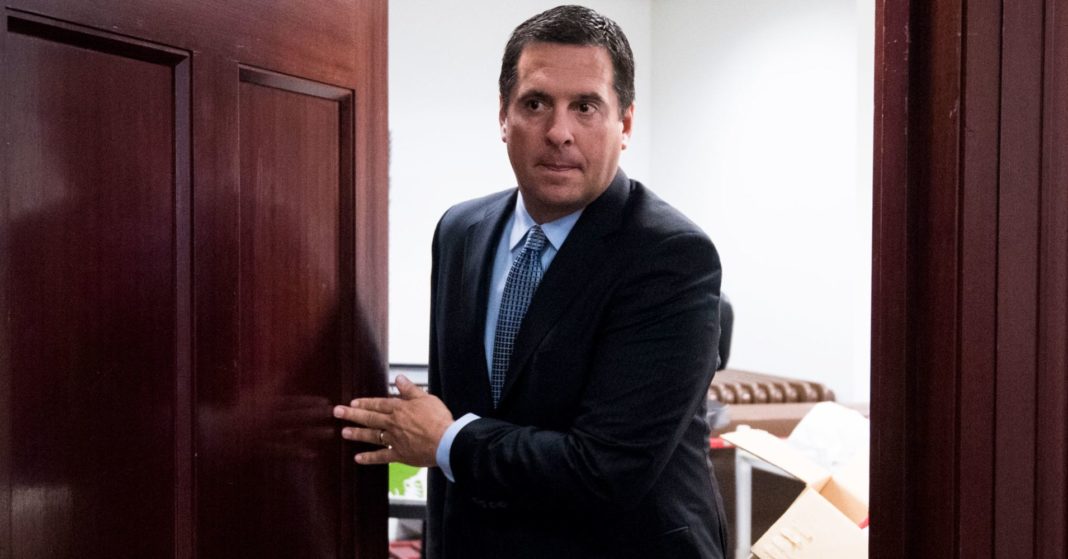 Republican Rep. Devin Nunes, a staunch supporter of President Donald Trump, may have the bull’s-eye on his back from Democrats, but he’s in a district in California’s Central Valley that’s consistently voted 63 percent or above to keep him in Congress for nearly two decades.

Yet this time, the race appears much tighter with Democratic challenger Andrew Janz, a county prosecutor, rising in the most recent polling. Nunes, an eight-term incumbent who chairs the House Intelligence Committee, may be starting to lose some support in the 22nd Congressional District due to distractions.

Those distractions include the Trump-Russia investigation and what one local newspaper called a “list of unflattering Nunes news events over the summer,” such as using campaign donations to purchase Celtics tickets and personal trips.

The district is largely spread across in Fresno and Tulare counties in the San Joaquin Valley — an agricultural mecca where water has long been a hot political issue. More recently, the region has found itself a target in a global trade war as retaliatory tariffs have hit a wide swath of agricultural products.

“Tulare County is a red dot in a blue state,” said Joey Airoso, co-owner and partner of a family dairy business and former president of the Tulare County Farm Bureau. “What Devin recognized 15 years ago was that the environmental movement was going to try to take away the water we use here in the south valley to grow food for everybody.”

Polling in the race has been relatively sparse. Leading elections-analysis sites say Nunes is likely to hold onto his seat. The margin may end up being tighter than Nunes is used to, however.

With Election Day 10 weeks away, the latest polling shows Nunes ahead by 5 percentage points, according to a poll conducted in late July of 400 likely voters in the district by Democratic polling company Tulchin Research. It’s unclear who paid for the poll; San Francisco-based Tulchin wouldn’t identify the funder.

By comparison, a poll conducted shortly after the June primary found an 8-point lead for the incumbent. That poll was a Democratic PAC-funded survey of 632 likely voters and done by Public Policy Polling, a left-leaning polling firm.

“Nunes, as chair of the House Intelligence Committee, is seen a lot less in the district overall — at least that’s the perception,” said Thomas Holyoke, a professor of political science at California State University, Fresno. “A lot of people here see the Russian investigation as probably a distraction, although some people in the district may agree with Congressman Nunes that it’s all a ‘witch hunt’ against Donald Trump.”

On Tuesday, the Atlantic reported that Nunes made a trip earlier this month to London to meet with top British intelligence officials about Christopher Steele, the former spy who compiled the infamous dossier on Russia ties to the Trump campaign. The report said British intelligence agencies, including MI6, “didn’t seem interested.”

For his part, Nunes is known for authoring the once-secret memo alleging surveillance abuse by the FBI and Department of Justice. Rep. Adam Schiff, D-Calif., the ranking member of the Intelligence Committee, charged afterward that “Nunes used this memo to mislead the House.”

A native of Tulare, Nunes worked on his family’s farm and raised cattle as a teenager. He used savings to buy farmland with his brother. Today he’s one of the most powerful Republicans in the House but also a polarizing figure in national politics.

“If I was Devin Nunes, and I wanted to run the worst possible campaign and give my opponent the best possible chance to win, I would do exactly what he’s doing,” said Joe Altschule, a Visalia attorney and former chair of the Tulare County Democratic Central Committee. “Essentially what you’ve got is a campaign of silence. Nunes runs away, he hasn’t done a town hall here in 10 years, he’s currently out of the country … and he’s at war with the Fresno Bee, his hometown newspaper. People here who watch this think, has he lost it?”

As for town halls, Nunes has said in the past that he prefers to do forums on big issues such as water rather than hold town hall events with constituents. The 44-year-old lawmaker also has claimed the push to get him to do town halls is “an orchestrated effort by the left” to create “gotcha” moments.

“Every member has their own way of doing things,” Nunes said in February during an interview with Central Valley’s conservative radio host Ray Appleton. “Just to create a YouTube moment…I’m not going to play that game.”

Regardless, Nunes has a war chest of more than $6 million in cash on hand for the battle and political experts suggest he could probably raise more given his senior position in the House GOP hierarchy. Janz, meanwhile, has about $1.1 million in cash remaining, according to the latest federal filing data.

Janz, a 34-year-old deputy district attorney in the violent crimes unit for Fresno County, is counting on voters wanting a change and his no-nonsense message about criminal justice reform. He also supports increased funding for border security, but wants to see a work visa program that will help agricultural producers facing farm labor shortages.

Janz saw contributions surge after the memo controversy. He’s received contributions from several billionaires, including Tom Steyer, a liberal Bay Area activist who is leading a multimillion-dollar campaign to impeach Trump and could have presidential aspirations of his own. But the Janz campaign has said they’ve received much more money from in-district donations than the incumbent.

It doesn’t matter to Nunes’ staunchest supporters, however.

“They can bring in as much money as they want, but it’s pretty hard to break the spirit of people that know what’s inside of somebody like Devin,” said Airoso, the dairy farmer. “I’ve known Devin my whole life, since he was a little guy, and I know the kind of honesty and integrity that he possesses. I believe most of the people here in the community know that, too.”

Experts consider Janz the strongest challenger Nunes has ever faced since he went to Congress in 2003. They say Janz has been able to create a larger base of support, more fundraising capabilities and could benefit from Hispanic voter turnout and Democratic-leaning independents in November.

Registered Republicans in the district outnumber registered Democrats by a margin of 42 percent to 32 percent.

“The reason why Republicans keep getting sent to Congress in this region is because the Democratic Party has abandoned the Central Valley,” Janz told CNBC. “This is a region that shouldn’t be voting and sending Republicans to Congress every single year. We have 60 percent of the people that live here that rely on some form of government assistance.”

Janz, who was raised in Visalia, said he’s optimistic about the way the campaign is going and predicts “we will do very well on election night. I think a lot of people are going to be surprised.”

Still, California’s 22nd Congressional District is listed by the Cook Political Report, a nonpartisan elections analyst, as “solid Republican.” Sabato’s Crystal Ball, a political forecasting website run by the University of Virginia Center for Politics, has had it listed as “likely Republican.”

Trump won the conservative district in the 2016 election by nearly 10 percentage points. It was the lowest margin of victory among Republican presidential contenders there in almost two decades.

Despite being one of Trump’s biggest defenders, Nunes hasn’t always agreed with the president. For example, Nunes was a supporter of the Trans-Pacific Partnership trade deal that Trump scrapped once in office.

Nunes also was one of the Republican House members from California last month who wrote a letter to call attention to the Trump administration for overlooking the needs of specialty-crop markets in the federal government’s $12 billion effort to mitigate retaliatory tariffs from China and others. As it turns out, the U.S. Department of Agriculture provided more details on the aid program Monday — and it now includes help for various specialty crop markets, including growers of oranges and nuts.

Even so, political analysts suggest Nunes could be hurt from trade war fallout if farmers link him to Trump’s policies. Tulare County happens to be the nation’s top milk-producing county, and dairy products were hit with retaliatory tariffs imposed by China and others.

Sherry Bebitch Jeffe, a senior fellow at the University of Southern California’s Price School of Public Policy, said some farmers could see Nunes as “joined at the hip to Trump if the economy of the district gets to be wobbly. I have to believe there will be some hurting people in that district from the trade situation.”

Janz has said the tariffs are essentially “taxes that hurt our local farming communities.”

At the same time, Janz sees Nunes as vulnerable on the water issue, coming at a time when California is starting to see drought spread once again in various parts of the state. The latest Drought Monitor map shows “abnormally dry” and “moderate drought” in key sections of California’s Central Valley where farmers grow everything from almonds, pistachios and hay to peaches, oranges, plums and grapes.

“Nunes has been in office for nearly two decades, and he’s been unable to get us the water that we need,” said Janz, who calls water the top issue in the district. “So what I’m telling farmers is that … he hasn’t fulfilled his promise or his obligation so why don’t you give me a shot and let me tackle the water issue.”

According to Janz, Nunes “has pushed this narrative that somehow you can’t be pro-environment and pro-farmer at the same time. The growers and farmers that I talked to will tell you that the environment is very important to them because, if they don’t take care of their land that they’re farming, it really undermines what they’re trying to do for their families and business.”

Nunes has previously claimed the Bay Area is siphoning away precious water that should go to farmers in the Central Valley, and he faults “radical” environmentalists from Hollywood and San Francisco for using water to protect “a stupid little fish,” the delta smelt, that’s native to the San Francisco Bay delta.

He also believes California in sending water out to the Pacific is making sea levels rise. But experts suggest the state’s water has little impact on a body of water that covers almost one-third of the Earth’s surface.

“So the left always talks about wanting to protect people, wanting people to be able to work, yet we have people with no water in their homes, and yet they are willing to see 92 percent of the water flush right out by the Golden Gate Bridge and be wasted for an ocean that supposedly is filling up,” Nunes said last year during a House discussion of the water bill. “Well, if you believe the oceans are rising, why would you want more water to flow out into the ocean? I don’t understand that.