President Trump faces losing support from his base in the wake of his decision Friday to sign a controversial and much-derided $1.3 trillion spending bill — over not only its size but its failure to fund his campaign promise of a wall on the U.S. southern border.

Trump briefly threatened to veto the legislation, voted through the House and Senate on Thursday and early Friday in order to avoid a government shutdown.

Conservatives balked at the $1.3 trillion price tag, as well as the failure to promote Republican causes such as the defunding of Planned Parenthood and the funding of the wall on the southern border in particular. While the legislation served up $1.6 billion for border security, it mainly consisted of repairs and additions to already existing fencing.

Congressional leaders and the White House noted that it increased funding for the military, infrastructure and also grants to fight the nation’s opioid epidemic.

Trump blindsided White House aides and lawmakers when he tweeted Friday morning that he was considering vetoing the legislation over its failure to include funding for the border wall as well as a fix for the expiring Obama-era Deferred Action for Childhood Arrivals program that grants protection to illegal immigrants brought to the country as children.

But Trump eventually signed the mammoth legislation reluctantly, saying in remarks to the press with other members of the administration that, in order to secure a necessary increase in military spending, he had to give money to Democratic projects that he derided as a “wasted sum of money.”

“It’s not right, and it’s very bad for our country,” he said.

But he said military spending was vital and it was that concern that overrode his thoughts about vetoing the legislation. 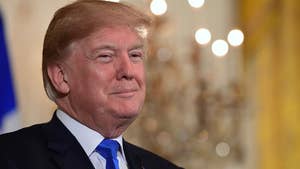 “Therefore, as a matter of national security, I’ve signed this omnibus budget bill. There are a lot of things I’m unhappy about in this bill…But I say to Congress, I will never sign another bill like this again. I’m not going to do it again,” he said.

Yet despite his distancing himself from it, the very act of him signing it enraged his base. A White House official told Axios that the reaction to the signing “is the hardest I’ve ever seen the base turn on Trump over anything.”

“A big reason why people voted for him was because of his apparent willingness to stand up to the entrenched political class in both parties,” the official said. “Voters wanted a fighter who wouldn’t back down to ‘the swamp’ like a ‘typical politician.'”

Conservative commentator Ann Coulter, who in 2016 wrote a book called “In Trump we Trust,” told Fox News Radio’s Tom Shillue that the ramifications will hit the GOP in the midterms, particularly in the House.

“The House will definitely flip, why would anyone vote Republican?” she said.

On Twitter, she also congratulated “President Schumer” and agreed with Trump that he won’t sign another bill like that, but added that was because a Democratic House would impeach him.

“The president was really sold a bill of goods here,” Christopher Ruddy, Newsmax’s chief executive, who is regularly in touch with Trump, told The Washington Post. “Conservatives look at this omnibus bill and say, ‘This is not why they elected Donald Trump. This is not a good bill for him to sign.’ ”

Commentator Michelle Malkin said on “Fox and Friends” that she was “disgusted” with the legislation, but aimed most of her anger at congressional leadership.

“I’m beyond disappointed; I’m disgusted,” Malkin said. “I’m disgusted with the so-called GOP leadership. This falls squarely on the shoulders of Paul Ryan and Mitch McConnell. It is business as usual.”

Even in Congress, there was significant opposition to the legislation. The conservative House Freedom Caucus had encouraged Trump ahead of the signing to veto the bill, while budget hawk Sen. Rand Paul, R-Ky., repeatedly slammed the bill, later saying: “Maybe the GOP holding hands Democrats isn’t such a great idea.”

The Trump team continued to point the blame at Congress, with Trump campaign advisor Katrina Pierson tweeting back to Paul: “It would be more helpful to change out your leadership instead of doing everything possible to keep them in place.”

But other advisers were less supportive of the president.

“This was the worst day since the 2016 win. Signing that Bush/Obama budget was a kick in the gut,” a conservative advisor to Trump, but not in the White House, told Fox News. “I still love this President but, wow, hard to swallow this bitter pill. Funded Planned Parenthood and not a wall. What did we fight so hard for?”