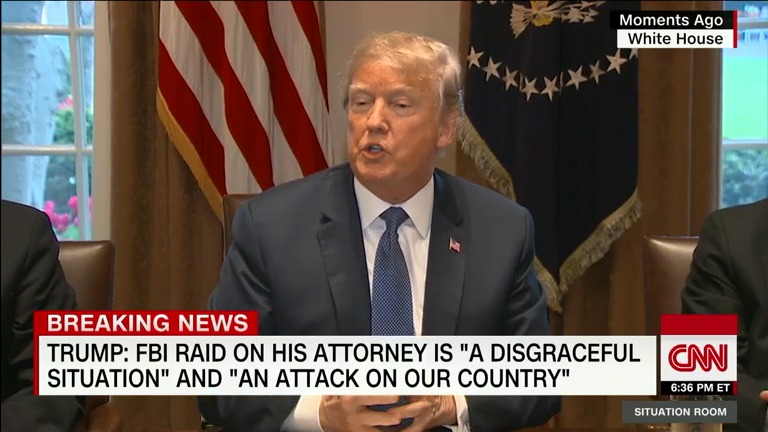 US President Donald Trump says a decision on action in Syria will be made “fairly soon”.

He told reporters that he and his team were looking “very, very seriously” at the situation, following an alleged chemical attack on the town of Douma.

Western powers are thought to be preparing for strikes but Russia, a Syrian ally, opposes such action.

Moscow’s UN envoy Vassily Nebenzia said he “cannot exclude” the possibility of a war between Russia and the US.

“The immediate priority is to avert the danger of war,” he told reporters on Thursday.

Also on Thursday, French President Emmanuel Macron said he had “proof” that the Syrian government had attacked Douma with chemical weapons.

In the UK, cabinet ministers agreed “on the need to take action” in Syria to “deter the further use of chemical weapons”, the office of Prime Minister Theresa May said.

Mrs May spoke with President Trump late on Thursday and they agreed to “keep working closely” on the issue, her office said in a statement.

The White House says Mr Trump will also speak to his French counterpart.

The UN Security Council is to hold an emergency meeting later to discuss the crisis.

What has Trump said about the attack?

On Sunday, the day after the attack, the US president said Russian President Vladimir Putin bore responsibility for the “atrocity” in rebel-held Douma, because of his support for the Syrian government.

Mr Trump, who has cancelled a planned trip abroad, has been canvassing support for strikes from the leaders of France and the UK.

On Wednesday he said the missiles were “coming”, but on Thursday he tweeted that he had “never said when”. It “could be very soon or not so soon at all”, he said.

He later told reporters at the White House: “We’re having a meeting today on Syria… We have to make some further decisions. So they’ll be made fairly soon.”

Also on Thursday, US Secretary of Defence Jim Mattis told a congressional panel: “I believe there was a chemical attack and we are looking for the actual evidence.”

What happened in Douma?

President Assad’s government denies being behind any chemical attack.

The international Organisation for the Prohibition of Chemical Weapons (OPCW) is set to send monitors to Douma to gather evidence.

On Thursday US officials were quoted as saying that samples from victims have tested positive for chlorine and a nerve agent.

Douma was the last major rebel stronghold near Damascus. Local activists say the main leaders of the group that held it have left, following an agreement between Russia and the rebels.

A year ago, Russian President Vladimir Putin stood grim-faced in the opulence of France’s Versailles Palace, as a newly elected Emmanuel Macron announced that the use of chemical weapons in Syria “would result in reprisal and an immediate response”.

Now Mr Macron – who likes to be seen as a president who does what he says he will do – is facing the test of what “reprisal” actually means.

Former US President Barack Obama was derided in France for not following through on his own “red line” after Syrian attacks five years ago.

“When you fix red lines,” Mr Macron told a French newspaper last year, “if you can’t enforce them, you decide to be weak.”

Strength is an important part of President Macron’s bid to project French influence – and a key element, too, of his new political friendship with his US counterpart Donald Trump.

What is Russia’s position?

Russia has described the reports of a chemical attack as a “provocation” designed to justify Western intervention.

Senior Russian figures have warned that missiles threatening the country’s forces in Syria will be shot down and their launch sites targeted.

President Vladimir Putin said on Wednesday that he hoped common sense would prevail and that the situation would stabilise.