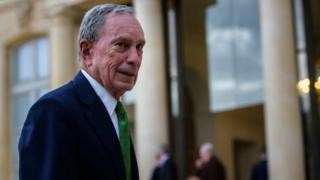 The US can still meet its commitments to fight climate change, despite President Donald Trump’s withdrawal from the Paris accord, former New York Mayor Michael Bloomberg has said.

He argued this could be done “through partnerships among cities, states and businesses”, saying Americans would not let Washington stand in their way.

Mr Bloomberg is the UN special envoy for cities and climate change.

China, the EU and India, which along with the US make up the four biggest emitters of carbon dioxide, restated their commitment to the accord.

It commits the US and 194 other countries to keeping rising global temperatures “well below” 2 degrees C above pre-industrial levels and “endeavour to limit” them even more, to 1.5C.

The UN World Meteorological Organisation said that, in the worst scenario, the US pullout could add 0.3C to global temperatures by the end of the century.

“Americans don’t need Washington to meet our Paris commitments, and Americans are not going to let Washington stand in the way of fulfilling it,” Bloomberg said, following talks with French President Emmanuel Macron in Paris.

“I want the world to know that the US will meet its Paris commitments and that through partnerships among cities, states and businesses we will seek to remain part of the Paris agreement process.

“We are already halfway there and we can accelerate our process further even without any support from Washington,” Mr Bloomberg added.

Meanwhile, President Macron restated his position that the Paris accord was “irreversible” and would be implemented.

Why is Trump pulling out?

Mr Trump on Thursday characterised the Paris agreement as a deal that aimed to hobble, disadvantage and impoverish the US.

He said it would cost the US $3tn (£2.3tn) in lost GDP and 6.5 million jobs – while rival economies like China and India were treated more favourably.

Mr Trump said he was fulfilling his “solemn duty to protect America and its citizens”.

Secretary of State Rex Tillerson said the US had a “terrific record on reducing our own greenhouse gas emissions”.

The head of the US Environmental Protection Agency, Scott Pruitt, said exiting the Paris Agreement did not mean disengagement.

“The president said yesterday (Thursday) that Paris represents a bad deal for this country,” he told reporters at the White House.

“It doesn’t mean that we’re not going to continue the discussion to export our innovation, to export our technology to the rest of the world, to demonstrate how we do it better here.”

Can it all be renegotiated?

Under the terms of the agreement, the US cannot complete its withdrawal until just weeks after the US presidential election in 2020.

US payments to the UN Green Climate Fund, which helps developing countries cope with the effects of climate change, will stop. The US has reportedly so far paid $1bn (£780m) of a $3bn pledge.

Mr Trump indicated he was open to another climate deal “on terms that are fair to the United States” but the leaders of France, Germany and Italy quickly issued a joint statement rejecting any renegotiation.

What are they saying in America?

The Democratic governors of New York, California and Washington states all quickly vowed to respect the terms of the Paris deal.

Disney’s chief executive Robert Iger and the entrepreneur Elon Musk both resigned from White House advisory councils in opposition to the decision.

However, Republican congressional leaders and the US coal industry backed the move, with Senate Majority Leader Mitch McConnell supporting Mr Trump “for dealing yet another significant blow to the Obama administration’s assault on domestic energy production and jobs”.

Climate change, or global warming, refers to the damaging effect of gases, or emissions, released from industry, transportation, agriculture and other areas into the atmosphere.

The Paris accord is meant to limit the global rise in temperature attributed to emissions. Only Syria and Nicaragua did not sign up.

Nasa’s Goddard Institute for Space Studies says the world’s average temperature has risen by about 0.8C since 1880, two-thirds of that since 1975.

US think tank Climate Interactive predicts that if all nations fully achieve their Paris pledges, the average global surface temperature rise by 2100 will be 3.3C, or 3.6C without the US.