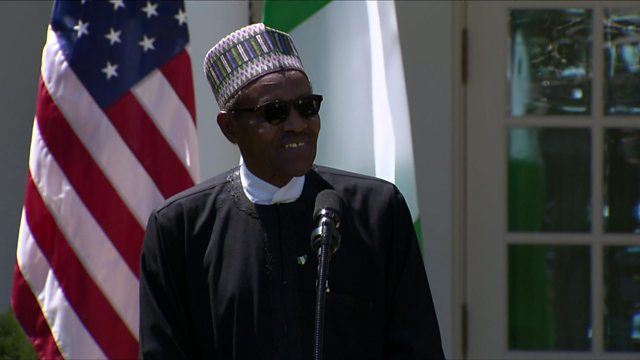 US President Donald Trump’s reported disparaging of African countries did not come up in his talks with Nigeria’s president, the two leaders have said.

Muhammadu Buhari sidestepped a reporter’s question about Mr Trump’s alleged use of the term “shitholes” to describe certain developing nations.

In their White House news conference, Mr Trump added: “We didn’t discuss it.”

The Nigerian was the first sub-Saharan African leader to be invited for talks with the Trump administration.

Mr Buhari was asked during Monday’s joint press conference about a report in January that Mr Trump had complained about immigrants coming to the US from “shithole countries”, specifically referring to Haiti, El Salvador and some African nations.

The Nigerian president diplomatically replied: “I’m not sure about, you know, the validity of whether that allegation against the president is true or not.

“So the best thing for me is to keep quiet.”

Mr Trump did not deny he had used the term in his own reply.

“The [Nigerian] president knows me and he knows where I’m coming from,” he said.

“And you do have some countries that are in very bad shape and very tough places to live in.”

Mr Trump took the opportunity to rail against US immigration laws, calling them “obsolete”, “weak” and “pathetic”.

“Our immigration laws in this country are a total disaster,” he said, renewing calls for a border wall.

The White House recently sold 12 counter insurgency aircraft worth $496m (£360m) to Nigeria to help in its fight against Boko Haram jihadist insurgents.

Mr Trump said he hoped the Nigerian authorities would “protect innocent civilians of all faiths, including Muslims and including Christians”.

He also addressed sectarian strife in the African country, where 18 people, including two priests, were killed in an attack last week on a church.

“We’ve had serious problems with Christians who have been murdered, killed,” Mr Trump said. “We’re going to work on that problem and working on that problem very, very hard.”

Fighting terrorism is a priority for both administrations, our correspondent says.

This is another contentious issue as the Nigerian government has been trying to develop its own agriculture sector as it seeks to deal with mass unemployment and an economy reliant on oil.

At home, President Buhari faces multiple security challenges, including the nine-year-old insurgency by Boko Haram in the north-east, and mounting insecurity in the centre of the country.