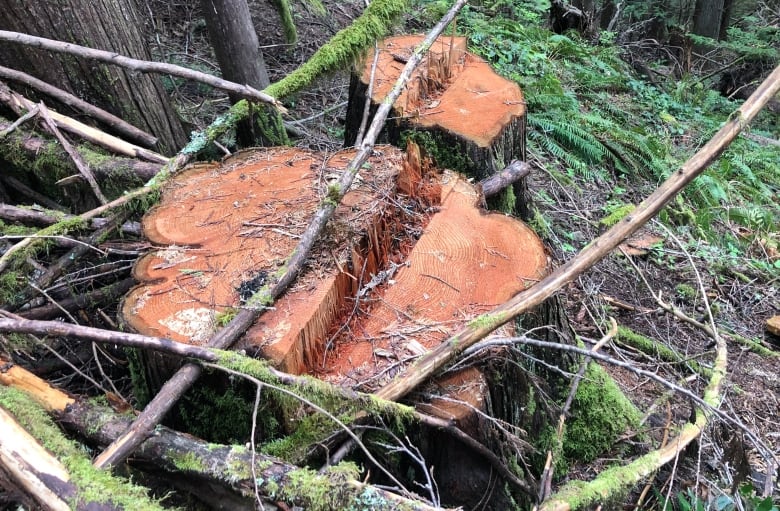 The municipality of North Cowichan is stepping up patrols of the region’s forest reserve, after an increase in timber theft in the area, which lies 70 kilometres north of Victoria on Vancouver Island.

Since January, approximately 100 trees, including Douglas fir and Western red cedars have been poached and local residents and officials believe the spike is likely tied to the surge in lumber prices.

North Cowichan resident Larry Pynn stumbled upon a large cedar tree stump along slabs of crudely cut wood while he was out for a walk two weeks ago in a forested area known as Stoney Hill.

“I immediately thought that this had to be the work of a poacher,” he said in an interview with CBC News.

“Something like this is not being taken for firewood. It’s a valuable tree.”

Pynn estimated the tree was 87 years old because he counted the rings on the remaining stump.

Not far from it, the mossy ground had been torn up by what appeared to be ATV tracks.

Local officials say it’s not clear who took the tree or how they managed to get it out of the woods, but it is one of several large trees that have been poached since the beginning of the year in the North Cowichan Municipal Forest Reserve.

The 5,000-hectare forest is owned by the municipality and is part of the coastal Douglas fir ecosystem, which is considered endangered because of logging and development.

While the area has been logged in the past, the activity is on hold while the community and nearby First Nations discuss how to manage the forest going forward.

Municipal officials say they have learned of several timber thefts in recent months, including one incident where 50 Douglas fir trees were taken.

“It was definitely a concentrated effort,” said Shaun Mason, the municipal forester for North Cowichan.

“That is something we haven’t seen in the past before and what is more concerning is that other areas are popping up despite our efforts to try and curb it.”

Mason said patrols are now taking place in the forest seven days a week, up from about once a week. However, he said it is a challenge to try to cover a vast and densely wooded area.

The municipality is also considering installing cameras at certain locations in the forest.

Under North Cowichan’s bylaws, a person can be fined $200 if they “remove forest products without a permit.”

When it comes to trees taken from provincial Crown land, the penalty could be as much as $1 million, but legal experts say those who are caught are usually fined just $173.

“It’s really important that people feel that if they are caught, that there will be real consequences and a $200 penalty doesn’t cut it,” said Andrew Gage, a lawyer with West Coast Environmental Law who reviewed a provincial database that detailed the fines levied by the province.

The B.C. ministry responsible for forests said that in the past 10 years, it has issued 728 penalties to people who removed or destroyed Crown timber without authorization. Together, the fines totalled more than $500,000.

WATCH: Resident Larry Pynn describes why he thinks trees are being stolen:

Larry Pynn, a North Cowichan resident, describes why he believes there has been a spike in timber theft in the area. 0:55

In North Cowichan, officials are considering increasing the financial penalties to try to deter theft at a time when lumber prices are soaring and even selling firewood can be lucrative.

According to the provincial government, the current price for two-by-fours of B.C. spruce, pine or fir is $1,420 per thousand board feet. In 2020, the average price was $570.

Cedar, which is more valuable, is currently going for $1,700 per thousand board feet.

Terry Sutherland, a professor in the faculty of forestry at the University of British Columbia, said he believes rising prices are the main driver for timber theft, and it is crime of opportunity with low technical requirements: the only equipment a poacher would need is a chainsaw and a way to haul the wood out, such as a pickup truck.

He said in order to move and sell timber legally, wood has to be imprinted with a stamp issued by the province. However a growing demand for bespoke products like rustic tables could be fuelling a black market.

For Icel Dobell, a North Cowichan resident who roams the forest reserve daily and is co-founder of a local group trying to preserve it, the issue is much bigger than just the missing trees.

Those who are hauling away the wood are driving trucks and quads into sensitive ecological areas.

“The biggest issue is this damage, this destruction,” she said referring to the muddy ruts in the ground.

She also wants to see an increase in penalties, but said the community is mobilizing and keeping an eye on the woods.

“More and more people are watching and so hopefully that will be another deterrent.”

Some residents on Vancouver Island are calling for stricter enforcement and stiffer penalties following a recent rash of tree theft in the area, which may be linked to the rising price of lumber. Around 100 trees have been taken from a forest reserve this year, including valuable red cedar. 2:24