Tottenham, Chelsea, Man Utd or Arsenal? – Alan Shearer on who will win race for top four 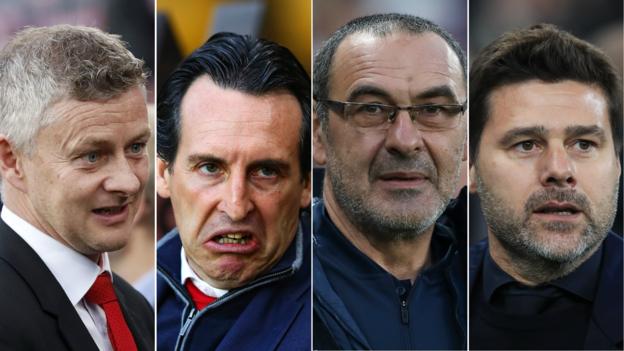 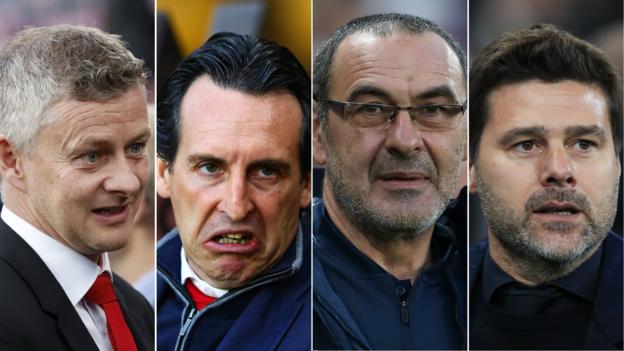 The pace being set by the Premier League’s top two is relentless but it is amazing how the teams chasing third and fourth place keep finding different ways to trip themselves up.

Between them, Tottenham, Chelsea, Arsenal and Manchester United have won only one of their past 11 matches, and all of them dropped more points this weekend.

In normal circumstances, any one of them going on a run of results the way they have done would have been left completely out of contention for the Champions League places by now.

Instead, the failings of others mean they all have a chance – although I think United’s draw with Chelsea on Sunday means Ole Gunnar Solskjaer’s side have left themselves too much to do.

United show why they are down in sixth

United should win their final two games, against Huddersfield and Cardiff, but I don’t think 71 points will be enough to get them in the top four.

They were much the better team against Chelsea in the first half and were cruising when they led 1-0, but David de Gea’s mistake for the Blues’ equaliser changed the whole dynamic of the game.

It was the latest terrible error from a goalkeeper who is quite clearly having a crisis in confidence, although I think Solskjaer will stick with him for their remaining fixtures – and rightly so, because he has plenty of credit in the bank from his previous performances for the club.

The second half at Old Trafford was a non-event really, probably because Chelsea knew a draw was a good result for their own top-four hopes.

It was only in injury time when United really came close to a winner – Marcos Rojo was lucky not to have been sent off for a terrible tackle on Willian earlier on, but nearly nicked the three points when his header was cleared off the line by Pedro.

Until then, United had shown no urgency at all in the second half which was surprising, because of their situation and also because they had started the game with a lot of energy.

Solskjaer’s side had done the same against Manchester City on Wednesday, and caused the leaders one or two problems early on, but what happened in both games shows why they are down in sixth spot.

United did not pose enough of a threat after the break against Chelsea and they were outclassed by City when Pep Guardiola’s side stepped things up in the second half.

Whether they make next year’s Champions League or not – and it looks highly unlikely now – they are miles away from being good enough to challenge for the title.

Chelsea had a late chance to win at Old Trafford too, when De Gea denied Gonzalo Higuain, but a draw keeps them in fourth, with their fate in their own hands.

It is too early to know whether this is a good season for Maurizio Sarri’s side because if they win the Europa League then they are back in the Champions League whether they finish in the top four or not. Whichever way they do it, that would mean they have had a decent campaign.

I am more worried about what next year holds for the Blues, with a possible transfer ban and because Eden Hazard’s future is so uncertain.

If Fifa upholds its decision to stop Chelsea signing players in the next two windows, then the Blues have a big decision to make about Eden Hazard, who is entering the final year of his contract.

Real Madrid will pay big money to sign him, but will there be more value for Chelsea in keeping him for another campaign even if he can walk away for nothing at the end of it?

It would be a gamble to keep him, but it also a risk to let Hazard leave if they are not allowed to sign a replacement – because, without him, they are an extremely ordinary team.

Tottenham will raise their game for Europe

Tottenham have had their own self-imposed transfer embargo since they signed Lucas Moura from Paris St-Germain in January 2018.

They are now 22 points behind City, and if they want to push on and get closer to the title next year, then they simply have to sign some players this summer.

Spurs have got the numbers to cover every position but, as we have seen from their results in their past few league games, they do not necessarily have the quality too.

They are suffering at the end of a long, hard season and I still feel they have done incredibly well to be where they are when you consider everything that has been going on, with that lack of new faces and their wait to get into their new ground.

But Pochettino’s main target at the start of the season was probably just to finish in the top four and I am pretty confident they will get what they need to do that, and raise their game when they play Ajax in the semi-final too.

Arsenal’s defence is embarrassing to watch

From the positions they are in, I think Spurs and Chelsea will finish third and fourth, meaning United and Arsenal are the teams that miss out.

It is a miracle that the Gunners still even have a chance of making the top four, but they are in the same boat as Chelsea in that the next few weeks will decide how we judge their manager’s first season in charge.

If they win the Europa League then they are back in the Champions League wherever they finish in the league, and that will be a very good season for Unai Emery’s side.

It is hard to see that happening, though, because I have little confidence in Arsenal defensively, and none at all when they are away from home.

They were all over the place at the back in Sunday’s defeat by Leicester and their defending was pathetic, even when they had 11 men.

It was embarrassing to watch. They lost 3-0 and their goalkeeper Bernd Leno was their best player.

Their defending has been their Achilles heel for a while now, but the only thing that has changed about it is that it seems to be getting worse.