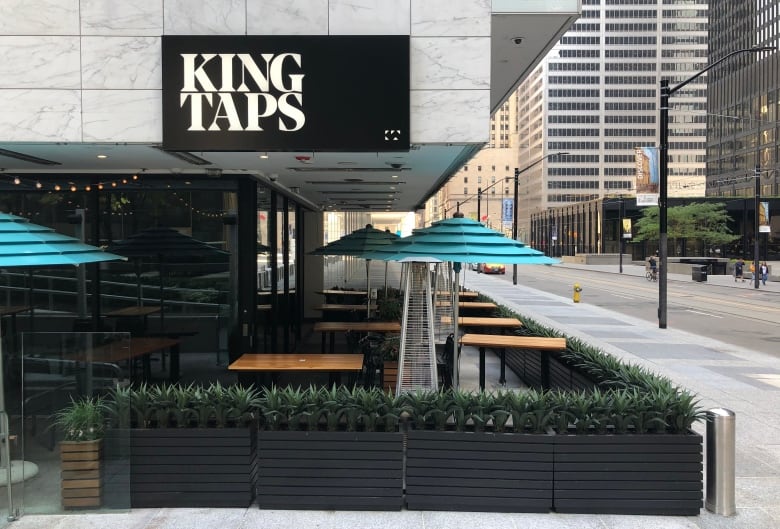 Toronto Public Health has ordered three restaurants on King Street West to close to protect the public from COVID-19.

All three restaurants are within 10 city blocks of each other.

Dr. Eileen de Villa, the city’s medical officer of health, issued the orders to the three restaurants on Friday night under Section 22 of the Health Protection and Promotion Act.

Toronto Public Health (TPH) said a fourth establishment will also be forced to close once it is served with the order. It was not named in the release.

“These closure orders were undertaken based on Toronto Public Health investigations, including contact-tracing data, which has shown that each establishment has not taken the necessary steps to sufficiently protect both the public and employees from the spread of COVID-19,” the news release said.

One restaurant in particular served food buffet style, which is prohibited under provincial regulations to slow the spread of COVID-19. Another restaurant has been unco-operative with investigations and impeded the investigation.

“Staff have also been found to be working while ill or pressured to work while ill,” the news release said.

On a sign in its window, MARBL said: “Due to unforeseen circumstances, Marbl will not be open this evening for service and will remain closed for the remainder of this weekend.”

The restaurant apologized for the inconvenience. “We will update you on our reopening shortly,” the sign reads.

A spokesperson for MARBL said the restaurant is fully complying with an order from the ministry to close its doors.

“We have done everything within our power to protect staff and guests and now, we must reassess and work alongside public health to ensure a safe and prompt re-opening. We will be keeping everyone apprised of any updates and next step,” the statement read.

King Taps, in a message on its Instagram page, said it is temporarily closed.

It said patrons who visited on Sept. 6, 9, 10 and 11 may wish to contact Toronto Public Health.

King Taps said it has taken measures to keep its restaurants safe. These include: seating groups two metres apart or with a physical barrier between tables; making hand sanitizer available throughout the restaurant; limiting group sizes to a maximum of 10 people; mandatory usage of masks by staff; use of tap and credit or payment; and rigorous cleaning and kitchen protocols.

Toronto Mayor John Tory said in the release that enforcement officials identified the specific businesses, and the city is taking action to slow the virus in the city.

“I hope this enforcement will ensure we are protecting employees and customers. Thankfully the vast majority of residents and businesses in our city are doing the right thing and following public health advice. We need that co-operation to continue so we can defeat this virus,” Tory said.

Coun. Joe Cressy, who represents the area where the restaurants are located and is chair of the Toronto Board of Health, said the city is trying to prevent new cases, and enforcement is needed now.

“New data shows that unsafe social activity at a select number of bars and nightclubs is contributing to the rise in COVID-19 cases in our city. That’s why our medical officer of health is taking swift action to shut down four high-risk establishments until further notice,” Cressy said.

“Right now, we need to stop the spread of COVID and keep people safe, while also making it possible for kids to go to school, people to go to work and public services to operate safely.”

On Friday, de Villa told reporters at a city hall news briefing that the reasons for the orders are specific to each restaurant, but the situations combined to create what she considered a “significant risk” to efforts to limit COVID-19 spread.

“These are not actions I take lightly, but I act first in the interests of public health based on the data and the facts of the matter,” de Villa said.

Once the restaurants comply with public health orders that will allow them to reopen safely, they will be allowed to resume business, she said.

“We look forward to the resolution of these matters and hope that the businesses involved will comply with all the actions required to lift the orders and allow them to return to operation in a safe manner that sustains public health,” de Villa said.

7 COVID-19 cases linked to another restaurant

TPH, meanwhile, is also notifying staff and patrons of Yonge Street Warehouse, at 336 Yonge. St., about a potential exposure to COVID-19. The establishment is not being closed, but tests have confirmed that seven people linked to the eatery tested positive for the virus. Five are employees and two are patrons.

All close contacts of the seven have been notified and asked to go into isolation.

Anyone who was at Yonge Street Warehouse from Sept. 10 to 17 is asked to monitor for symptoms for 14 days. TPH estimates about 1,700 people may have been at the venue during this time. People not already contacted are viewed as low risk.

Ontario Health Minister Christine Elliott reported on Saturday that there were 131 new cases in Toronto.

Forty-one people with COVID-19 in Toronto were in the hospital as of Friday. A total of 1,178 people have died of the virus, while a total of 15,725 people have recovered.