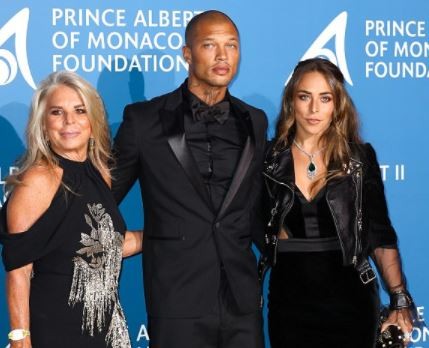 British Billionaire and Topshop tycoon, Sir Philip Green has welcomed ‘Hot Felon’ Jeremy Meeks to his family after his daughter, Chloe Green formally introduced him as her new boyfriend.

This comes days after the ex-convict officially filed for a divorce from his estranged wife of eight years Melissa Meeks.

Sources close to the family confirmed to the Mail Online that the ‘Hot Felon’ has met with Sir Philip Green, who previously dismissed his relationship with her daughter and tagged it  a ‘holiday romance’, Although they are yet to be pictured together, but it’s obvious the British Billionaire has given his approval of the controversial relationship after Meeks stepped out with Chloe and her mother, Tina, for a charity ball in Monaco last week.

An insider in Monaco also disclosed that ‘Chloe is smitten and all Phillip wants is for his little girl to be happy. She gets whatever she wants.’ It was also reported that the Billionaire family are building an apartment in their 29-storey block in Monte Carlo for Chloe to move in with Jeremy.

Confirming the report, a source said: ‘The felon is moving in with her. I’m not sure when. Philip and Tina have met him and seem to be thinking if they ride it out she will tire of him, but if they put up a fight it will only push her into his arms.’

Another source within the family denied Chloe and Jeremy are moving in together, stressing the fact that Meeks is due to return to LA next week. According to him, Chloe has a London flat and splits her time between the UK and LA to be with her ‘Hot Felon’ boo.

Meeks became famous when his mug shot went viral following his arrest in June 2014. He was jailed at the federal prison for felony charges of grand theft, possession of a firearm and was later released in March 2016.

The former convict and gangster turned model was married to Melissa for eight years until photos of Meeks and Chloe sharing a kiss on a yacht near Turkey surfaced online. Ever since then the pair have been inseparable despite the criticisms they have received.