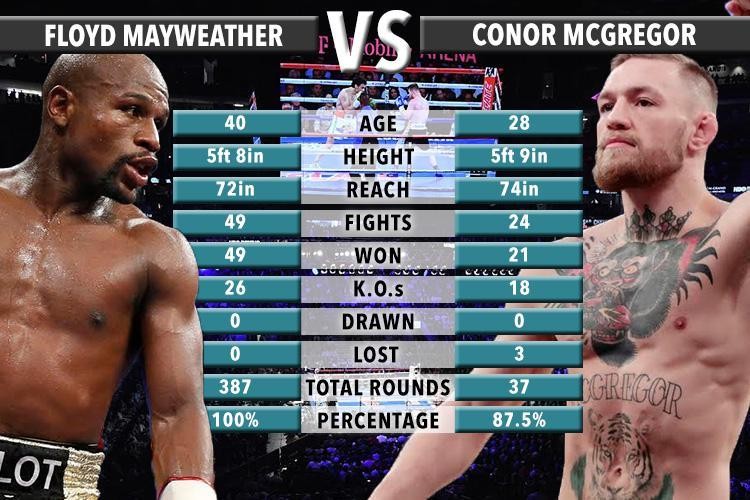 Each staredown between the two sets the stage for what should be a highly-entertaining clash.

The fascinating matchup between Floyd Mayweather and Conor McGregor is just a few days away. Let’s look at the top notes, stats and trends for this bout.

Tale of the tape

The 40-year-old Mayweather enters 49-0, the same record as unbeaten former heavyweight champ Rocky Marciano, with 26 knockouts. McGregor is 11 years younger and has a 21-3 mark with 18 knockouts in MMA. McGregor sports a 74-inch reach, two inches longer than Mayweather’s.

Mayweather will be fighting off a 714-day layoff, the longest of his career.

McGregor’s seven knockout wins since 2013 are second-most among all UFC fighters.

Inside the Numbers: Mayweather

Mayweather is the best offensive and defensive fighter of this era.

Opponents have a 19 percent connect percentage against Mayweather, the fourth-lowest defense rate among active fighters.

Mayweather has not won by a stoppage in his last seven fights dating back to 2011 against Victor Ortiz.

In his last two fights, Manny Pacquiao and Andre Berto landed 81 and 83 punches respectively, the fourth- and fifth-lowest allowed by Mayweather in a 12-round fight.

Inside the Numbers: McGregor

McGregor has seven wins by knockout since his 2013 UFC debut (second-most since 2013). He’s fought the MMA maximum of 25 minutes only once (Nick Diaz at UFC 202). McGregor is the No. 1-ranked lightweight and No. 3-ranked pound-for-pound MMA fighter according to ESPN.

In McGregor’s 10 UFC fights, 66 percent of his landed punches were to the right side of his opponents’, thrown with his patented left hand. Ninety-one percent of McGregor’s landed boxing punches are power punches.

Opponents also go to the head against McGregor, with 89 percent of their landed punches connecting with McGregor’s head.

We used video tracking to find McGregor’s accuracy on “boxing punches” in the UFC, defined as standing punches in UFC competition that would be considered legal blows in a boxing match. In his 10-fight UFC career, McGregor landed 36 percent of his boxing punches (262-of-718) while absorbing 32 percent from his opponents (212-of-671).

This is the third time in Mayweather’s career he will box someone making a professional boxing debut. The other times were in his first and fourth career fights, over 20 years ago. He won both fights by TKO within four rounds.

Since making his UFC debut in 2013, McGregor has seven wins by knockout, including his title victories over Chad Mendes, Jose Aldo and Eddie Alvarez.

Is McGregor in trouble if the fight goes long? Over Mayweather’s last 10 fights, nine have been won by decision, with his average fight time in that span being 33:36.

McGregor’s average fight time in his last 10 fights is 8:38, as he’s finished seven of his last 10 opponents. Neither fighter has been knocked down in that span.

If Mayweather can get to 50-0 with a win over McGregor, he will surpass former heavyweight champion Marciano’s 49-0 record for most wins without a loss or draw.

Marciano retired at 31 years old in the prime of his career and Mayweather, now 40 years old looks to cement his legacy in what he has said is his last fight.

This is not the first time that combat athletes have crossed over into other sports, including Mayweather himself.

Former WWE superstar CM Punk made his MMA debut at UFC 203 in 2016, losing to Mickey Gall by first-round submission. It was Punk’s only UFC fight.

Mayweather wrestled in a match at WWE’s WrestleMania 24 in 2008, defeating The Big Show.

Muhammad Ali fought Japanese professional wrestler Antonio Inoki in 1976 under mixed rules, a precursor to modern MMA (was a real match and scored a draw).