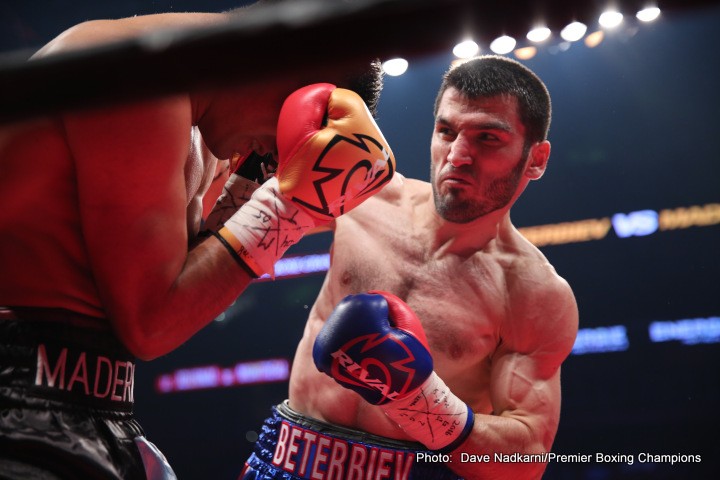 In a surprise move, Top Rank won a purse bid on Tuesday to claim promotional rights to the light heavyweight world title elimination fight between Artur Beterbiev and Enrico Koelling.

Top Rank won the right to promote the fight with an offer of $315,000, easily topping the only other bid made by Koelling promoter Team Sauerland, which bid $80,000.14 at the IBF’s headquarters in Springfield, New Jersey.

Top Rank has 90 days to put on the bout and likely will do so in late October. It plans to put Beterbiev-Koelling on the undercard of junior featherweight world titleholder Jessie Magdaleno’s mandatory defense against Cesar Juarez that is in the works.

Yvon Michel, Beterbiev’s career-long promoter, did not bid, likely because of his fractured relationship with the fighter, even though Michel says Beterbiev remains under contract. Beterbiev, however, recently sued Michel in Montreal, seeking to get a judgment that their contract was over.

Beterbiev had indicated he would go through with the bout, initially planned for Saturday, even if Michel was the promoter. But Michel shifted the location of the fight from Quebec to New York to take place on the Adrien Broner-Mikey Garcia undercard, creating more issues and causing the fight to be called off. Michel said it was because Beterbiev’s visa to enter the United States was denied while Beterbiev said his visa was in order but that the fight was called off because he refused to drop the lawsuit.

Now the fight is in Top Rank’s hands, a surprising development because Top Rank does not promote either fighter and more so because Beterbiev’s adviser is Al Haymon. Top Rank and Haymon have been adversaries for years and don’t do business with each other except in rare circumstances, such as for the Floyd Mayweather-Manny Pacquiao megafight in 2015.

Top Rank could wind up working with the 32-year-old Beterbiev for the long haul, but for now the company is looking forward to putting on the fight and beefing up the Magdaleno-Juarez card, which is being ticketed for ESPN on Oct. 31.

“We won a purse bid. We think [unified titleholder] Andre Ward is the best light heavyweight in the world and right behind him are [Top Rank-promoted Oleksandr] Gvozdyk and Beterbiev,” Top Rank vice president Carl Moretti told ESPN. “And to have the opportunity to showcase both of those guys on this platform, ESPN, in the upcoming weeks and months is great.”

Gvozdyk is scheduled to face Craig Baker on Aug. 19 on ESPN on the undercard of the Terence Crawford-Julius Indongo undisputed junior welterweight title fight in Lincoln, Nebraska.

The Russian-born, Montreal-based Beterbiev is one of boxing’s most devastating punchers and a two-time Olympian, and Germany’s Koelling, 27, will fight for the right to become one of Ward’s mandatory challengers.

“Any time Beterbiev is in the ring it’s an exciting matchup no matter who the opponent is because of his style,” Moretti said. “I can’t think of too many fighters who apply as much pressure on an opponent as Beterbiev does.”