Russia sanctions: EU vows to retaliate over US measures 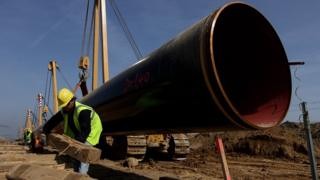 The European Union has expressed concern about US plans to impose fresh sanctions on Russia, amid concern they could hurt energy companies.

The EU Commission sounded the alarm after the US House of Representatives voted in favour of the measures, despite opposition from Donald Trump.

The bill is likely to complicate the US president’s hopes of improving relations with Russia.

It aims to punish Russia for alleged interference in the 2016 US election.

In a statement, the Commission President Jean-Claude Juncker said: “The EU is fully committed to the Russia sanctions regime.”

But he warned of “unintended unilateral effects that impact the EU’s energy security interests”.

Several European nations, including Germany, are angry because the new law could penalise companies working on pipelines from Russia, for example by limiting their access to US banks.

The legislation, which also includes sanctions against Iran and North Korea over ballistic missile tests, still needs to be passed through the US Senate before it can be sent on to the president to be signed.

It is unclear whether the president will veto it.

What concerns the White House is a measure that limits the president’s traditional right to waive the sanctions, instead forcing him to consult Congress first, says the BBC’s state department correspondent Barbara Plett-Usher.

The broad bipartisan support the legislation attracted in the House shows just how wary lawmakers are about Mr Trump’s pro-Moscow approach, she adds.

Russia’s relationship with the president has dogged his first six months in office, amid allegations Moscow interfered to help Mr Trump get elected.

What does the bill do?

The legislation, which passed by 419 to three, was described by House Speaker Paul Ryan as a sanctions package that “tightens the screws on our most dangerous adversaries in order to keep Americans safe”.

The sanctions on Russia were drawn up in part to further punish its annexation of Crimea from Ukraine in 2014. If passed, they would:

The US already has a range of sanctions in place against Russian individuals and companies over Crimea. In December, following claims of election hacking, then-President Barack Obama expelled 35 diplomats and closed two Russian compounds in the US.

How has the EU responded?

The EU says it is raising its concerns via diplomatic channels. But the Commission president says that if these are not taken into account sufficiently, “we stand ready to act appropriately within a matter of days”.

“America first cannot mean that Europe’s interests come last,” Mr Juncker added. It is unclear what sort of action he is proposing.

A spokesman for the Germany foreign ministry also criticised the bill on Wednesday, saying US politicians were conducting industrial policy under the guise of sanctions, according to Reuters.

This version of the legislation still needs to be approved by the US Senate, but it is not yet clear when it will consider the bill.

If it passes through the Senate mostly intact, the bill would provide a headache for President Trump, who has signalled a more conciliatory approach towards Moscow.

If the two chambers pass similar but slightly different bills, a committee will draw up a compromise version for approval.

Once both House and Senate have approved a bill, it goes to the president to be signed into law.

What are Trump’s options?

The bill has widespread support from both major parties in both Houses – making a veto a potentially unpopular political move.

Additionally, a presidential veto can be ignored if two thirds of both the House and Senate vote to override the president.

White House spokeswoman Sarah Huckabee Sanders said President Trump is “going to study that legislation and see what the final product looks like.”

How has Russia reacted?

“The news is very sad, in terms of US-Russia relations, and the perspective for their development. And also for international law, and international trade relations – according to what information we have on this bill.

“Our attitude will be formed after careful analysis, and the president will make his decision.”

“What has happened goes beyond the realms of common sense,” he said.

Russia had hoped that Donald Trump’s election would produce a reset in relations, and that the economic sanctions imposed over its actions in Ukraine might even be lifted, reports the BBC’s Sarah Rainsford in Moscow.

But Russian politicians argue that President Trump has been blocked in that – by a wave of “Russophobia” sweeping the US, our correspondent says.

The Kremlin continues to insist it did not interfere in the US elections.