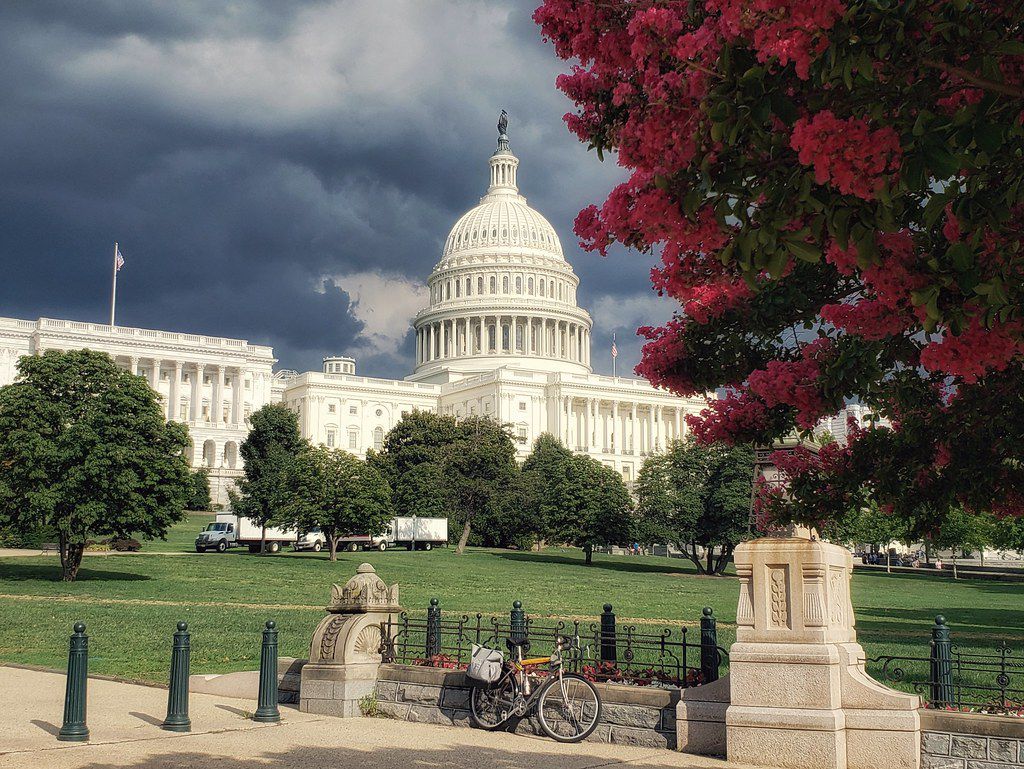 Storm clouds building in D.C. on July 24, 2019. (chasingmailboxes via Flickr)

House Appropriations Committee Chair Nita Lowey (D-N.Y.) is proposing to block the White House request over its farm bailout program, according to a draft of legislation reviewed by the Washington Post, potentially imperiling President Trump’s ability to direct payments to thousands of farmers.

A key Republican responded by attacking the Democrat’s move, saying it could threaten passage of key bill needed to avoid a government shutdown. The bailout has emerged as one of several unresolved issues that lawmakers still need to sort out in order to meet a deadline by the end of this month.

The bailout program was created last year amid complaints from agriculture groups that China had stopped purchasing their crops in retaliation for new tariffs that the White House imposed on Chinese imports. Trump has ordered that billions of dollars in taxpayer funds be paid directly to farmers as a way to offset their losses.

The Department of Agriculture is planning to spend upwards of $28 billion in payments over two years, but the Depression-era program Trump is using for the program has a $30 billion borrowing limit that they are expected to hit this year before the completion of a second round of payments.

If Congress does not act, then some of the bailout money Trump has promised farmers could not be paid on the administration’s timeline. On Thursday, a Department of Agriculture spokesman said that the money would still go out, but that the timing of the program could be impacted.

In new legislation to fund the government into November, Lowey left out of the White House request that would allow them to avert the $30 billion spending cap they are expected to hit this fall in the program being used to fund the bailout. As head of the appropriations committee, she has broad power to decide what is included in any spending bill. And lawmakers from both parties are under pressure to pass a new spending bill in the next few weeks, or they will risk a government shutdown on October 1.

Republicans suggested they might not agree to fund the government if it leaves the bailout issue unresolved. Rep. Jeff Fortenberry (Neb.), the ranking GOP member of the Appropriations subcommittee on agriculture, said Republicans would not accept any limits on the farm credit program while the trade dispute is underway.

“Farmers have been hurt; the U.S. government is appropriately responding,” he said. “It’s not clear to me whether or not this is a negotiating tactic by our friends on the other side, but I do think it’s important for America that this be resolved.”

Lawmakers from both parties are hopeful they can pass the stopgap spending bill and then continue negotiating a longer-term agreement.

Lowey’s legislation is an initial proposal that is expected to change. Democrats are aiming for the “narrowest” possible bill that would be able to pass Congress and avert the government shutdown, according to an aide with knowledge of the document not authorized to speak publicly, avoiding the farm bailout and other charged requests from the administration.

Evan Hollander, a spokesman for Lowey, said in a statement: “The American people deserve a robust debate on the costs of the Trump trade war. The clean CR that House Democrats have circulated will keep the government open and provide time for Congress to have that debate.”

Rep. Steny Hoyer (D-Md.), the number two Democrat in the House, said in a brief interview that the agreement to keep the government open would include “clean” measures agreed to by both parties.

“I am going to be talking to [Senate Majority Leader Mitch] McConnell. But we do not intend to put anything into it that we think is controversial,” Hoyer said.

Lowey added that the bill is still being worked on and that there “are many discussions going on” but that Democrats “hope to keep this bill as clean as possible.”

A number of Democrats are sympathetic to complaints from farmers in key states, particularly in the Upper Midwest, but there are growing signs that agriculture groups are pinning blame squarely on the White House for the continued uncertainty.

As part of separate trade deals, Trump is trying to pressure Japan to buy more corn and China to buy more soybeans, and he has promised farmers of both crops that they will benefit from his tactics. He continued to make that argument Thursday morning on Twitter.

It is expected that China will be buying large amounts of our agricultural products!

The rejection of the White House’s request by a top Democrat sets the stage for a potential clash with Congress over the bailout at a vulnerable moment for U.S. agriculture.

Lowey’s move is one of the first signs that Democrats may look for ways to dig in and force the White House to either make other concessions or revise the bailout program, which some critics say disproportionately benefits wealthy farmers.

Her proposal to fund the government, intended for circulation among lawmakers, is the party’s initial offer in its plan to fund the government until Nov. 21. The “continuing resolution” proposal aims to maintain the status quo while averting a looming government shutdown, which is why it sidesteps controversial requests from the administration, such as the farm bailout request.

The White House has relied on billions in direct payments to farmers to help them survive the trade war with China, as China has responded to U.S. tariffs with retaliatory actions that have devastated American agriculture.

The Trump administration is using the New Deal-era Commodity Credit Corporation as its basis for paying out the “trade mitigation” funds without Congressional approval. Earlier this month the Trump administration sent a letter to Congress asking for changes that would in effect increase how much the it can distribute through the Commodity Credit Corporation.

If Congress does not provide the additional funding in time, the administration warned in its letter to lawmakers, CCC “would have to stop making payments . . . posing a serious risk for the farmers and ranchers supported by these programs.”

Lowey’s initial proposal to fund the government does not meet that demand or other requests from the White House over farm subsidies.

Trump has promised funding to farmers in two different tranches. At least two-thirds of the administration’s initial $12 billion in bailout funds for farmers were paid out last year, while the administration said earlier this year it will spend an additional $16 billion in a second round of bailouts. More than $2 billion of that second bailout has gone out, the Department of Agriculture said earlier this month.

Close to three in 10 farmers feel the bailout payments will “not at all” make up for losses related to the tariff battle in 2019, according to an index calculated by Purdue University released this month. But about 70 percent said the bailout would either “completely or somewhat relieve” their concerns about the tariffs.

It is unclear what could happen next, although the Trump administration has already promised farmers billions in payments this year.

Some advocates have raised concerns over reports showing the bailout is overwhelmingly benefiting wealthy and white farmers. Sen. Debbie Stabenow (D-Mich.), the top Democrat on the agriculture committee, has also raised concerns about whether the administration had promised to spend more than it had the authority to spend.

In June, Stabenow said in a hearing that the CCC only had $7.7 billion left before hitting its $30 billion limit, but noted that the administration also already said it would spend an additional $16 billion in bailout assistance.

Stabenow asked if the administration needed Congress’ help with the rest of the bailout, to which USDA Undersecretary Ted McKinney responded: ““There is not an answer now, but we would not presume anything if you all have not authorized that … I don’t think funds have been obligated yet that are not there. So we respect the role of the Congress, absolutely.”

Correction: An earlier version of this story said Rep. Jeff Fortenberry (R-Neb.) was chairman of the Appropriations subcommittee on agriculture. He is the ranking Republican.