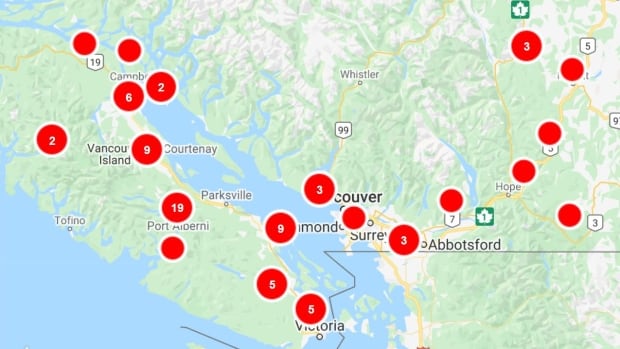 Thousands of British Columbians are still without power Saturday due to stormy weather.

B.C. Hydro spokesperson Susie Rieder said that at the height of the outages about 14,000 customers across the province were affected. Most of the outages were caused by inclement weather.

Rieder said particularly hard-hit areas include Vancouver Island, the Southern Interior and some spots in the Fraser Valley.

“Right now our crews are working around the clock to restore power as quickly as possible,” she said, adding it’s difficult to predict when power will be restored and how much damage the storm will cause.

She said every household should have an emergency kit equipped with a flashlight, batteries, first aid kit, water and food.

“We encourage everybody to be prepared,” said Rieder.

“If you do come across a downed line, always assume it’s live even if it’s not sparking, smoking or making a buzzing sound. Stay back at least 10 metres and call 911.”

A full and updated list of power outages can be found on B.C. Hydro’s outage list page.

“Avoiding avalanche terrain will be critical to managing your risk on Saturday. Stick to simple, low-angle slopes with no overhead hazard,” read the warning for B.C.’s south coast.

Drive B.C. has announced several highway closures due to avalanche work, including on the Kootenay Pass between 2 p.m. and 5 p.m. PT Saturday afternoon.

More information on road closures can be found on the Drive B.C. Road Conditions and Events page.

Environment Canada has issued several weather alerts for much of South and Central B.C. this weekend.

Strong winds, heavy snow and rain are expected in many areas throughout Saturday until the evening.

Vancouver Island could see up to 100 millimetres of rain on the west coast, with winds of up to 110 km/h on the north coast.

Between 25 and 35 centimetres of snow is expected for Squamish, Whistler and the Sea-to-Sky corridor, while areas of the Central and North Coasts could see up to 40 centimetres, the weather agency said.