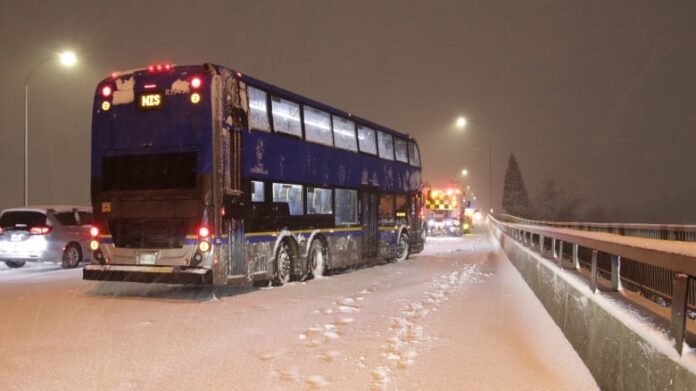 More than 30,000 people on B.C.’s South Coast were without power while a bridge connecting parts of Metro Vancouver was closed Tuesday night as snow continued to hit the region.

B.C. Hydro issued a notice advising residents on Hornby Island and Denman Island to prepare to be without power until Wednesday morning, as ferry cancellations means crews cannot get over to make repairs.

“We plan to have crews take the first available ferry in the morning,” B.C. Hydro says on its website.

In an interview with CBC, spokesperson Mora Scott said most of the outages seem to be due to snow weighing down trees, and ultimately, taking out power lines.

A northbound lane opened later in the evening while southbound remained closed, DriveBC said, adding that motorists should expect delays in the area and consider alternate routes.

Snow began falling on B.C.’s South Coast Tuesday afternoon and, combined with high outflow winds in the forecast, could create hazardous driving conditions across much of southwestern B.C.

Up to 25 centimetres of snow is forecast for inland parts of Vancouver Island, with around five to 10 centimetres in southern areas, according to Environment Canada.

Strong southeast winds through the Strait of Georgia, gusting up to 90 km/h, are expected.

The Sunshine Coast is looking at 10 to 15 centimetres of snow with winds of up to 80 km/h.

Higher elevation areas like North Vancouver, Coquitlam and Maple Ridge could see up to 20 centimetres, while Richmond and Delta could expect five to 10 centimetres of snow. 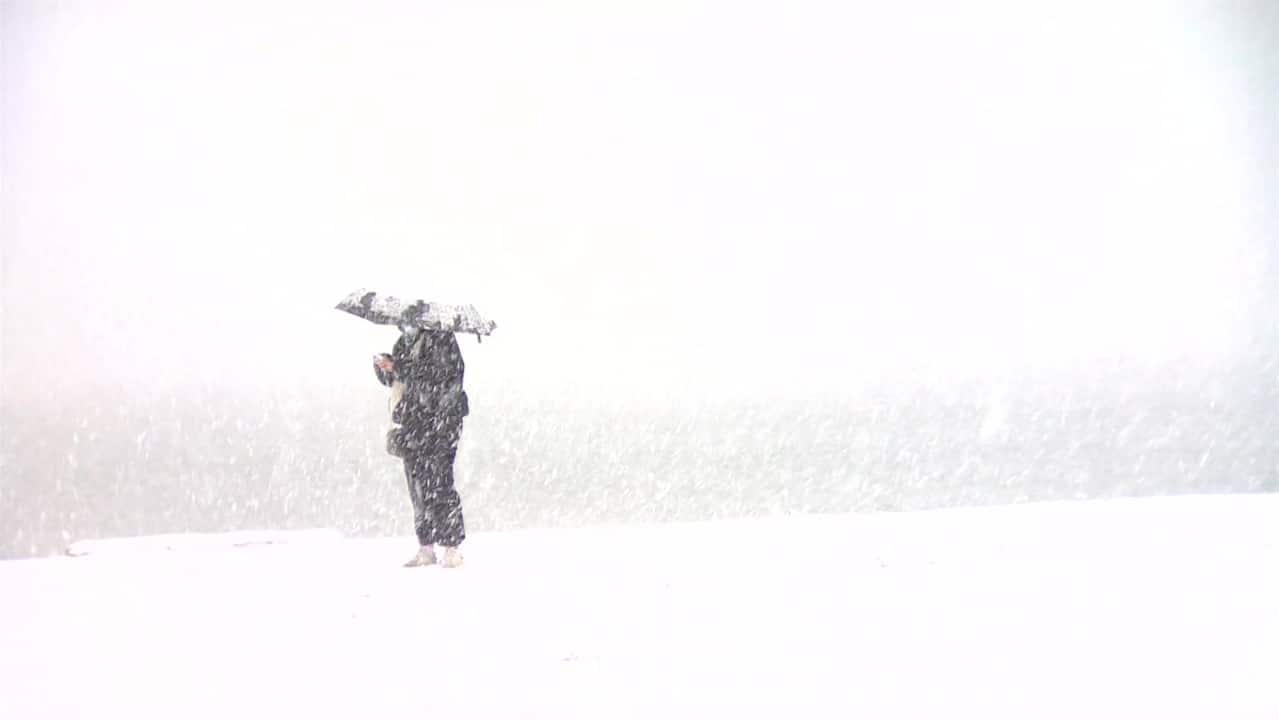 Snow began falling on B.C.’s South Coast Tuesday afternoon and is expected to continue through Wednesday.

Environment Canada also issued winter storm warnings for highway routes including the Sea to Sky, the Coquihalla and the Okanagan Connector, saying heavy snow and strong winds could create near-zero visibility at times.

As of 4:30 p.m. on Tuesday, travel advisories were in effect for many of B.C.’s highways, according to DriveBC.

The snow is expected to taper off or switch to rain by Wednesday morning, potentially causing slippery roads and poor visibility.

Yimei Li, a meteorologist with the federal weather agency, says snow will be accompanied Wednesday morning by strong winds with gusts ranging between 40 and 70 km/h, and recommends avoiding all non-essential travel Tuesday evening and Wednesday.

“If it changes from snow to rain the results will be quite messy. Tomorrow morning we’re looking at some really high impact weather for the Lower Mainland,” Li said.

Snow weighing down branches in combination with wind gusts could cause tree branches to break.

“The best thing to do is stay at home or stay sheltered during this time. Travelling during a snowstorm is very dangerous,” Li said.

Several flights leaving Vancouver and Abbotsford airports Tuesday and Wednesday have already been cancelled in anticipation of rough weather.

Vancouver International Airport (YVR) has asked travellers to leave extra time to get to the airport and check with airlines for updated flight information.

YVR warned of delays Tuesday night after an arriving EVA Air flight exited the runway while making its way to the gate, and got stuck in the grass adjacent to the north runway shortly before 7 p.m.

There were no reports of injuries, according to YVR. The airport did not state if weather was a factor in the incident.

The airport said the north runway is not available for arrivals and other flights may experience delays.

Mainroad, the company contracted by B.C.’s Ministry of Transportation and Infrastructure to clear snow, said staff were patrolling and ready to start plowing as soon as snow starts hitting the ground.

“Our crews work 24/7, so they’re out there all the time watching road conditions and making sure that it’s safe,” said Darren Ell, general manager of Mainroad.

Ell warned drivers to avoid travel unless their vehicle is prepared and they are comfortable driving in the snow.

“If you come across a plow, just stay behind them. They go slow, but they’re out there making the roads safe, it’s the best place to be. Stay back, don’t pass,” he said.

The City of Vancouver said its crews were monitoring and salting major roads, bus routes, bridges, sidewalks and streets adjacent to hospitals.

Sidwell said residential streets are not salted or plowed by the city, with the exception of access routes to schools or hospitals and some steep hills.

TransLink is in communication with municipalities to ensure routes are plowed, spokesperson Dan Mountain told a news conference on Tuesday.

Mountain said crews were out applying de-icer to trolley wires and power rails, and they have replaced several 60-feet articulated buses with 40-feet buses, which he said are more agile in the snow.

“We’re going to be communicating out to customers as soon as we know of any delays. Right now, the system is running really well.”

The cold snap has prompted the opening of warming centres across the region, in addition to regular temporary winter shelters.

An additional warming centre at the Odd Fellows Hall in Fairview opened at 9:30 p.m. PT Tuesday.

“Our biggest concern is always for our community members and trying to make sure that there are spaces for them to go inside,” said UGM spokesperson Nicole Mucci.

Mucci said people wanting to help can donate winter gear to the UGM on 601 East Hastings St. They are in need of items like waterproof jackets, pants, gloves, toques, scarves, and heat packs.

“Even if folks are able to get to a shelter at night it doesn’t always warm up in the day so you still need that gear to stay warm.”