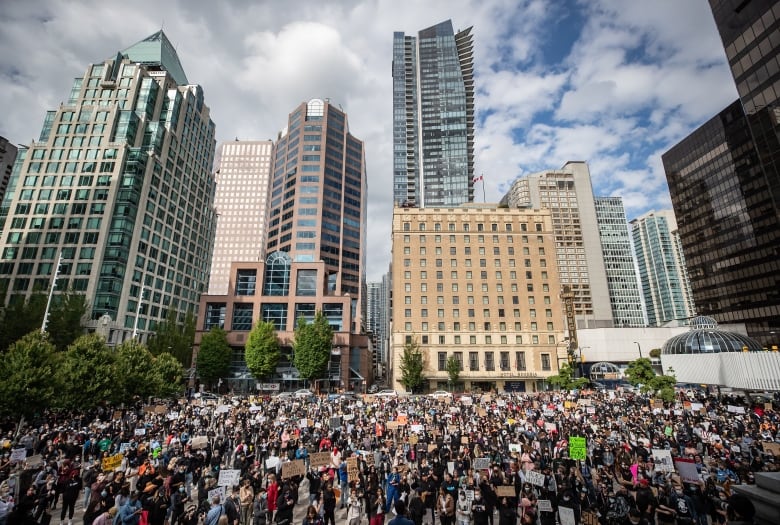 Thousands of people gathered in front of the Vancouver Art Gallery Sunday for a peaceful protest against police violence and white supremacy, following days of protests across the U.S. over the death of George Floyd, a handcuffed black man who died last Monday as a white Minneapolis police officer pressed his knee into Floyd’s neck.

All streets surrounding the art gallery were closed to traffic as Vancouver police at the event told CBC News the crowd had swelled to an estimated 3,500 by 6 p.m. PT.

Many of the demonstrators wore face masks, held signs and chanted, “Black lives matter” and, “No justice, no peace.”

At one point, the only sound was the wind as the crowd raised their fists in the air and held a moment of silence.

Floyd died May 25. The officer who pressed his knee into Floyd’s neck, Derek Chauvin, faces charges of third-degree murder and manslaughter.

Vancouver police now estimate around 3,500 people have gathered around the art gallery. Speakers continue to share stories of oppression. All surrounding streets have been closed <a href=”https://twitter.com/cbcnewsbc?ref_src=twsrc%5Etfw”>@cbcnewsbc</a> <a href=”https://t.co/sKVO2KEcwO”>pic.twitter.com/sKVO2KEcwO</a>

One of the organizers, Jacob Callender-Prasad, told CBC News before the protest that it would include speeches and a candlelight vigil for Floyd and Regis Korchinski-Paquet, a Toronto woman who apparently fell to her death from a balcony on Wednesday.

It’s an opportunity for the local black community to share their own experiences, show solidarity with protesters in the U.S. and acknowledge Canada’s own troubles with racism, he said.

While protests in the U.S. have descended into violence, with looting in cities from New York to Seattle and police firing tear gas and rubber bullets at protesters, Callender-Prasad said public safety was a top priority for Vancouver’s demonstration.

“We hope to keep this just peaceful … so we can unite on an issue that is important to everybody,” he said on Sunday.

Organizers encouraged physical distancing and handed out masks, gloves and hand sanitizer, said Callender-Prasad, who added he is not affiliated with any specific group.

Anyone who feels sick was asked to stay home.

The Vancouver chapter of Black Lives Matter said it would not participate in this protest.

“We do not feel that we can ensure the safety of our community in public protest at this time,” the group said in a Facebook post.

“Furthermore, the family of Regis Korchinski-Paquet, has asked that no protest be held in their daughter’s name. We will respect that. Right now, our priority and concern is keeping Black people safe and promoting some rest.”

Demonstrators marched through the Downtown Eastside on Saturday night to protest Floyd’s killing. It ended after a few hours with no arrests.

Before the event Sunday, the Vancouver Police Department said it was aware of the planned protest.

“Our primary purpose is to protect the safety of the protesters, the public and the police,” Sgt. Aaron Roed said in an email.

“We respect peaceful protests and, during public demonstrations, police response is proportionate to the activities observed.”

Police could be seen standing among the crowd during the protest. At one point, two officers kneeled on one knee for a photo with a protester.

The protest ended about two-and-a-half hours after it started.

No one was arrested.