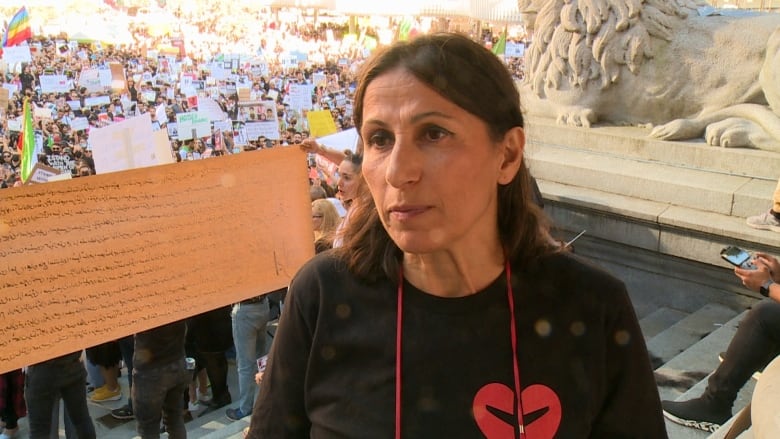 Thousands of people gathered on the steps of the Vancouver Art Gallery on Sunday then marched through downtown calling on Iran to end laws requiring women to wear hijabs in public as well as to abolish the country’s use of capital punishment.

It’s the second protest this week in Metro Vancouver following the death of Mahsa Amini, 22.

The Iranian woman died last week after she was arrested by Iran’s morality police for “unsuitable attire” after she allegedly wore a hijab improperly.

Her death has reignited anger over restrictions on personal freedoms in Iran, including the strict dress codes for women and an economy reeling from government sanctions.

Protests over Amini’s death have spread across at least 46 cities, towns and villages in Iran. There has also been condemnation from Western countries and the United Nations, as well as protests in solidarity abroad.

On Sunday there were protests in London where violence broke out. In Canada, a protest similar to Vancouver’s was held in Ottawa.

Tammy Sadeghi was one of the organizers of the rally in Vancouver on Sunday.

“We’re here to support the Iranian movement in Iran, especially since women came onto the street because they have been fed up with this regime the last 42 years,” Sadeghi said.

“They’ve been fighting day and night to push back the Islamic regime.”

Many at the rally said they want an end to laws that require women to wear hijabs. They also want an end to capital punishment in Iran and the release of political prisoners — all examples of the regime’s brutality.

Iranian police have denied mistreating Amini and claim she died of a heart attack. The country’s authorities say they are investigating.

Protests in Iran have resulted in the deaths of both protesters and police and the arrests of demonstrators.

Honieh Barzegari said she attended the rally in Vancouver to speak out for human rights in Iran. She said she was impressed with how diverse the crowd was.

“We need to stay united, not just Iranian people. We want the world to stand with us. Hold our hands, tap on our shoulders and be our voices,” she said.

Share
Facebook
Twitter
WhatsApp
Pinterest
Linkedin
ReddIt
Email
Print
Tumblr
Telegram
Mix
VK
Digg
LINE
Viber
Naver
Previous articleInside a Montreal ER, the ‘tip of the iceberg’ of a failing health-care network
Next articleJupiter will be its brightest in 59 years Monday. Here’s how to see it for yourself