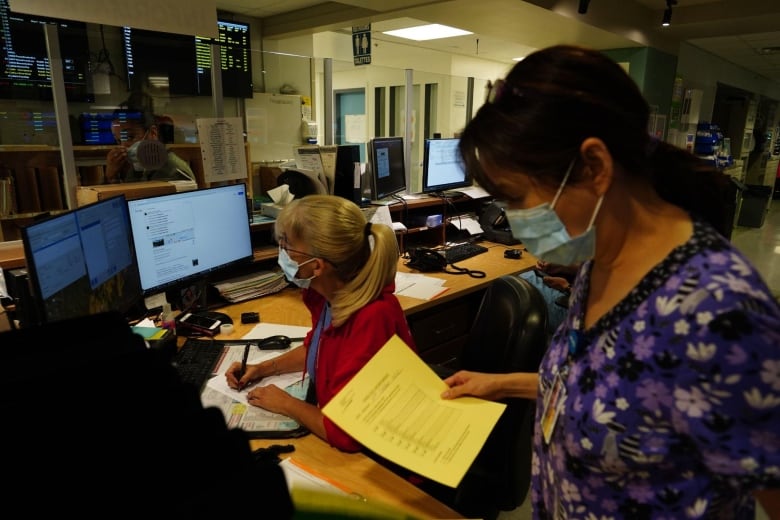 On its busiest days, the Lakeshore General Hospital emergency room is so stretched for space that patients on gurneys line not just every hallway, but even the narrow passageway in front of the nursing station.

“You can imagine that’s not a great place for a sick patient,” said Tim Heeley-Ray, the hospital’s chief ER co-ordinator, on a rare tour of the ward at the only hospital in Montreal’s West Island.

It’s unusually quiet on this particular morning, but throughout the pandemic, the Lakeshore’s ER has rarely been below 100 per cent capacity. It’s not uncommon for the ER to exceed 200 per cent.

“When it gets there, it’s hard to provide good care for anyone,” Heeley-Ray said. “I just hope people know that it hurts us almost as much as them when they don’t get quality care.”

Asked to sum up what it felt like in the ER at the Lakeshore during the pandemic, Heeley-Ray chose these words: “difficult, challenging, understaffed and too small.”

Emergency rooms traditionally bear the brunt of a failing health-care network: when there are long wait times and patients remain on stretchers in the hallways for days, it’s a clear sign there are problems elsewhere in the system.

“We often say that ERs are the tip of the iceberg. So it’s just what people see; what shows,” said Dr. Judy Morris, head of the Quebec Association of Emergency Physicians.

“When there’s lack of beds, lack of personnel across the health-care network — primary care, specialized care, operating rooms, long-term care, CHSLDs — if there’s not enough capacity in those settings, it’s going to show up in ER, because it is essentially the only door that’s always open 24/7 for the patients that seek care and cannot get it elsewhere.”

In the Quebec election campaign, fixing the health-care system ranks second only to the environment as the top issue among those who have taken part in CBC’s Vote Compass.

The parties have made a wide range of promises to improve services that would lighten the burden on ERs, from improved access to primary care to more home care for seniors.

Heeley-Ray acknowledges the problems plaguing his hospital aren’t unique, but rather part of a broader failure in the health-care system.

“I think you could talk to people who have positions like mine at any Quebec emergency, and the rhetoric will be the same. We have the same comments, concerns, questions about how to fix things.”

But he added, “I think ours are particularly severe, and our statistics prove it. We’re frequently in the most over-capacity.”

‘We give as much as we can’

The Lakeshore General Hospital, built in 1965, has been a subject of controversy throughout the pandemic, despite innovative efforts to control the spread of the virus.

In February 2021, a woman was found dead on the ER floor. In January 2022, an elderly patient with dementia was sent home alone from the ER in a taxi. This past June, the union warned staffing shortages were so acute the “situation is no longer safe in the emergency room, both for the population or for our members.”

Short-staffing has not abated since then. In an interview on the ER floor, Tania Pellizzari, the unit’s head nurse, said the mere task of filling out the schedule has been difficult.

Pellizarri, who works both to provide patient care on the front line and as an administrator, said her staff has done the best it can under the circumstances.

“Our primary goal is to provide effective, safe care to our patients, but also to ensure that the environment for the nurses and the staff are also adequate and safe. And those are things that are our biggest challenges right now,” she said.

“We give as much as we can, and it’s very hard, with the fatigue.”

There have been promises to make improvements to the hospital for years. Months prior to its defeat in the 2018 provincial election, the Liberal government of Philippe Couillard committed to pay for a new ER.

The local MNA at the time was Liberal Geoffrey Kelley. His son, Gregory Kelley, replaced him as the MNA for Jacques-Cartier. Now seeking re-election, the incumbent said, in an email, the “new ER is a top priority for me.”

“I will continue to fight for better conditions at the only West Island hospital,” Kelley said.

The CAQ candidate in Jacques-Cartier, Rébecca Guénard-Chouinard, said the renovation of the Lakeshore’s emergency room is still being studied, and she’s committed to the ER’s upgrade.

A growing – and aging – population

The Lakeshore serves more than 300,000 residents in Montreal’s West Island, along with thousands of others from the Vaudreuil-Dorion area, one of the fastest-growing regions of Quebec. (Construction is set to begin on a long-promised hospital west of the island, but it will not be finished until 2026.)

Many of the Lakeshore’s ER clientele are elderly, and the care they require is often too complex to be treated in an emergency room, Heeley-Ray said.

“We get paper rosters of who’s in the department, and sometimes you get to the 10th or 11th patient before you find someone under 80,” he said.

“People that age have medical problems. And they’re not just medical, they’re often social and heavy.”

At the Lakeshore’s ER hub, where doctors, nurses and co-ordinators share charts and discuss treatment options, there’s a colour-coded tracking board showing the status of each patient.

Any colour other than white or red means the patient has been assessed and admitted, Heeley-Ray explained.

Most of the names are in green, purple or yellow. That means they could be moved elsewhere in the hospital if there was a place for them to go.

“If the hospital was big enough, the emergency patients would have room,” he said.

The Lakeshore’s administration has taken new approaches in an attempt to ease the pressure.

Heeley-Ray is the medical director of the new “rapid access clinic,” a few floors up from the ER. It is designed to serve as a “pop-off valve”  for the emergency room.

“If we have a patient there till eight, nine, 10 at night, and we know something’s going on but they could sleep at home, they sleep at home,” he said.

“They come back here to the rapid access clinic the next day, and it’s really just a next-day continuation of the ER visit.

“Anyone we can take off a stretcher overnight is a victory for us, at this point.”

Heeley-Ray said he hasn’t been following the Quebec election closely — he’s too busy at work — but he believes the solution is simple, even if getting there may not be.

“Time, space and people,” he said. “If we had a bigger emergency and a bigger hospital and more people, this would manage itself.”