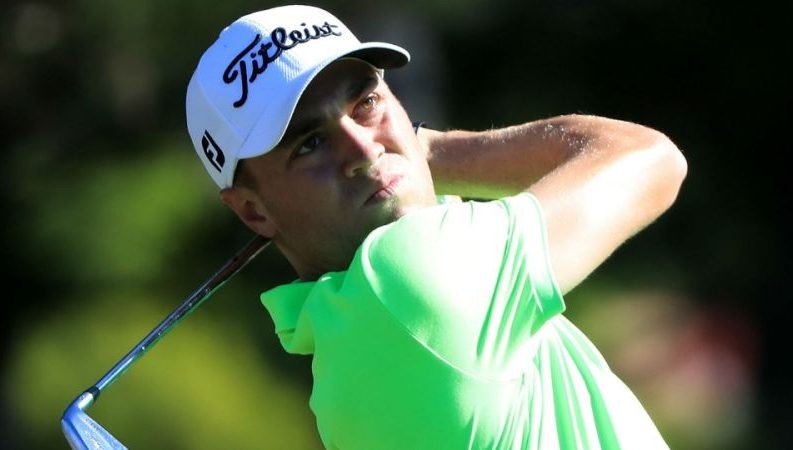 Justin Thomas fired a record-breaking nine-under-par 63 to seize the lead at the US Open in a dramatic third round dominated by low-scoring on Saturday.

The 24-year-old world number 13 produced a magnificent eagle three on the 600-yard 18th hole to crown a spellbinding display that was the lowest to par score in the tournament’s history.

The previous lowest score in relation to par was the eight-under 63 shot by Johnny Miller in the final round of the 1973 Open.

Thomas was already on course for a share of the lead as he stepped up to the 18th having carded nine birdies against two bogeys in a spectacular round.

He then drilled a 300-yard second shot to around eight feet before rolling in his eagle putt to roars from the galleries at the Erin Hills Course in Wisconsin.

It was a remarkable charge from Thomas, who first came to prominence as an unknown 16-year-old at the 2009 Wyndham Championship when he astounded the field with a bogey-free 65.

Thomas’s 18th-hole masterpiece allowed him to put clear daylight between himself and the chasing pack in the crowded upper reaches of the leaderboard.

England’s Tommy Fleetwood and Brian Harman were his closest rivals, just two shots back on nine under.

Fleetwood and Harman still had most of their back nines to play as Thomas relaxed in the clubhouse and reflected on his record round.

“I feel comfortable. Being in contention in a major is new and I’m excited,” said Thomas.

“I hope the moment will come as soon as possible. I know I’m going to be nervous, I just need to harness that as best I can.”

The traditional moving day lived up to its reputation with a number of players exploiting benign conditions to tear into the forgiving par-72 layout.

As well as Thomas, compatriot Patrick Reed was one of the biggest early movers, surging up the field with a dazzling round that included four birdies on the front nine against one bogey.

The American Ryder Cup star then bagged a trio of birdies on the 14th, 15th and 16th holes to thrust himself into the fray at eight under, three back from Thomas.

Reed, a fiery member of the US Ryder Cup team, said he had benefited from taking a more relaxed approach to the major.

“Every time I’ve been in majors so far, my first two years, I’ve put so much emphasis on them and tried so hard at them that I kind of got in my way,” Reed said.

“And at the end of the day add them up and see how you do. Seems to be working pretty well.”

With the world’s top three ranked players – No 1 Dustin Johnson, No 2 Rory McIlroy and No 3 Jason Day – all missing the cut, the leaderboard was shorn of star power.

None of the leading pack have won a major before, making it likely that a run of six consecutive victories by first-timers could extend to seven this weekend.